I always enjoy reading Sue Moorcroft's books and was delighted when she agreed to tell us about her Brilliant Book Moment. 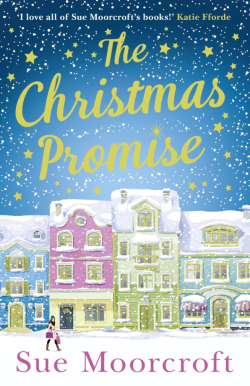 Over my time as a writer I’ve been fortunate enough to experience some wonderful highs – readers telling me that one of my books helped them get through a bad time, characters receiving their own fan mail, winning or being nominated for awards, and lovely messages from readers and great reviews.

On 16 December 2016 something happened that topped even those marvelous things.

I received a message from a friend to ask if I’d seen the Amazon ranking for my latest book, The Christmas Promise, that morning. I had checked it, of course, because it had been in the top ten in the UK Kindle chart for a couple of weeks, latterly the top five. I’d seen that I was back up to #2, which was great, because I’d been at #2 and then drifted between #2 and #4. I joked that I’d finally shifted above another book in the rankings, one that had been #1 for ages, just as somebody found and published hitherto unseen manuscripts from the great Georgette Heyer to take over the top spot.

After a few minutes I checked the Top 100 list on Amazon again – and screamed. The Christmas Promise was #1!

Shedding tears of joy I dashed onto Twitter to alert my editor, Helen at Avon Books, only to find she’d got there first with an excited message of congratulations. My agent, Juliet at Blake Friedmann, wasn’t far behind.

I rushed to tell family members, best friends, my street team, Facebook, the world. My heart was hammering and I honestly could not stem the flow of tears, particularly as one of those I couldn’t tell was my mum, who had left us the previous March. 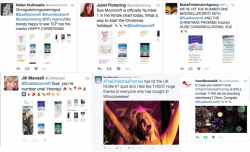 Messages poured in. My phone and my social media streams were red hot. I told the friend I’d been messaging earlier and she pointed out that this was she’d been trying to tell me – that I was #1!

I was truly euphoric. April 2016 had marked twenty years since I sold my first short story to a national magazine, which I’d felt made me a ‘proper writer’. Since then I’ve sold over 150 short stories, six serials, dozens of columns, a writing ‘how to’ book, a novella and eleven novels (one yet to be published). You can see why, at my book launch for The Christmas Promise, I said it had taken me twenty years to be an overnight success! 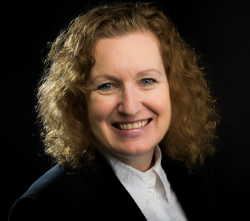 When I began to work with Juliet and then Avon Books, an imprint of the mighty HarperCollins, I had hopes that The Christmas Promise and the next book in the contract, Just for the Holidays, would meet with success. But a #1 best seller? That was wildest dreams territory.

Thank you to everyone who bought, reviewed or just talked about The Christmas Promise! I rounded off the day with champagne and a rather large bar of Swedish chocolate.

I may have had a small headache in the morning.

FIND OUT MORE ABOUT THE CHRISTMAS PROMISE

FIND OUT MORE ABOUT SUE MOORCROFT