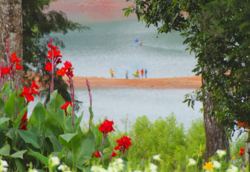 Dinah sold a copy of The Tea Planter's Wife every 47 seconds on average this past year and she kindly put together a little tour of research locations and inspiration in Sri Lanka for us. The book is amazing!

My arrival in Sri Lanka was not so different from my character Gwen’s arrival in The Tea Planter’s Wife. Except that she set foot on Sri Lankan soil ninety years ago, when it was still called Ceylon. She would have been assaulted by the same intensity of light, by the brilliance of the clothes, by the cacophony of bells, hooters and people yelling, just as I was. And nothing prepares you for the heat that hits you like a solid wall.

We spent one blissful night at a restored ancient home, breathing the seductive scents of cinnamon and jasmine, before travelling up country the next day. In the novel Gwen describes the terrifying hairpin bends and deep ravines of the car journey. For me the tension of being in a car mingling with dogs, pedestrians, rickshaws, bullocks, bicyclists, at least for part of the way, plus daredevil driving practices, meant that I frequently closed my eyes. 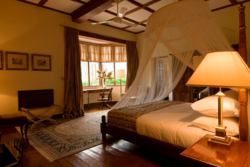 But I opened them when we arrived in tea country and pulled up at Ceylon Tea Trails, Castlereagh  – a restored tea planter’s bungalow, beside a lake, with amazing views of luminous tea bushes and distant blue hills. I felt as if I’d landed in heaven. Two butlers in local dress met our car and guided us to a beautiful sitting room overlooking the lake. They handed us each a tall drink, which I can only describe as nectar of the Gods. I don’t know what it was, but we were hot and sweaty and its ice-cold sweetness was revitalizing. The word bungalow doesn’t convey the luxury of the house with its polished floors and well stocked gardens. It had only five (enormous) bedroom suites, and we were encouraged to regard it as our second home. 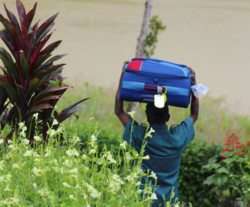 It quickly became just that. The butlers would glide in and out soundlessly, attending to our every desire: pots of Ceylon tea, beautiful cakes, gorgeous cocktails. If you wanted something they didn’t have, they’d get it for you. It was the full colonial experience and brilliant research for the novel. A highlight was the extensive library. When I wasn’t mesmerised by the shifting colours of the lake, or the women tea-pickers in their brightly coloured saris, I had my nose in books describing the old days of the British in Ceylon. At night, when the air exploded with the sound of buzzing insects and singing cicadas, we lingered outside gazing at fireflies darting about and the reflections of flaming torches shimmering in the lake. Incredibly romantic.

At the end of our stay an immense monsoon washed the road away – not so romantic – and we had to leave for England by canoe. The gardeners carried our cases on their heads; the luggage went in one canoe, while we, after having our ankles checked for leeches, climbed into the other. A tight fit, but an amazing end to an unforgettable adventure.