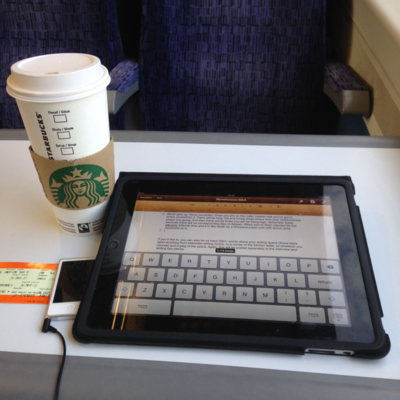 My writing space is courtesy of Southeastern Trains. For the price of a day return (peak price as well!) to Maidstone East they give me a desk (sometimes) and no Internet to distract me. I try and get the 6.36 train every morning from Victoria, I've discovered that this train usually has tables, is relatively empty and my internal editor is still half asleep so I can get stuff past her.

By the time I’m sitting on the train, I’ve warmed up my imagination by posting Facebook and Twitter updates about the fantasy commute I have in my mind. It is a commute where each morning there is a flash mob of guards who sing and dance me on my way to the train. One day I’m going to write about it. I have the name – The Secret Life of Wendy Miller Aged 43 3/4

Once at my seat I get out my iPad, my sound cancelling headphones, country music on my iPod nano (mostly Kenny Chesney because that is the way I roll) and the largest decaf no fat latte that Starbucks do. By the time the train is leaving the station I’m already writing.

If I remember to leave my ticket out for the ticket collector to see, I have an undisturbed 50 minutes of writing time. It would be longer but when we get nearer Maidstone the school kids invade.

I know it is an odd writing office, but I have a set table I always try and get. There are the same people I see every morning, we nod at each other and then make sure we have the optimum amount of space between us all and sit in silence. Perfect. The commute home isn't quite as good; there isn't always a table and people talk. Shocking! But sometimes, if I’m lucky, I can get another half hour done.

No One Wants To Be Miss Havisham by Brigid Coady is out now.