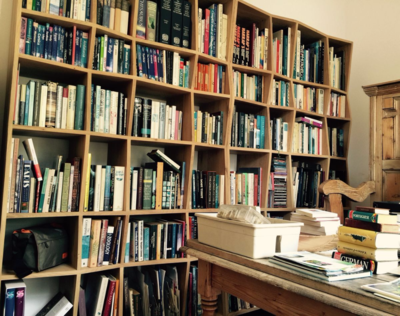 I LOVE building, creating spaces. Sometimes I wonder whether in my sleeping hours I am moonlighting as an architect. When we bought our ruin of an Olive Farm in the south of France I was in horror and fear of the structural work it required, but over the years I have become a bit of a dab hand at construction.

And when I get an idea, there’s no stopping me. Two or three years ago when I found myself with a bit of spare cash for the first time since we acquired this old place, I decided to create myself  “a studio”. Not just any studio but a large sprawling hideaway where I could write, listen to music, watch films, make coffee, have a shower or a nap if I fancied one and even trot five steps to the swimming pool outside. It needed to be a considerable expanse that could accommodate all my clutter. I write in chaos, surrounded by PILES of books, notes, pictures, files… chaos. In my new studio, everything would be organised; everything in its place…

We live in a green belt, so construction of another building was out of the question. So I set my sights on the garage which, since we’d moved here, had never seen a car pass through its rotting sliding doors. Not only did I decide to take the garage but two horse stables abutting it as well. 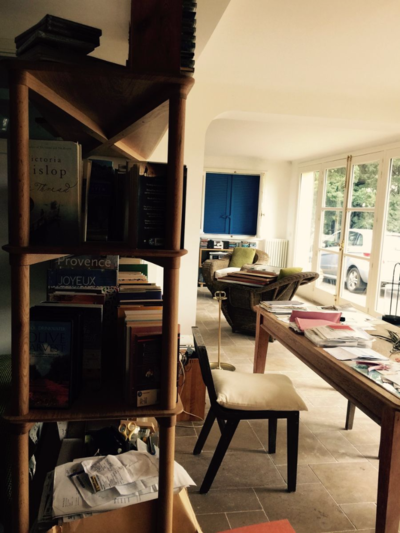 ‘That’ll be a sizeable office,’ warned my loving husband who thought I was losing all reason.

‘Ah, but it is not intended as an office. It is to be a studio… where I can house everything I need, sliding each item neatly into its corner, and I can do everything but live there if I want to.’

He nodded and left me to it. 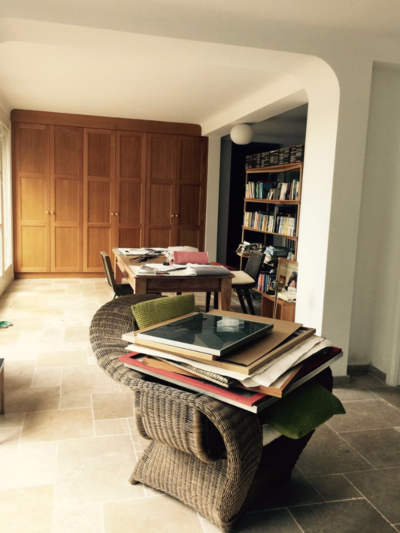 I set to work designing my dream studio.

It involved the removal of our 3,000-litre oil tank that feeds the central heating system, choosing another corner for that beast and then, once the space had been cleared out, fairly major reconstruction works including new floors, walls and ceiling. So, yes, pretty major works. Like all these endeavours, once you get cracking and the team arrives to start knocking everything to bits, a zillion problems and challenges arise. But, hey, I love building, don’t I? Halfway through the process, the team, which consisted of three wine-tippling Portuguese each called José, they discovered that none of the walls were aligned and that, unless we demolished and rebuilt all of them, I would be working in a very wonky room. It took months and then months again, by which time I was stony broke and could not afford to furnish it. 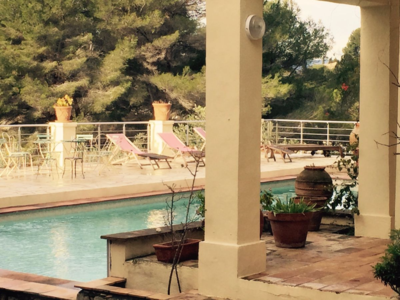 Almost two years later, I moved into it. It took a while to get used to it. It was so clean and neat and large after my more cramped room in the main body of the house, but now I love it. And I have recently installed electric sliding shutters so that I can close myself away from the world and write like a loony, surfing through every emotion or climate or time zone I fancy,  or I can have all the doors and windows wide open, listen to the birds and watch the hounds snoozing in the sun, content that their mistress is typing busily, earning the price of a few cans of dog food. However, it’s not neat. The piles are creeping back. Books, DVDs, CDs seem to appear from nowhere as though multiplying in the night. The chairs are stacked with pictures waiting to be hung, the bookcases are bulging… Very soon, new bookcases will need to be ordered and then I will probably need to build myself somewhere a little larger.

The Forgotten Summer by Carol Drinkwater is out now.