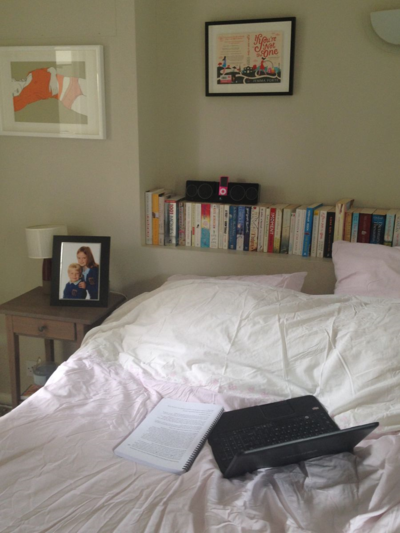 I once sat next to someone at a dinner who told me he was determined to write a novel so had decided to live in solitude, in a log cabin, in Canada, for three months over the summer.

That was about five years ago and I know for a fact his novel still remains unwritten , proving that perhaps the time spent organising his writing retreat in Canada might have been better spent … writing.

I vividly remember deciding at the time not to say what I was thinking, which was that travelling half way round the world in order to write a book seemed a little unnecessary and very expensive when he could just as easily make a start in his kitchen.

Of course, don’t get me wrong, it would be fabulous to be so rich that I could write with a view of my own infinity pool whilst a team of nannies entertained my children in the hot sunshine of the tropical island I’d purchased with the royalties from my latest tome. Though, I do wonder if I’d actually get any work done in that scenario. Between you and me, there’s a huge possibility I’d abandon my laptop altogether and end up lounging round aforementioned pool, chowing down on crisps and dip, pouring mojitos down my gullet, listening to tunes and lounging like a veritable lizard. Though unless I suddenly turn into Jeffrey Archer (heaven forbid), I guess I’ll never know.

In reality I write in bed. In a peaceful bedroom. Actually peaceful is a tad on the dishonest side. I live in the leafy enclaves of South West London pretty much directly under the Heathrow flight path, so it’s not hugely peaceful in the summer when the window’s open and it sounds like a plane is about to land on your actual head roughly every seven seconds or so. But the paint on the walls is a lovely peaceful  grey colour and I’ve learned to live without oxygen unless it’s truly sweltering and to truly appreciate the merits of double glazing.

Anyway, this room I speak of is in a three bedroom terraced house, where I live with my two kids and on occasion my sister’s cat. 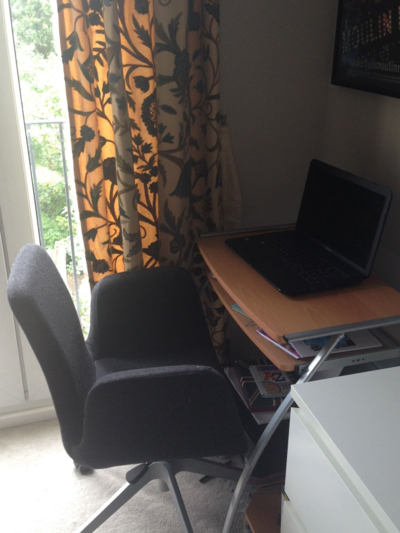 The only desk I have room for within the house is very small. It’s less a desk for a glamorous lady novelist, more a sort of rubbish computer table you’d expect to see a sixteen year old revising for their GCSEs on back in the 90s when tables such as this were trendy. I do sit here sometimes, but more often than not am tempted to move back over to the bed, despite knowing that after a month or so of intense writing time, this will eventually lead to terrible backache and the urgent need to see an osteopath. (Such a rebel!)

It suits me fine writing in here. I personally don’t think a writer needs to be surrounded by natural beauty and stunning scenery to be inspired. If you’re passionate enough about your idea, you’ll find the time to write wherever, even with other jobs, children and life to juggle. Though I do advise being near a kettle. Just generally in life.

On a last note, if any of you beady-eyed individuals have noticed that my bed linen isn’t ironed you’d be right. I thought about making it look starched and gorgeous just for the purposes of this piece but decided instead to be truthful. Life’s busy enough as it is and although I said I’d find the time to write no matter what, something's got to give.  And in this instance it’s the ironing. These books won’t write themselves you know!

If You’re Not the One by Jemma Forte is out now.