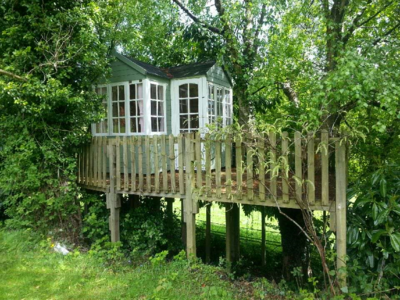 So many people ask me about my treehouse – my summer office; it’s the second most frequent question I’m asked, after ‘how much are your characters based on real people?’ But I completely understand the fascination people have with it. In fact, having a treehouse was one of the very specific dreams I had for the type of outdoorsy, Famous Five-lifestyle I wanted for my children and a driving force in making the big move out of London. I certainly didn’t envisage however, that I would one day be the main occupant down there, tapping away on a laptop sipping cups of lukewarm tea.

It’s at the bottom of the garden and overlooks a field where our neighbours graze their horses. It has been built around the canopy branches of two silver birches, with a ramp up to a drawbridge and ‘viewing platform’ (my middle boy was very into pirates when we built it) and it then drops down at the back onto a rope bridge. The house itself is situated on a second platform and I’ve interwoven a wisteria through the balcony to create a garden bower. The whole thing is deliberately rustic and naïve and supposed to look like my husband made it! 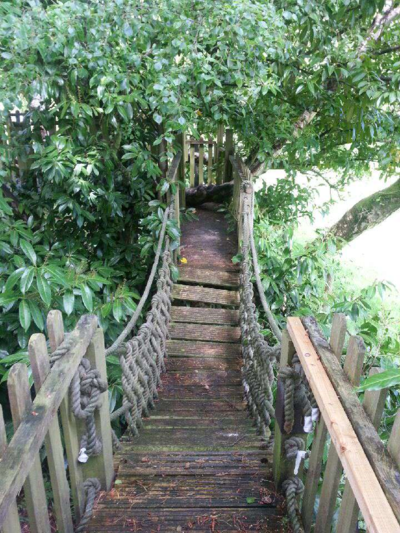 For the first few years after it was built, it was very much the children’s: the floor was permanently covered in miles of Brio train track and there were crates of Lego everywhere. I put an old reclaimed school desk and chair in the corner for my children to do their art and until very recently, there was a wooden shop with pretend tins of beans and plastic peppers and drawers of funny money! Pink and yellow tissue pompoms still hang from the ceiling after my daughter’s birthday party down there a few years ago and I made the striped seersucker curtains myself with some spare fabric that I had lying around. We spent so much time playing down there – I particularly remember my daughter as a toddler making me take her down there one winter; she never felt the cold and was playing with the toys in her duffle coat whilst I blew on my fingers and googled ‘frostbite.’ 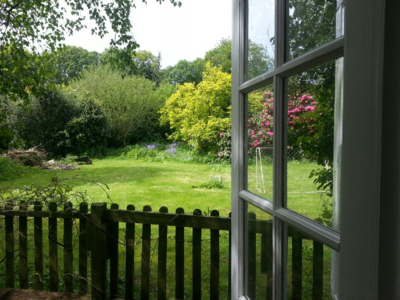 It took a while though for me to migrate down there to work. I first went down one sunny day when I had to work and just couldn’t bear to be stuck indoors, looking on at the glorious weather. I don’t mind the solitary aspect of being a writer at all, but sometimes it is very difficult to be permanently indoors. Anyone who works on a laptop will tell you it’s impossible to work outside in the sun as you can’t see the screen, but the shade of the leaves down there means the light is dappled and soft, so I can be outside without guilt. I’ve steadily developed an efficiency system as I’ve gone along as our garden is rather large and I can’t be making numerous trips up and down the lawns to fetch tea or a notebook: I keep some giant garden pillows down there for lounging  on the deck when I’m editing and I’ve worked out how to prop my coffee cup on one of the uprights of the second platform as it’s quite impossible to cross a rope-bridge carrying a hot drink!

The dogs make a bit of a fuss when I go over as their paws are too small for the rope bridge. They do cry a little as they gaze up at me mournfully from their spot on the lawns, but it’s so blissful lying in the leaves, the only thing that will make me cut short my session is the school run. Of course, now my children are older, they think the treehouse should be ‘refitted’ with gaming chairs in there and a plasma screen, but it’s never going to happen. They might be growing up fast, but I’m not!

The Summer Without You by Karen Swan is out now.