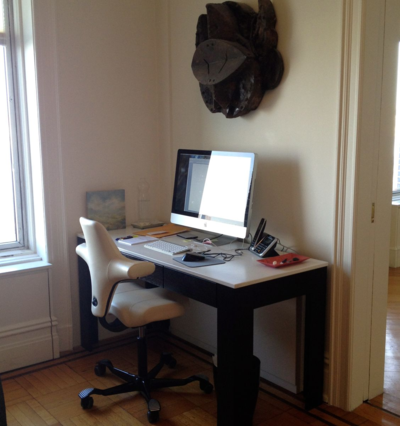 As a grade school student, I was always being sent to stand in the corner for talking in class. (Do teachers even do that any more? It’s probably politically incorrect now.) I must have taken a liking to all those corners over the years because now I write in a corner.

When we (the we being my husband Randy and me) first moved into our apartment, I set up my computer in a small back room off the kitchen. Our building is over a hundred years old so I’m sure the room was originally intended for a nanny or a scullery maid or for naughty children to stand in corners. Something Dickensian. But I turned it into the room alternately called The Computer Room or My Office.

I hate to tell you how long it was before I realized this was a Foolish Idea. Most of the rooms in the apartment overlook the Hudson River. They are bright rooms, cheery rooms, scenic. And there I was in my dark hovel.

I decided to set up shop in a corner of the room alternately called The TV Room or The Den. (Kindly note my commitment problems with giving rooms only one name.) This required finding a desk to fit the space and a certain amount of discipline. After all, there was a television in the room. It’s bad enough that I click on Facebook the way other writers may light up four packs of cigarettes a day, but now I had to make sure I didn’t find myself saying things like: “Oh – five minutes to check out a few episodes of Downton Abbey…how can it hurt?” And when there’s nothing good to watch on television, there’s always that big window with the view of boats and dogs and policemen giving out traffic tickets.

But so far so good.

I designed a desk (with secret drawers!*) that was built by a friend, and added a fake wall behind it on the bottom to hide all the computer cords and wires. In one corner (here we go with those corners again), I keep a big water bottle. I don’t necessarily drink from it, but at least I remember that I should drink more water.

In the other corner is a small tray given to me by my agent, made out of those swirly handmade Italian papers. And in it are my lucky charms…a bird feather Randy brought home from Central Park one day; a tiny seashell a friend gave me at my book reading. (Between us, I still don’t know why Randy brought me a bird feather or why my friend Joseph brought a seashell to my Barnes and Noble reading, but I have deemed them both talismans, so talismans they are.)

In the middle of my desk, of course, is my big honking computer screen. Really. It’s ridiculously big. But I am the queen of keeping ten windows open at once…many of them Facebook windows or email windows…and hey, I guess they’re healthier than cigarettes.

On my left is a lovely painting of a sky done by my friend Steve. I first saw the painting hanging in his office one day; when I complimented it, he gave it to me as a gift. If I’d known, I’d have complimented his car. But I love the painting. It looks like heaven and serves as a reminder to keep writing because life is short and someday I’ll be dead.

Okay. That was depressing. Where were we?

Above my desk is one last strange talisman. It’s this THING. Sort of like a Medieval coat-of-armor shield. Sort of like an African mask. I have no idea what it is – but it came with the marriage. Randy owned it pre-Linda. He likes it and it was hanging on the wall before my desk wormed its way beneath it, so the mask-shield-something-or-other is still there. And shall probably remain there long after I’ve floated off into Steve’s painting and Randy is married to his new wife. Who will immediately redecorate and get rid of my desk.

*I never use the secret drawers. But I like knowing they’re there.

What Nora Knew by Linda Yellin is out now.