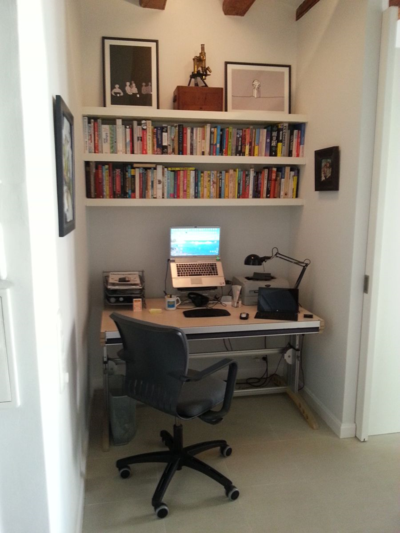 While I can (and do) write anywhere – cafés, trains, park benches, and aeroplanes (where I’m generally the most productive given the lack of internet access), the only place where I have an actual writing room (well, study, though as you’ll see from the photo, it’s actually more of an open cupboard) is in my flat in Barcelona. I spend part of the year here (the city was the inspiration for my short story in Sunlounger 2), and in between running along the nearby beach, the occasional game of tennis, or enjoying Barcelona’s fabulous weather/architecture/shopping/bars and restaurants, this is where my real work gets done (and by real work, I include time spent on Twitter and Facebook etc. It’s marketing, right?).

I’ve had the desk for years – it converts into a bed (it’s actually called a ‘Besk’ – see what they did there?) – not for me to take inter-edit naps, you understand, but for the occasional visitor. The book collection (apart from the display of my various novels and foreign editions) includes a number of reference volumes (e.g. How To Write The Romantic Comedy and The Seven Basic Plots – which, seeing as I’m about to publish my eighth novel, means I must have repeated myself), along with a few novels that I never tire of reading (Nick Hornby’s High Fidelity being the one I constantly dip in and out of to remind myself what good writing in my genre should look like).

The microscope on the top shelf was my grandfather’s. He was a surgeon in India, and he died before I was born, so I’m grateful to have something of his, plus it’s useful for reading the amounts on my royalty cheques.

The glass ‘thing’ to the right of my laptop – which is a very handy paperweight – is my nomination for the Melissa Nathan Award for Comedy Romance, which I’m extremely proud of. My second novel, The Ex-Boyfriend’s Handbook, was shortlisted for both this and the Romantic Novel of the Year award in the same year, and though it didn’t win either, it was an honour just to be nominated/everyone’s a winner blah blah blah. (gnashes teeth).

The painting on the right-side wall is of someone reading The Ex-Boyfriend’s Handbook on a train. I had an email from the (American) artist, telling me she’d been on a painting holiday in the UK when she’d seen this girl reading a book that was making her laugh, so she’d painted her and it, then tracked me down on the internet to let me know. Of course, she might have faked this with hundreds of different books then contacted their respective authors to try and make a fast buck, but seeing as I’ve never actually spotted anyone reading one of my books in public (and probably won’t, seeing as they’re mostly ebooks now), I bought it anyway.

My laptop’s a widescreen Sony, big enough to have two Word documents side by side when I’m editing, which is extremely useful. When I’m not at my desk, I write on a Microsoft Surface (on the right of the desk). Even though I’m the only person in the world who bought one, I love it – it’s lighter than a netbook, small enough to be carried everywhere, and has a great screen and a pretty decent keyboard for the size.

Oh yes, I forgot to mention, I also keep remembering how lucky I am to do this for a living. Even though writing’s still a 9-to-5 job, it’s the best job* in the world.

*Except for Ferrari test driver. Or Halle Berry’s masseur.

Matt Dunn’s new novel, What Might Have Been, is out on August 12. You can also find a brand new short story from Matt in the Sunlounger 2 anthology.