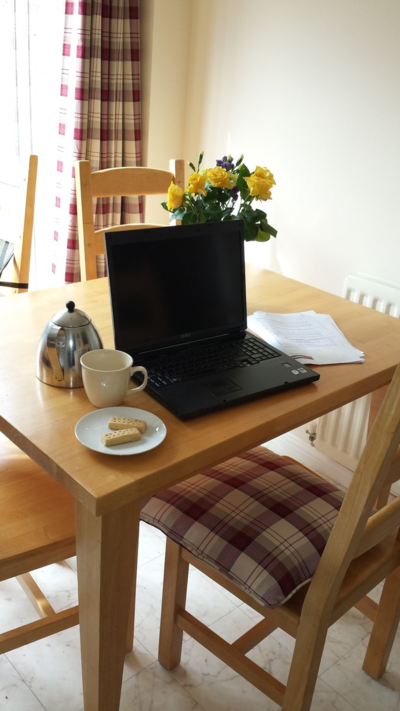 My kitchen table overlooking the garden. I had to change my direction after the window cleaner nearly ended my life by appearing at the patio door one Saturday morning. All I could see was a reflection of a bearded man in my laptop screen, staring at me holding his chamois leather. Oh how I laughed.

I had every other weekend to myself so I was really strict with myself. I would religiously write from 10.00am – 4.00pm, with the occasional ‘pit stop’. To my left was a pile of notes and on the right was a pot of tea and some low fat, low carb, five calorie each, chocolate chip and toffee, biscuits. Near to Christmas, it would be my mum’s home made mince pies.

I don’t have a big house and writing options are limited. However, sitting at my kitchen table looking out into the garden (of course having changed position after ‘chamois gate’) seemed to clear my head. I live in a quiet area and in the summer the patio doors were open and all I could hear were the birds singing their hearts out; probably with excitement at the meal I’d put out for them to devour. Being near nature allowed me to empty my head of day-to-day nonsense and enter the world of my character, Sarah Chilton.

Music played an enormous part of my writing. When you read the book, you’ll remember how Sarah loves Classic FM TV. I do, too, such a coincidence. Several songs on there resonated with me and I added them to my itunes playlist. When I needed to write poignant bits in the book – Sarah’s depression, moving house and generally picking herself up – I would, without fail, play Andrea Bocelli and Elton John and Pavarotti Live Like Horses. They would be on a loop and this enabled me to really engross myself in my character and be part of her life.

I don’t think I’m alone here when I say that I could only write in this spot. I tried to write in the evenings but it just didn’t feel right. My brain felt cluttered and I couldn’t concentrate. Weirdly, too, sitting down in the same spot to collate ideas for the sequel hasn’t worked out. I need to find a new space for book two and it’s not going to be with my back to the patio door, of that I am most definitely certain.

Being Sarah Chilton by Ruth Briddon is out now.