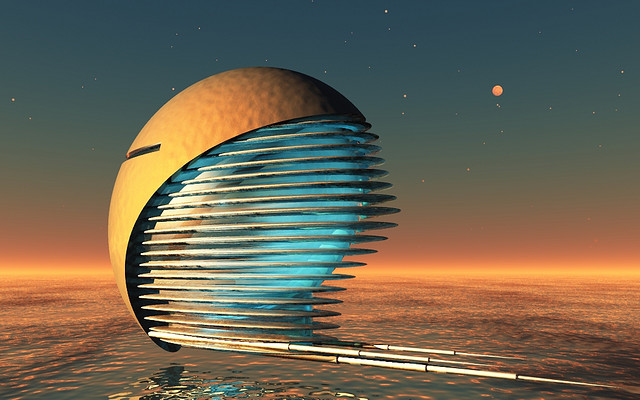 The science fiction genre, along with fantasy, can easily be considered to be more demanding, in terms of world building, than other genres. Science fiction demands that everything in your story is scientifically based, if not confirmed, especially if you’re writing a story about teleportation, or space travel. Compared to fantasy, in which the world building depends completely on your creativity and how you choose to explain the magical aspects of the world, in science fiction everything needs an explanation that will make complete rational sense. This is why you need to keep some things in mind when you’re writing a science fiction story. Below are five such things.

The readers of science fiction will be ready to accept the impossible, as long as it’s properly explained, and if that explanation makes sense. This means that the world your story takes place in needs to be authentic –original in every sense of the word. Of course, you don’t need to avoid writing about portals or, for example, teleportation simply because someone else has told a story about it before. The readers would want to know, in this example, how a person could teleport; what are the mechanics behind it; and how this technology would be used. And this is where you come in as the writer to offer a new perspective on something that is already familiar.

Science fiction deals in parts of our world that, while familiar, are taken to a level that is unfamiliar to the readers of the present day. This is why world building plays such an important role in science fiction – the setting becomes part of the plot, the action and the everyday lives of the characters. An action packed chase scene is always fun, but when it happens in a world that is so unlike our own, it becomes ecstatic. It increases the escape from everyday life and transports the reader into a world that is totally unrecognizable, and therefore, more exciting.

The world that you are building has to be plausible. You cannot take shortcuts and introduce futuristic technology, which would appear magical to the average reader of today, without giving a plausible scientific explanation of how that technology works. This means that you have to do a lot of research into the technology you would like to use. Also, if you’re writing about a futuristic world, you need to create a timeline of events that will describe how that world came to be, starting from the present day and age. Alternatively, the timeline of events that shaped your world could begin from a certain point in the future, if you’re writing a story that is set in a period that is further than 100 years from today.

4. The Laws of Science

Laws and rules can be broken, but it’s not preferable to do so in science fiction. If you’re going to break a rule, then there must be a scientific discovery to back it, therefore making it into a new scientific law that works specifically in your world. However, even that needs a basis that is scientifically plausible, which means you cannot get too unrealistic. So stick to the laws of science, of physics and chemistry, and ensure that whatever you create, while cannot be completely proven by today’s cutting edge science, then it can, at least, be explained in theory.

One of the best ways to show, instead of tell, in science fiction, is the character’s attitude towards their world. Usually, to the reader, everything would be unfamiliar, strange, new and exciting. But to your characters, this doesn’t necessarily have to be that way. For example, if teleportation has been around for more than 30 years in your world, then your protagonist and the other characters would be familiarized with it and will not be goggle eyed at it. The characters’ attitudes towards your world is a great way to describe what’s normal, and what’s new, especially if what’s new is part of the greater plot of your story.

Image credit: L.E. Spry on flickr and reproduced under Creative Commons 2.0[author] [author_image timthumb=’on’]https://writingtipsoasis.com/wp-content/uploads/2014/12/photo.jpg[/author_image] [author_info]Georgina Roy wants to live in a world filled with magic.
As an art student, she’s moonlighting as a writer and is content to fill notebooks and sketchbooks with magical creatures and amazing new worlds. When she is not at school, or scribbling away in a notebook, you can usually find her curled up, reading a good urban fantasy novel, or writing on her laptop, trying to create her own.
[/author_info] [/author]