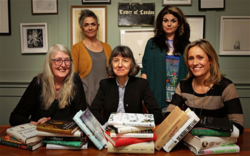 The Baileys Women’s Prize for Fiction, the UK’s only annual book award for fiction written by a woman, has announced its longlist today featuring an exciting sweep of genres and styles and both debut and established authors. With 20 novels included, the list really represents the diversity and talent of women writers and, above all, demonstrates that women’s fiction is thriving (but we already knew that, right?).

The judges must now whittle these 20 books to six, before choosing an overall winner to be announced on Wednesday 4 June 2014. We certainly don’t envy them that task.

Suzanne Berne – The Dogs of Littlefield

Fatima Bhutto – The Shadow of the Crescent Moon

Deborah Kay Davies – Reasons She Goes to the Woods

Elizabeth Gilbert – The Signature of All Things

Eimear McBride – A Girl Is A Half-Formed Thing

Evie Wyld – All The Birds, Singing

Huge congratulations to all of these brilliant authors. What do you think of the list? How many titles have you read? Do you have any predictions?