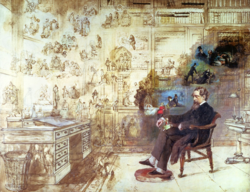 How much is your writing desk worth? Is it a sleek and simple flat-pack number purchased from IKEA for £40? Or a well-loved antique find perhaps, uncovered in a market for a tidy (but reasonable) sum?

Chances are it didn’t cost £780,000 – the price tag attached to Charles Dickens’ desk, which was secured for the nation by The Charles Dickens Museum in London this weekend.

The desk and chair were used by Charles Dickens when he wrote Great Expectations and his final unfinished novel, The Mystery of Edwin Drood, in his last home, Gad’s Hill Place in Kent.

They had been passed down through the Dickens family after the author’s death in 1870, but were auctioned for the Great Ormond Street Charitable Trust in 2004. Since then, they have been in private ownership and could have been sold at any time were it not for the £780,000 grant made available to the museum by the National Heritage Memorial Fund.

Carole Souter, chief executive of the NHMF, said: "Charles Dickens is one of the UK's celebrated literary figures, whose stories and characters mean he is as popular today as he was in his lifetime. It's exciting news that visitors to his London home can continue to enjoy the unique opportunity to see the very desk at which some of his most famous works were created."

So, be careful where you put that hot mug of tea from now on. You never know how much your trusty old writing desk could be worth years from now …