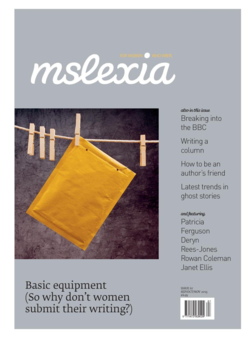 Thousands of manuscripts remain unsent because women writers are too fearful, or too busy, to submit them, according to a new study.

The new quarterly issue of Mslexia, the magazine for women who write, features the full study findings on why women, who read and write more than men, do not submit their work to be published.

The poll of 2,254 women writers exposes a problem Debbie Taylor, editor of Mslexia, calls ‘the submission iceberg’. Whilst most women don’t finish their manuscripts, with only 34% of the writers surveyed completing a full first draft of over 80% of their writing, others are only submitting a tiny proportion of what they actually write: one in three submit less than a fifth of their finished work.

So why write all of these manuscripts and then tuck them out of sight?

The most common reasons include constant tweaking (17%) and women thinking their work just isn’t good enough (39%). Some women even suggest it is too much of an admin hassle to spend precious time preparing for submission and applying. In addition, many of the women surveyed found it hard to bounce back after rejection – and some say that their reluctance to submit is a subconscious move to avoid the possibility of being turned down.

What do you think of these findings? Have you put off finishing a manuscript by tweaking or thinking it’s not good enough? Has fear prevented you from submitting completed work?

The Autumn issue of Mslexia, the magazine for women who write, is on sale now.