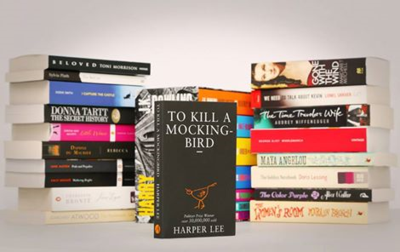 To Kill a Mockingbird by Harper Lee, about a childhood in a sleepy Southern town and the crisis of conscience that rocked it, has topped a list of the most influential books by women.

The selection of 20 titles – chosen by the public – was unveiled today and culminates the Baileys Women’s Prize for Fiction’s new #ThisBook campaign, which has been inspiring book lovers to share their favourite, life-changing books by women using the hashtag on Twitter.

Kate Mosse, co-founder and chair of the Women’s Prize for Fiction Board said the project was “a wonderful way to encourage readers to share their #ThisBook stories via social media” and “an exciting opportunity to identify the books that people are actually reading, talking about and recommending to other people right now”.

Of To Kill a Mockingbird, Liberty director Shami Chakrabarti, who has also been announced as chair of the judging panel for next year's Baileys prize, said: "With human rights under attack the world over, the enduring appeal of Harper Lee's great tale gives hope that justice and equality might yet triumph over prejudice."

The top 20 most influential books by women, as voted for by the public:

1) To Kill a Mockingbird – Harper Lee

10) I Capture the Castle – Dodie Smith

13) Gone With the Wind – Margaret Mitchell

14) We Need To Talk About Kevin – Lionel Shriver

17) I Know Why the Caged Bird Sings – Maya Angelou

What do you think of the list? Are there any other books you would have liked to see included?