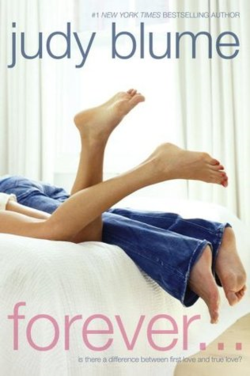 When Katherine met Michael she was not expecting to fall in love, but that’s what happened. It is not long before they feel they know each other inside out, but Katherine is in no rush to take their relationship to the next level. However, when the opportunity arises it feels right. They are both in this forever, but then forever is such a long time.

As soon as the #NostalgicSummerReread was mentioned I knew which book I wanted to re-read: Forever by Judy Blume. Between the ages of 10 to my early teens I devoured all of Judy Blume’s books and, although this was not my favourite, whenever I saw it on the school library shelf I would check it out. Once upon a time, it was the much talked about book amongst teenage girls – it became legendary – and even though I was reading a good 20 years after it was released, it was still current and didn’t seem dated. Nowadays though it is more than likely no big deal for teenage girls to read Forever, as everything is so much more sexualised than it was when I was that age in the 90s. All these years later I can still see the ambiguous cover in my head, which was an illustration of a teenage boy and girl with a blue sky and rainbow above them. Now the cover that appears on my Kindle is very obvious of boy and girl’s legs entwined on a bed! How times have changed!

This time around I found Michael to be overbearing and Katherine to be empowered and wise beyond her years. Whereas when I was a teenager I was intrigued by the details of a long-term relationship rather than the people involved in it.

I thought I would remember the storyline from my many re-reads in the past, but I didn’t other than the characters and the sheepskin rug scene. I certainly didn’t remember the shocking subplot of Michael’s best friend, but maybe at the time I was too focused on the ‘rude’ sections. Reading it now I see how important it is that teenagers read this book as it deals with serious issues, which are still relevant today. The sexual relationship really isn’t the main focus of the book.

My verdict after reading Forever all these years later? Judy Blume’s queen status amongst teen girls remains firmly in place as she has managed to write novels that truly stand the test of time.