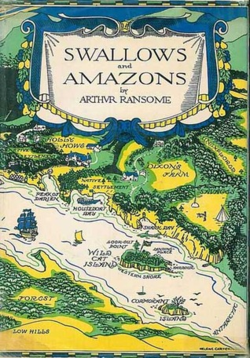 I know exactly where I was when I first encountered Swallows and Amazons. I was sitting on the carpet of Mrs. Brooks’s class waiting to find out what she was going to read to us next – we’d finished The Kingdom of Carbonel the previous week.

I was hooked by Arthur Ransome’s tales of a special school holiday in the Lake District from the start. When we’d finished the book (in time to watch the film for the end of term), I borrowed Swallowdale from the library and worked my way through some of the rest of the series. I even read a passage from Swallows and Amazons for a speech exam as part of my elocution lessons when I was about 14 (part of my mother’s attempt to stop me talking at warp speed and with a Northamptonshire accent). So it seemed logical for me to re-read the original (and best?) for Novelicious’s Nostalgic Summer Reread.

I was worried that 20-something years on, it would seem old fashioned. And perhaps to today’s children it would because they’re used to smartphones and tablets, but Ransome’s story of a camping holiday in the 1930s still worked brilliantly for me. I still don’t understand all the sailing terminology, but it doesn’t matter. And yes, some of the language is old fashioned (natives anyone?) and one of the characters is called Titty (which I believe is being changed for the upcoming TV adaptation!) and they eat food that most modern children (and adults like me!) wouldn’t touch with a barge-pole.

But I got swept away in the story of four children having the sort of holiday that every child dreams of – without any adults and with some pirates and bad guys to fight. It almost made me want to learn to sail!