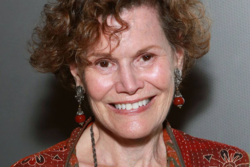 Judy Blume, champion author of young adult fiction such as Forever, Are You There God? It's Me, Margaret and Blubber, is set to release her first adult book since Summer Sisters was published in 1998. We touched on this story briefly on Friday, but couldn’t resist sharing a little more information with you after some weekend sleuthing. If a new Judy Blume book isn’t something to celebrate, we don’t know what is.

While there haven’t been many details released to the public just yet, we do know the novel will be published in 2015 and will be edited by Carole Baron, who also edited Summer Sisters.

“Carole and Judy have a long history together, and have been discussing this project for the last four years,” Knopf VP Director of Publicity Nicholas Latimer said. “When our head of house announced this acquisition at our editorial meeting last Thursday, everyone in the room broke out into applause. All as a way of saying, many Judy fans here!”

Carole Baron wouldn’t reveal much about the new book, but she told John Williams of the New York Times: “It’s pure Judy Blume, writing about family and about friendships, about love, about betrayal … It’s quintessential Judy.”