Anouska Knight won ITV Lorraine’s Racy Reads competition in February 2013 with her debut novel Since You’ve Been Gone. Her latest novel Letting You Go asks, what if a tragedy occurred and you only had yourself to blame, how do you move on from the past? Today, Anouska chats to Debs about her writing and winning the Racy Reads competition on ITV's Lorraine. 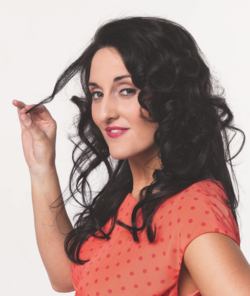 I am more of a night owl, in fairness. Which is a very good thing because daytime working just isn’t that practical with a one-year-old getting up to no good all day and two 45min school runs.

I’ve admitted defeat and hang out with my baby son Jesse during the day, lots of food-throwing, clumsy slobbery kissing, various attempts to lull/persuade/vibrate him off to sleep so I can at least sneak a look at emails etc. But it’s a bit of a no-goer really.

I tend to hit the laptop at around 8pm once the kids are settled and I’ve securely shut them all the other side of my bedroom door. I’ll do four or five solid hours on my manuscript then, well, to begin with at least. As the deadlines start to get more ferocious, the hours escalate really quickly. It’s not unusual for me to still be writing at stupid o’clock, but then show me an author who doesn’t. Any writer who doesn’t graft through the night isn’t hard-core like the rest of us!

I used to do this quite a lot, for a character’s physical features in particular. I found it helped to have a visual point of reference and pictures of famous people are readily available. As for personality traits, or mannerisms, or inspiration for a plot line, all anyone needs do is pay attention to the people around them, or on newspaper articles, or the people chatting behind them in the bank or restaurant or supermarket. I like watching the way people, famous or otherwise, interact with each other. They’re rich pickings.

I think favourite of all time is a tricky one, because depending on the age I am, the mood I’m in, all that stuff, I’ll get something different out of what I’m reading. One title that did strike quite a profound chord was My Sister’s Keeper by Jodi Picoult. I read this book shortly after my younger sister was diagnosed with Ewing’s Sarcoma at 19. At the time of her diagnosis, I had a 2 year old son and a new 4 month old baby. Suddenly, life became very fragile.

As a sister, I’d have done anything to help Mena through her illness. As a mother, I realised the hell my own mum was in, watching her child suffer. Seeing my own little boys, I found it very hard to comprehend the thought of any siblings having the lives of Kate and Anna Fitzgerald.

Now, after nearly a decade all clear, my sister’s cancer has recently returned, so as a family we’re all revisiting many of the issues raised in this particular book. 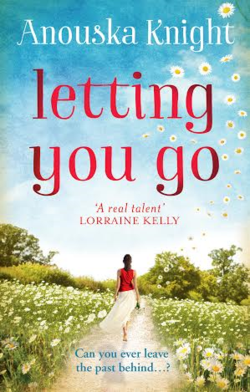 My first book Since You’ve Been Gone was a dive straight in situation. I won the book deal live on ITV’s Lorraine and only had a few months before its publication, so that was a bit of a nail-biter.

Now that I have my third book, Letting You Go, under my belt, I’m a bit more relaxed about it all. I wait until I’ve got the initial spark, the big problem facing my main character, to take shape in my head, then I start working outwards from that.

I’ll write a detailed character profile on each of the key players – what makes them tick, their hopes and fears etc, then I do the same for secondary characters. I try to have a definite sense of where each character should end up on their own journey through the novel, but I think story writing needs to be fluid to some degree, otherwise there’s a danger of heading off unforeseen possibilities to develop serendipitous subplots or characters.

Oh, and I should mention the pacing-panicking-pacing phase of my writing process. This is where I inevitably discover that despite my colour-coded Post-It notes and ergonomic pens, I’ve reached the last remaining third of my word count and still have half a story to tell.

You mean you didn’t see it on the telly?

To cut a very fantastic story short, I entered the Racy Reads competition on ITV’s Lorraine back in January 2013 for the chance to win a publishing deal with Mills & Boon and trip to LA.

By February, Lorraine Kelly had declared me the winner, by March I’d jetted off to Beverly Hills for a lunch date with the delightful Jackie Collins and by April I’d somehow submitted 97k words to my editor.

May saw the book going through the motions of copy-editing, proof reading etc, June saw me starting on the synopsis for book number two after my gorgeous editor offered me not one, but two more book deals before Since You’ve Been Gone had gone to print.

Then finally, on July 16th  2013, Since You’ve Been Gone was released. Three books in, it’s been a pretty interesting two years!

Hopefully, that a novelist needs to be a literary genius with an endless vocabulary and a brain the size of a water-melon. Don’t get me wrong, it probably helps, but I think overall, heart goes a long way. If you’ve got heart, your words will have heart too.

Another myth would be that being a novelist is an unattainable goal. I certainly thought of it that way. Turns out, I was wrongo.

Do it. Pick up your pen or fire up your pc and get to it.

When I started tinkering at piano (I can’t play for toffee, but the point still stands) my Pa told me how Jools Holland had once advised would-be tinkerers to ‘Play what you like, and like what you play!’ I think that’s sound advice for writing too.

Don’t get bogged down in the motions. You have to feel what you’re writing, so write what you feel, channel it into your work. Not everyone will like what you put out there, so – straight off – you might as well forget trying to please everyone. Write something that you’re passionate about, because it’s your novel at the end of the day.

I’m just bashing out the synopsis of my fourth book to run through with my agent and editor, which is pretty bonkers really. I’ve been extremely lucky and beyond thrilled that two years after winning the initial book deal, I’ve just accepted an offer from the mighty Harlequin/Harper Collins for books four and five!

I have to say I’m very excited about the plotline for book four, I think it’s going to be a little darker than my previous books so I’m really looking forward to getting my teeth into it.