Antonia Hodgson, author of The Devil in the Marshalsea and Editor-in-Chief for Little Brown, has answered a few questions for us about her debut novel – to be reviewed here soon – and her writing process. 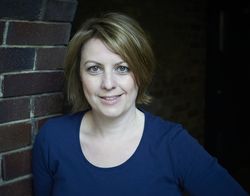 I have a full-time job so I have to plan my time carefully, using all my weekends and holidays. Once I’m deep into the novel (as opposed to researching/reading/plotting) I’ll sometimes write for an hour before work too. It helps me to stay connected in between longer writing periods – and sometimes that one hour can be remarkably rewarding. Finding time in the day is a bit like finding space in a packed suitcase – you can fit more in than you think if you roll everything up right. But ideally I like a good long stretch of time to write.

On a full writing day, I’ll begin at about 10am and work through until the evening, apart from an hour’s break for lunch. Sometimes I’ll take a notebook and write in a cafe – I like to change the routine from time to time. I can write in silence, or with people chattering all around me – as long as things are going well. When I’m stuck then of course it’s everybody else’s fault for being so loud and distracting – and how dare they talk to one another in a public place, damn it?

I tend not to write in the evenings. It’s important to take a break and spend some really good, quality time with the TV.

Not consciously, but I can’t help but draw from my own life and experiences. My first novel, The Devil in the Marshalsea, is set in London in the 1720s. So that’s almost 300 years ago, but people haven’t changed, not fundamentally. Falling in love feels the same. A friend’s betrayal feels the same. A hangover feels the same.

If we’re talking about the modern genre, Bridget Jones’s Diary. I moved down to London in 1994 and got a job in publishing earning nothing. I was sharing a flat with three friends in Finsbury Park and we used to wonder why there were no novels about people like us. Twentysomething, single, working, struggling with money, building our ‘family’ from our friends. A few months later my flatmate faxed (yes, faxed) one of the early Independent columns over to me with big exclamation marks all over it. It was completely fresh and had brilliant jokes. Perfect.

And if I’m allowed to reach further back in time… anything by Jane Austen. Obviously. She’s queen.

What is your writing process? Do you plan first or dive in? How many drafts to you do?

For The Devil in the Marshalsea (and its sequel, which I’m writing at the moment), I began with a lot of research. I’d sit in the British Library, marvelling over some fascinating detail. For example, I found a pamphlet written in 1728 by a man sentenced to hang. It included an open letter to his first love, in which he says:

I confess you have made a better choice in your late Match, than you could have expected in me; therefore from my Heart, I wish you all the Content and Happiness, this frail and transitory world can afford.

Heart-breaking! And then I found myself wondering about these two people and what happened to them. I didn’t write about it directly, but those moments when you connect with someone’s story, almost 300 years in the future, are very powerful. Sometimes they will spark an immediate idea, but more often they will just sink into my subconscious for later use.

Before I begin writing I prepare detailed notes on characters and plot. It gives me a framework. However, things can change quite a bit once I start writing. Something I thought was completely vital fades away. Something I dropped in casually one morning suddenly takes on greater significance. It’s my favourite part of the process. There’s something really enjoyable about putting in all that scrupulous research and preparation then letting your intuition and imagination stomp all over it.

I spent about four years writing a novel that just didn’t work, for various reasons. For starters, it was 240,000 words – and not in a good, Game of Thrones way. I learned a lot from writing it, though. It’s a cliche, I know – but writing is never wasted – you can learn from every mistake.

I showed it to an agent, but even as I sent it to him I had a strong feeling it wouldn’t work out. However, it was an important moment for me. Until then I had written pretty much in secret, so ‘outing’ myself was a big leap. The fact it didn’t get published or even agented wasn’t nearly as important as the fact I’d found the courage to show it to someone.

My next novel was The Devil in the Marshalsea. It is half as long and can be held in one hand without causing significant wrist damage.

The same as all other dreams that come true – that it will somehow magically solve all the other problems in your life.

To paraphrase Yoda (and small green muppets give the best advice): Write or write not. There is no ‘want’. *makeswisebutgrumpynoiseandhobblesawayonstaff*

My second novel, a sequel to The Devil in the Marshalsea. I’ve nearly finished the first draft. It’s written from the perspective of my main character, Tom Hawkins, but this time I’ve given more space to his partner, Kitty Sparks. I’ve enjoyed developing her story. She kicks ass like a mofo, as they often said in the early eighteenth century.