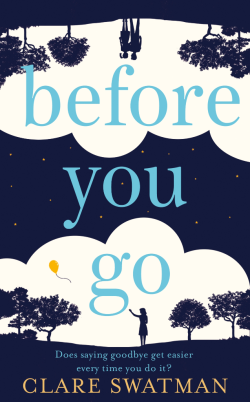 Clare Swatman is a writer and journalist and her debut novel, Before You Go, is published today by Pan Macmillan. She's popped by today to answer a few questions for our Novelicious readers. Over to you, Clare…

Please tell us about your latest book.

Before You Go is, essentially, a love story, but it has a twist. The book starts after Ed has died, and his widow Zoe is grieving for him. Things hadn’t been good between them before he died and she wishes with all her heart that she could change things, go back and tell him that she loves him, hold him in her arms one last time. She then has an accident and falls into a coma. When she wakes, she unexpectedly finds herself as her 18 year old self, and realises she’s reliving her first day at university, which is the first day she and Ed met. As the days pass she relives lots of the most important days of their relationship, and she starts to realise she’s not only been given the chance to see him again and say goodbye, but that she might actually be able to change the outcome, and maybe even stop him dying . . .

From every day lives. I spent many years writing true life stories for magazines, and sometimes people’s real stories can be more fascinating and heartbreaking than anything you could make up. I loved listening to people pouring their hearts out, describing how things made them feel because it’s not always how you expect them to feel. Stories about real people and real lives are what interest me, and the idea for Before You Go came, very vaguely, from a story I once read about a lady who hit her head and when she woke up she thought she was still 17. She didn’t know who her children or husband were or who the woman in the mirror was. It fascinated me, the thought of how that must feel and I wanted to explore it. What Before You Go ended up being was actually very different from this in the end, but it was the spark of inspiration for me.

With two young children there’s not really any such thing as an average writing day! But I do try and be quite structured, otherwise I easily run out of time. I drop the kids off at school and then head to my desk where I’ll make sure I have tea, snacks and a hot water bottle or heater to hand, and then I’ll check emails and facebook and twitter before getting started, in the hope they won’t distract me after that (it doesn’t always work!). And depending on what stage I’m at in the writing process, I’ll either start by rereading what I wrote the previous day so I can try and carry on in the same way, or I’ll start making notes about characters, or researching something on the internet. If I’m writing a first draft I try and write an absolute minimum of 1000 words a day, which some days is so easy, and others is a real struggle. But there’s nothing more satisfying than seeing the word count going up! I always end the day by emailing the latest version to myself in case the computer blows up. I’m paranoid about losing everything!

What book means the most to you?

It’s hard to say. Margaret Atwood’s The Handmaid’s Tale was a book we studied for English A Level and I loved it. I’ve also always loved Jane Austen and although I haven’t re-read any for a while, she’s always there waiting for me if I ever run out of new books to read!

I’ve loved Margaret Atwood since I was at school and we read The Handmaid’s Tale. I really love her simple, pared-down style of writing, which expresses everything it needs to so brilliantly without the need to try and use loads of big, complicated words. For me, that’s the best, and hardest kind of writing to do. I also absolutely LOVE Maggie O’Farrell. She’s never written anything I haven’t loved. Her sense of pace and characterisation and plot makes me long to be better all the time.

What are the best bits, worst bits and most surprising bits of being an author?

The best bits so far are realising that people you don’t know are paying for, reading and actually enjoying this book you’ve spent so long writing, reading and re-reading that you’ve absolutely no idea whether it’s actually any good any more! I also love the actual writing process as I love seeing what the characters get up to as the plot develops. I think the worst bits will still be to come, which will be the people who hate the book. I know you can’t please everyone, but it will still be hard to read. And for me the whole thing has been rather surprising as it’s something I’ve always dreamed of doing but never actually believed would happen. But it has, and it’s amazing.

I plan. I’ve tried just sitting down with a vague, half-formed idea and just writing into the ether to see what happens and for me, nothing happens apart from me writing myself into a corner and giving up! So for Before You Go and my second book which is still in progress, I’ve planned chapter by chapter. There isn’t lots and lots of detail in those plans, but I find it much easier to sit down to start a new chapter knowing where it’s going, and also where the whole story is going. There’s then plenty of freedom within the chapters to go off and tangents and see where your imagination takes you. That’s the fun bit.

Before You Go took a while to write, but then I did some substantional re-writing after finding my agent, and then some more re-writing with my lovely editor Victoria at Pan Macmillan, and then there were several rounds of tweaks, so I suppose there have been three or four main drafts but lots of smaller edits as well. We’ll have to see with book two – I’m on draft three already!

What was your journey to being a published or self-published author?

On New Year’s Eve 2012 I decided that 2013 was going to be the year I wrote my novel, whether it got published or not, because it would be the one thing I’d always regret if I didn’t even try. And so even though I had two young children and hardly any childcare, I put aside every Thursday to write my book. I stuck to it rigorously, and after a year I had a rough draft done. I was thrilled. I then spent some time re-working it in 2014, and then I put it to one side for a bit, thinking it was no good. I picked it up every now and then to have a tinker with, but it wasn’t until early 2015 that I decided I needed some help. So I paid my author friend Katy to read it for me and write an honest appraisal. The result of that involved a few editorial changes, but she really liked it, and it gave me the confidence to send it out to agents. So, in August 2015 (11th August -  remember the date very clearly!) – I sat down and went through the Writers and Artists Yearbook and marked all the agents who represented my type of fiction, and then I went through their websites meticulously to find out exactly what they wanted. And then I sat down and sent it out to 11 or 12 agents in the first instance. I assumed I wouldn’t hear back for ages and tried to put it out of my mind. But to my astonishment, just three days later I had an email from Judith Murray’s assistant at Greene and Heaton asking to see the full manuscript. Judith had been an agent someone had recommended to me and had been at the top of my list (as if I was going to be fussy, but a girl’s got to dream!), so with shaking hands I sent the full thing and then sat down to wait. And press refresh . . . and again . . and again. The wait wasn’t actually very long but it felt like a lifetime, and then, just a few days later, Judith emailed me to ask me to go in to see her. And so, to cut a long story short, I went to see her the next day, spent a good couple of hours talking it through with her, and went away with an amazing agent who’d agreed to represent me, as well as a whole loads of changes to make to my novel. It took me a couple of months, but when I sent the reworked version back to Judith she loved it, and sent it out to publishers the very next day! In the end I had two publishers interested in it, but I went with my heart and went with Pan Macmillan who seemed to absolutely LOVE the book and really understood the characters and everything about it. That first meeting honestly felt like a dream. That was back in October 2015 and now here we are and the book is out, and I still can’t really believe it!

Commit to making time for it. If, like me, you’re terrible in the evenings and just want to slob in front of the TV and relax, then don’t kid yourself you’re going to do it every evening because you’ll set yourself up for failure. Choose a realistic time that you’ll stick to, even if it means paying for extra childcare or turning down other work, or getting up at silly o’clock if that’s what it takes, and just get on with it! I spent too many years saying I wanted to write a novel and not actually doing it, so I know how easy it is to do!

And I know some writers say you must write every day but it’s not realistic for everyone, myself included. And so don’t beat yourself up if you only have a few hours once a week to do it. It’s still time you’ve dedicated to writing, and as long as you don’t spend the time checking facebook, you’ll be fine.

Book two is well underway, so I’m editing that, and I’m starting to think about planning a third book, but it’s still very much in the early stages.

FIND OUT MORE ABOUT BEFORE YOU GO