Haley Hill is the author of It's Got to Be Perfect, which topped the Amazon Kindle Charts in the UK and the US! 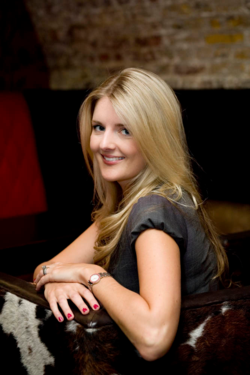 My twin girls started school in September, so now despite missing their cheeky little smiles (and endless demands for snacks, lost toys and Disney-grade entertainment), I’m delighted to actually have an average writing day. Before that, I wrote when I could: when they were at nursery or my mum was babysitting. I’ve heard of many female authors who write after their children have gone to bed and into the early hours of the morning, but after an intensive day of mothering I don’t have the strength of character to forgo a glass of wine and the latest boxset. Besides, I think us women are hard enough on ourselves to achieve it all within a self-imposed timeline and we need to give ourselves a break.

Now I have six hours a day to write, I thought I’d be far more productive, but there’s such a temptation to skive. I keep sneaking off for coffee with the other mums or taking my dog, Rufus, for a two-hour walk. However, I always make it up another day and meet my word count for the week. I used to berate myself for slacking but now I’m older, I’ve started to realise that happiness isn’t something we work towards, instead it’s something we take from the small things each day, like a stroll through the autumn leaves, or snuggling on the sofa watching a movie with my girls.

I think it’s impossible not to. Each character I’ve written about is a mix of people I’ve met, seen on TV or read about in books. However, once a character is formed in my mind, I like to mix it up and remove any clichéd traits, to keep the novel pacey and engaging. When I wrote It’s Got to Be Perfect, I thought it would be fun to introduce two hyper-competent matchmakers who knew all the statistics and psychology of love, with one being a cynic and the other an idealist. The tension between them is, in my mind what makes the story.

Here’s where I’d like to say Wuthering Heights or another Brontë sister classic, but I’d be lying. Although I appreciate the classics, in my down time, I prefer to read commercial fiction, and my favourite has to be Helen Fielding’s Bridget Jones’s Diary. I also love a good tear-jerker like Jojo Moyes’s Me Before You. When I’m reading I’m usually in bed, exhausted, so I want to feel, not think. I enjoy anything that stirs my emotions and makes me laugh or cry, or preferably both.

I wish I had a process. It seems to change with each book. For my first, I must have written about four or five drafts. My girls were much younger then, so I just wrote whenever I had the chance and it was all quite haphazard. When writing my second novel, I was much more organised. They were at nursery, so I had more time to plan. I wrote character profiles and chapter outlines. I’m currently working on my third and fourth at the moment and using an interesting blend of write-what-and-when-I-feel-like and structured. I’ll let you know how it works out…

I can’t remember who said it, but there’s a quote: ‘It takes twenty years to become an overnight success,’ and I think that couldn’t be more true for writers. As I’ve already mentioned, I wrote my first novel four or five times over three years before it was published. I’d submitted various drafts to literary agents and although I was offered representation and a few publishing houses expressed interest, ultimately the consensus was: the novel wasn’t yet good enough. So I kept on editing and re-editing and when I’d finished the fourth draft, I’d decided to test the water first by self-publishing.

Initially it sold well, topping the UK Amazon charts and gleaned some great reviews, but then after a few weeks the sales tailed off and by November I’d stopped promoting it. It wasn’t until one rainy day in January when I checked the sales rank again, that I realised it had climbed to the number one spot on the entire Kindle chart in the US. I was gobsmacked. Soon after I had offers of representation from US agents, one of whom was Emma Parry, of Janklow and Nesbit, New York’s leading literary agency. She represented Helen Fielding in her early days. A few weeks later I was offered a three-book deal by the HarperCollins-Harlequin publishing giant. To say I was delighted is an understatement, but I’m not going to pretend it came easily and effortlessly. It’s a gamble embarking on a writing career. It takes years of hard graft with no guarantees that anyone other than your mum will read what you’ve written.

Hah! This is a great question. Before I started writing, I imagined novelists were amazingly eloquent, glamorous creatures having lunches with agents and attending book signings. Or else in a country pile somewhere, at a polished wood desk, typing on an old-fashioned typewriter. For me, I’m usually stressed out after the school run, in my messy office, wearing skanky old tracksuit bottoms, hating everything I’ve written, and fighting the urge to shop on eBay…

Write. Don’t question what and why, just start writing, find your style and find your story. And don’t be put off if the first few attempts are terrible. That’s just a process we all need to go through. And try not to procrastinate. You don’t need to go on a writing course first, you don’t need to have a home-office with billowing curtains and a knockout view to feel inspired.

I’ve just started writing a novel which has been in mind for a while now. It’s a big step up from what I’m used to, so I’ve had to seriously up my game (no more shopping on eBay). I’m fascinated by female psychology and this novel delves deep into the mind and sexuality of the modern-day woman. It’s quite dark, which I’m loving. I try to be as honest as I can in my writing as I believe that’s what helps the reader to relate. A woman’s sexuality is notoriously warped by the media. What we’re conditioned to want and to strive for, is in many ways against our intrinsic desires. The discrepancy between the two fascinates me.

Haley's book It's Got to Be Perfect is available to buy here.