Today we sit down with author and Heat Magazine’s book review editor Isabelle Broom to chat about her wintery second novel, A Year and a Day, and how she transports her readers to a foreign location with the magic of words.

Hi Isabelle and welcome to Novelicious. Your first book, My Map of You, was based in your favourite place in the world, the Greek island of Zakynthos. Why did you move your setting to Prague for A Year and a Day?

As luck would have it, I’ve always been fond of an adventure, and actually I visited Prague for the first time way back in 1999, before I’d even discovered Zakynthos. I stopped there for five amazing days when I backpacked around Europe, and I never forgot how magical it was. In fact, I loved it so much that I went back again a few years ago, and this time ventured further out of the city and tried to really get under the skin of the place.

When my publisher, Penguin, very kindly offered to publish two of my books a year and suggested that the second should have a winter setting, my mind automatically went to Prague. I had an idea of the characters and their situations in my head already, and Prague just slotted perfectly into place with the plot. It’s such a special place, and now I’ve been able to share it with lots of readers.

The novel has an incredible sense of place. Did you only draw upon memories from Prague, or did you also visit specifically again for research purposes while you were writing?

Thanks to my earlier trips to the city, I was able to start writing the book from memory, but I did go over for four days in January this year to immerse myself in the place again and get further inspiration. I went alone, but I had all my characters alongside me the whole time, so I never felt isolated. Quite the opposite, in fact. Prague is an incredibly friendly place, and I was welcomed with open arms. In those few days, I wrote 20,000 words of the book and collected hundreds of photos and notes – it was invaluable.

What advice can you give to aspiring authors to achieve such a vivid depiction of a location?

I would say don’t just use your eyes – close them and listen to what you can hear, concentrate on what you can smell, and how the air feels on your skin or what the texture of the path feels like under your feet. I like to be as sensory as possible with my writing and descriptions, and I often make recordings when I’m in locations so that I can get back into them when I’m sitting at my writing desk.

Also, I try never to go for the obvious when it comes to description. For example, the sky may be grey, but what kind of grey? Is it pavement grey, pigeon-wing grey, or Russian Blue, like the fur of a cat. There is so much rich description out there for the taking, so just go and have fun with it.

A Year and a Day is made up of three different storylines. Which one came first, and how did you go about intertwining them into one?

When I started the initial brainstorm, it was Megan and Ollie’s story that came to me first, but once I’d set on Prague, Sophie’s story really came to life for me. I knew I wanted to write an older character, too, which was where Hope came from, and I actually – naively, as it turned out – thought it would be straightforward to intertwine the three. *insert manic laughter here*

The next bit is where my brilliant editor came in, and she really helped me to dismantle everything and put it back together in the right way. It was challenging at times, I’m not going to lie, but I’m very proud of the finished novel. You get three stories for the price of one – what could be better than that? 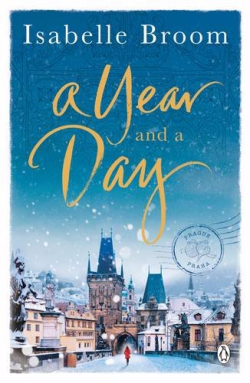 The characters within the three stories are all at very different stages in their lives, was there any one story you found easier to write? And how did you make sure that each of them was completely different, rather than characteristics blending together?

I wouldn’t say one was any easier than the others, but I did really enjoy the scenes when I brought all the characters together, as they always came so alive in my mind. It was as if I was sitting down at the table in the café with them, listening in while they had a natter. There were emotions and motivations in every character that I could identify with, so when I was writing each one, I simply shifted my mind-set – while also bearing the others in mind all the time. I think that’s what helped them become so real.

They were always very different people from the outset, folk that perhaps would never have met had it not been for Prague, so I found it easy to stay true to who they are. I know it’s a cliché to say that all characters are their own people, but they really are. The way I see it, I’m just the person who gets to tell their stories.

With the way the publishing industry works you must already be working on your next novel (perhaps even your next two!), what can you tell us about it?

You thought right! I’m actually in the final edit stages of my third novel, Then. Now. Always., which comes out in April 2017. It’s another summer book, and this time I’ll be introducing readers to the magical and mystical village of Mojacar, on the south-east coast of Spain. It’s somewhere I visited for the first time when I was only 15 or 16, and it’s had a large part of my heart ever since. The book is about family at its heart, but it’s also about overcoming fear, forgiveness, friendship and of course, love – and it’s a first-person narrative, which I’m very excited about.

As for book 4, all I will say is that I’m spending my New Year in the Italian Lakes this year… Look out for lots of photos!

FIND OUT MORE ABOUT A YEAR AND A DAY