Maggie Ritchie's first novel, Paris Kiss, is out in February and is based in Bohemian Paris in the 1880s. It's the story about a young English sculptor Jessie Lipscomb who joins her friend Camille Claudel to become the protégée of the great Auguste Rodin. When Rodin and Camille embark on a scandalous affair, Jessie ends up as their unwilling go-between and their friendship unravels. Years later she finds Camille in an asylum and discovers an explosive secret. 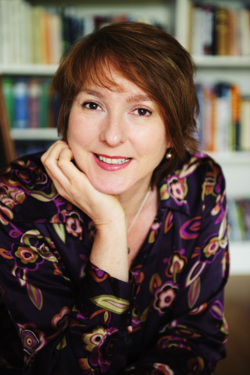 If I haven’t had time to write during the week, I go to Glasgow University library on Saturdays and write for four hours. But I usually try to steal at least one or two days from my work as a freelance journalist and keep the weekends free for family.

I’ve tried to base characters on people I know but they never turn out as interesting as the made-up ones and I have to ditch them. Sometimes, when I’m trying to create a male character, I’ll have a picture of Charles Dance or the young Terence Stamp in my head as a starting point, but they soon become their own people.

Nancy Mitford’s Pursuit of Love is the original rom-com with a cast of eccentric characters modeled on the author’s own potty upper class family. Set in the 30s and 40s, it’s a comic tale of Bright Young Things and their search for love. I’ve read this charming book time and again – and the ending always makes me cry.

I’ve learned to plan. I dived straight in with my first novel, Paris Kiss, and about halfway through I realised I needed a plan. I ended up rewriting the novel three times to sort out the mess. I meticulously planned my second novel and thought about character, point of view and structure much more.

As a result, the rewrite is much less troublesome. I’ll do a final polish before I send it to my agent.

I did a Creative Writing post-graduate degree at Glasgow University over two years to force myself to write the novel that became Paris Kiss. I submitted to seven agents and was lucky that Jenny Brown got back to me within a month and took me on after a big rewrite. Two years and a further rewrite later she found a publisher, Saraband.

That novels are based on characters and events from the author’s own life. I draw on my experiences and the world around me, but the characters have a life of their own.

Start with a story idea that intrigues you and play around with it. Mindmaps are good. Think about characters and what they want to achieve and what’s stopping them; do some research and plan, thinking about dramatic highs and lows. Complete your first draft – it’s a marathon and lots of people give up before they reach the finishing line.

My second novel set in post-colonial Southern Africa where I lived as a child. My first novel, Paris Kiss, set in 19th century Paris, needed masses of research. I thought I could rely on my memory and imagination for the new novel, but I ended up doing a lot of research, speaking to people who had lived and worked in Africa in the 70s, and it added to the richness of plot and setting. I’ve also started researching and dreaming up the characters and plot for my third novel, which will be another foray into the 19th century. Back to the library!