Rosie is the author of over 20 bestselling historical fiction novels. She is also the first author in the world to be allowed to follow three of Catherine Cookson's trilogies with her own sequels, which is an amazing feat! Her new paperback The Soldier’s Daughter came out recently and The Mill Girl will be published on November 6. 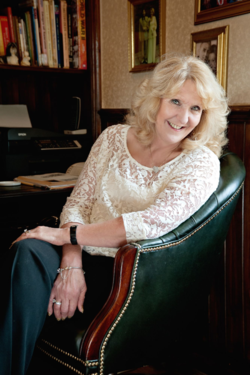 Unless I’m working to a very tight deadline I don’t have set working hours. In the summer I like to be out in the garden during the day but at any time of year my favourite time for writing is always in the evening when everywhere is quiet and all the jobs are done. There’s nothing nicer than to be shut away with the characters you’ve created in the book with no disturbances!

Not really. Once my characters have developed and come to life I tend to be so wrapped up in them and so absorbed in writing the book that I don’t really think about anyone else or even watch much TV.

That’s a hard question for me. I’ve read so many brilliant books by talented authors but I suppose Catherine Cookson’s The Dwelling Place would have to be one of my all-time favourites. I’ve read it a number of times and still enjoy it. I’ve always been a huge Cookson fan and think the woman was the Queen of storytellers.

I tend to start with an idea and then just dive in! My poor editor has given up asking me for proposals now because she knows they’ll always end up entirely different. I find that once the book is started and the characters have come to life they seem to take over and I’m always happy to let them. I get the first draft of the story down and once it’s finished I go back over it again making any changes that I think will enhance it before passing it on to my editor.

It took me approximately five years before I had my first novel accepted when I began to write seriously and I’d begun to think it would never happen. There are so many wonderful writers about nowadays that I think it’s harder than ever to become published but it’s worth all the pain and rejections when it finally happens. I began by writing poetry and short stories before progressing to novels and it was after one of my short stories was accepted by a magazine that I decided it was time to attempt my first full length book.

For some reason everyone seems to think that all authors are millionaires! Of course that’s far from the truth. Most authors start off with quite a low advance and then it builds with the book sales but it would be very nice if it was true!

I would tell them to write about what they know. They say there is a little part of the author in all their books and I do believe this is true. Also, be prepared for rejections. It is very rare for an author’s first book to become an instant bestseller but stick at it.

I am currently working on the second of a series of three books. The first one will be out in the spring next year and I’m really enjoying it. It’s basically set around two very different families and starts before World War 1 and will go through to 1930 so that it will span three generations. There is something quite heart-breaking that binds these two families together but I don’t want to give too much away.