Summer at the Lake, which is out in paperback today, is Erica James’s 18th novel. Here, she talks about her inspirations, writing routine and the two most terrifying words in the English language. 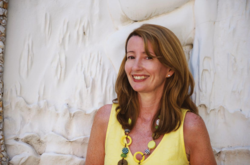 I’m quoted as having an insatiable appetite for other people’s business in the hope of coming across something useful to go in a book and that, in a nutshell, is the source of my inspiration: people. A person might tell me something, which on the face of it is isn’t really that interesting, but so many times that little seed will put down a fragile root and before long a series of thoughts will have been triggered until eventually an idea for a book begins to blossom.

I aim to be in my study and ready to start work by about eight-thirty in the morning. First I’ll deal with any emails as quickly as possible – I hate anything that distracts me from what I see as proper writing – and then I’ll get down to business.

From then on my day is punctuated by too-many-to-count cups of tea, which are vital to keeping the wheels of creativity nicely oiled. I’ll often eat lunch (usually salad) at my desk, which I know is a disgusting habit. If I’m in need of a short break and a change of scene I’ll eat my lunch in the kitchen while reading something completely non book related. Twenty minutes later and I’ll be back in my study and will generally stay there until about seven in the evening.

I’m guilty of doing this quite a few times, often with the male characters in my novels. For instance I used George Clooney in the role of Theo for The Holiday, Martin Freeman came in handy as Clayton Miller in The Queen of New Beginnings, David Tennant was perfect for Noah in Tell it to the Skies and latterly Andrew Scott (aka Moriarty) made a very convincing Sebastian in Summer at the Lake.

Diary of a Provincial Lady by E.M. Delafield is one of those books I return to again and again. Published in 1930, it’s a fictional diary about the humorous trials and tribulations of a middle class disaster-prone wife and mother. The joy of the book is that it’s gloriously mundane, but I defy any reader not to identify with the diary’s heroine.

I love to write about families and nobody does that better than Anne Tyler. She’s a class act when it comes to portraying family life, she’s never judging, never preachy, always compassionate. She’s also a great example of the less is more rule when it comes to writing – if in doubt, leave it out!

My favourite Anne Tyler novel is Saint Maybe and is a perfect example of the way in which she writes about families.

Life According to Lubka by Laurie Graham is a wonderfully funny and life-enhancing novel.

Ken Follett’s Winter of the World – a mighty nine-hundred-page novel set against the backdrop of WWII – is storytelling on a grand scale and while I’m only two hundred pages in, I’m loving it!

What is your writing process?  Do you plan first or dive in? How many drafts do you do?

Before I start work on a new novel I put together a cast list of characters and in the main it’s their interaction that will drive the story. I was told many years ago that women’s fiction tends to be character driven whereas men’s fiction will be heavier on plot, and while it might be a generalization, it’s something I always bear in mind.  Once I have a feel for my characters and I can hear them talking to each other in my head, I hold my breath and type the two most terrifying and exhilarating words in the English language – Chapter One.

I write two drafts – the first is very rough and is literally going about the business of throwing the story down and not worrying too much about the detail, it’s about seeing what sticks and what doesn’t. By the time I start on the final draft I’ll know my characters inside and out and will know what stays and what goes.

With what I would describe as absolutely no previous or relevant experience. I started writing in my early 30s when I was a stay-at-home mother with two young sons. I viewed it as nothing more than a hobby, a form of escapism you could say. However, I found I soon had the bug for it and eventually plucked up the courage to go on a writing course. This further fuelled my interest and got me started on writing something that went on to be called A Breath of Fresh Air – three years later it became my first published novel and a Sunday Times bestseller.

There’s an assumption that the more you write the easier it becomes. If only that were true! For me the start of a new novel is like standing at the bottom of a mountain and staring up at the top and knowing that there’s only one way to reach the summit and that’s to climb it one day at a time. The trouble is, with each book I write – Summer at the Lake is my 18th – that mountain gets higher and much steeper!