After twelve publisher rejections for The New Mrs D based on its ‘crude and close to the bone humour’, mum of five Heather Hill decided to self publish, which resulted in great success. Here, the Scottish-based author joins us to talk inspiration and going it alone in the world of publishing.

I am a bit of an unusual comedy writer I think, because, whilst I have funny ideas all the time, I think very deeply about serious issues – particularly those which affect women. So my work typically takes very serious issues that you wouldn’t normally associate with humour and presents them in a chatty, stream of conscious writing style which I hope talks directly to people right from the pages.

I read a lot and watch documentaries and films that touch on the issues prevalent to women in modern society and then I think, ‘how can I get people from all walks of life to talk about this?’ The answer is always in my comedy writing. Strange, but true.

I’m not the kind of writer who sees something on a train and invents the character of Harry Potter; I’m more the, ‘oh look, there’s a deep and painful issue. I wonder if I can write a comedy about that?’ Sounds awful on the surface, but it really isn’t. I am a great believer in the power of comedy to reach people on a level that most can understand and appreciate. It’s a fine line to ensure you remain tasteful, respectful and write intelligently about whatever the serious issue may be, but the strength of humour is that it is indeed medicinal and can bond people from all walks of life. The power to laugh at yourself is an incredibly healing thing. And no, I never treat these issues lightly in my writing. People do often assume that works of comedy can’t tackle serious issues intelligently. That just isn’t true. Of course, humour is very subjective, but then you have to find what works for you and I have had a lot of messages from men and women thanking me for reaching them. That in itself makes it all worthwhile.

I have a very busy household, being a mum of five. Although three have left home and the remaining two are at that ‘my bedroom is where I live, keep out!’ stage in their lives, I have a new grandson, three cats and two dogs. And no matter how many times we move house they all keep finding us.

What was that you said? Average writing day? I wait for a pause in background noise, lie on the floor in front of the fire – pushing out two very annoyed dogs – and scribble. I’m one of those old-school, longhand loving writers. I live for the scrawl of a really sharp pencil on crisp, new paper. And three extra writing hours typing it all up later…

Famous people – not as yet. People I know in real life? Most definitely! I have a cousin who I thought I knew never reads books. She is gorgeous and has a unique sense of style, always taking great pride in her appearance – so much so she’s kind of famous for it. One night, a group of us girls from my family were all out in Glasgow and she was so proud of the brand new blouse that she’d bought just for the occasion. We arrived at the first pub and discovered every barmaid in the pub was wearing her blouse. We were all beside ourselves but she was not amused! I wrote something like this in my novel for my protagonist and just the other week she came round to tell me she’d read it – before pffting me with a towel for outing her embarrassing experience. She did laugh about it though! 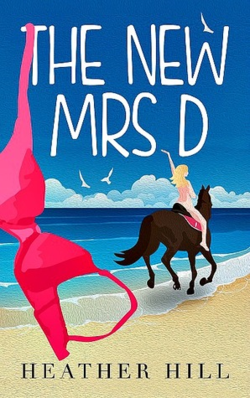 I love books. The smell, the feel and the delicious interruption to daily life as I dive into one, so asking me this question is like asking me to pick a favourite child. My favourite women’s fiction book is the one I read last year, last week, now and tomorrow. The imagination is a fantastic thing and diversity in women’s writing is wonderful; I can’t get enough of it. Can I stop talking now to read?

Okay, and Sue Monk Kidd’s The Secret Life of Bees.

It would have to be Amanda Prowse, who has literally given me kicks up the bum when I have felt my confidence waning. And with Amanda you don’t get that sisterly arm around the shoulder and ‘here’s a hanky’. It is literally, ‘stop whingeing and get on with it!’ I so love her for that. She writes beautifully and with such heart that I am both in awe of her as a writer and just overwhelmed that she would give me the time of day. One day I was reading about her in Women & Home Magazine, the next I was buying and reading her book and then one day, she was tweeting that she had bought mine. Surreal… and lovely.

If you are a writer just starting out and you haven’t read Stephen King’s On Writing stop what you are doing and read it now! When I was working on my first draft I had a crisis of confidence right in the middle of it and a friend told me to read this. I can’t tell you the number of ways it helped me.

Life After Life by Kate Atkinson is what I would call a real education in writing a page turner. As another great author, Liz Fenwick once said to me, ‘the pages just turn themselves.’ This is a stunning book and really made me want to strive to get where Kate is. She’s an amazing writer and I’m very proud to have met her and have a signed copy on my shelf. She probably will never remember me, but I will always remember meeting her.

I loved Jonathan Livingston Seagull by Richard Bach. It is very short, extremely moving and very clever. But what is even better than all of this is that, as a writer, its story drove me onwards. To quote from the book, ‘Don’t believe what your eyes are telling you. All they show is limitation. Look with your understanding. Find out what you already know and you will see the way to fly.”  Jonathan Livingston Seagull was reportedly rejected eighteen times, yet the book was eventually published by Macmillan and became a number one bestseller. It sold more than 1 million copies in 1972 alone, and was made into a movie.

I am a planner. Most definitely. I have a beat sheet that someone gave me and I’ve used it to map out sections for the entire novel where certain things are supposed to happen. Novels have beats and I have learned this the long way with my first one. I ended up doing over twenty rewrites in the end. It’s all about taking your protagonists life and twisting it in different ways at certain points throughout the novel. I hope it keeps it interesting and surprising.

I also share work with a few choice other writers. My best writer pal is an emerging YA author in Australia, Fleur Ferris. She’s an amazingly supportive lady who has just won a book deal with RandomHouse and I couldn’t be more thrilled for her. She is so talented and we often swap work for brutally honest feedback. It is great to find someone you can trust enough to tell you something is shit when it is shit and you didn’t see it until they pointed it out. I am so grateful for finding Fleur.

That they can take a put down. I can’t profess to knowing lots of novelists personally but I follow and friend them through social media and I see a lot of self-doubt evident in the most talented of authors. Self-doubt is the biggest killer of creativity, I think. And those awful reviews really do hurt sometimes.

The person who made me stop doubting that my comedy could reach people in crisis and write my first full novel was Hywel Jones, who I first met on Twitter. He was dying of cancer when he told me, ‘live to do the things you did do, not the ones you didn’t.’ I decided to keep my whacky ideas and go with them. I ended up with an agent but twelve publisher rejections for my novel based on its ‘crude and close to the bone humour’ and ‘a protagonist no one will relate to’. It was labelled ‘unmarketable’. Yet it hit number one in the overall best sellers chart in Australia.

So I guess my journey is still ongoing, although I pressed on regardless to self-publish. Last month I wrote to Barnes & Noble asking them to stock my book on their shelves. They replied, ‘in our experience the majority of self-published authors sell 200 books in total, so we don’t accept them.’ I’m happy to report I am not in the majority. Nor do I ever intend to be. The secret to my writer journey is keep writing, keep going, keep believing and keep filing all my ‘no’s’ in a drawer marked ‘SO WHAT’.

I could steal the words of many an author and say, ‘just write the novel!’ But, more importantly, climb over yourself and do it – because you and I know that it is YOU that is in the way of your book’s completion. Get back to it and remember, first drafts are always far from perfect … and that is just fine. Think of it as that first undercoat when painting the living room.

A comedy novel with a working title I rather hope I get to keep. It’s called, I Hate That You Bloody Left Me and it’s about three widows – all deliciously flawed in their own way – that meet in an online chatroom and decide to go together to see a famous psychic medium, who is doing his last ever show before retiring in the hope that they might get a message from their late husbands. When none of them do, they follow him to his holiday home in the Scottish Highlands to beg him for a private sitting and end up accidentally kidnapping him. What follows is a series of hilarious misunderstandings and mishaps, but the deeper meaning in the story is that the three women find they are linked in ways they never knew and that perhaps their meeting wasn’t by chance at all. It’s a story exploring life, death, life after death and running away from the cops. My opening line is: Sometimes I get so lonely and so frustrated, I buy sexy vegetables – Fleur Brookes, Widow, 68. So my guess is twelve publishers are going to find it too crude and close to the bone again. Ho hum!