Josephine Moon’s debut novel The Tea Chest, which we reviewed this morning, was published yesterday. Here, she chats about how aroma sniffing and shaking tins in a tea shop inspired the story, why writing characters is a little like herding cats and what’s next for her as an author. 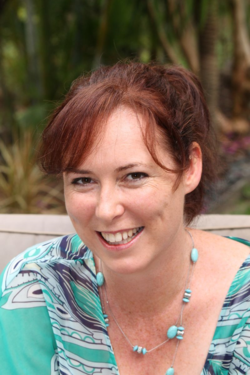 Before The Tea Chest, I had written nine other manuscripts (that have not made it to publication) and they are all very eclectic in subject matter. If I think about it, each one reflects whatever subject matter I was passionate about at the time.

At a scene level (because a whole book is made up of hundreds of scenes), it’s much more interesting. Sometimes I’ll go to an arty café or a bookshop with the intention of writing a scene, with only the vaguest idea of what that scene is about. But then an object will catch my attention, or I’ll see a photo in a book, and it will spark the direction of the scene I’m there to write.

As far as The Tea Chest goes, that literally began with me wandering through a tea shop, inhaling aromas and shaking tins of tea, and I thought, “What an awesome job! Who gets to design all these teas?” And with that, the character of Kate Fullerton arrived.

I have a young toddler, we’re renovating a house, my husband also works for himself, and we have twelve animals in our care, so I really struggle to find an average day! The way I used to write before I had my son was very different to how I have to write now and I’m still trying to work it out as he really dictates what I can and can’t do, and that changes all the time depending on his age and stage of development.

I do have a (wonderful) nanny who comes in for half a day three days a week and that gives me space to work, and my husband is very supportive in terms of giving me extra time to myself on the weekend if I feel I’m slipping behind or I need to re-stock my well. And I try and throw in a mini writing retreat for a few nights every couple of months. When I’m alone with my son, I focus on things I can do in bits and pieces and short timeframes while he’s busy. Things like emails, social media, shopping for stationery or books, setting up meetings etc. In general, I like to leave the house to write new scenes, and bunker down in my writing room to edit.

To an extent. Sometimes I’ll reach into my memories for an image or a way of speaking, but that’s always just a leaping-off point, one tiny fragment of what the character becomes as a whole. My characters become very real people to me and I love them dearly. It sounds weird to some people, but every time I start a book I think I’ll create a list of characters that will serve my book and my story … but they don’t! They do whatever they want to! It’s a lot like herding cats.

Really? Just one? Oh my gosh. The whole reason I write women’s fiction is because I love the genre so I have many favourites. If I have to choose just one (which is terribly unfair), I’ll go with At Home with The Templetons by Monica McInerney. I think that book is as close to a perfect book as I’ve ever read. Monica is such a great storyteller and writes such human characters, and the love story in that book is compelling to the last.

Modern: Liane Moriarty’s, The Husband’s Secret. (So, so good!)

Classic: James Herriot's Vet Stories. (I know he’s not a female women’s fiction writer, but if you love animals and humour, you can’t go past him. A brilliant, brilliant writer. I have an incredibly battered copy of this collection, which starts at his first interview for his first job at Skeldale House as a recently graduated vet before the war, and it’s timeless.)

Gorgeous: Chantal Coady’s Rococo – Mastering the Art of Chocolate. (A feast for the senses.)

A bit of both. I start with a notion of what I want to write about. Then characters begin to appear – some of them completely uninvited, and they are often the strongest characters. I don’t really know my characters until I’ve written ten to twenty thousand words, so I often delete a lot of these ‘getting to know you’ scenes later on.

Once I know what I’m doing, I will do a big master plan and plot out the major points and shifts I know I need to hit and at roughly what word count those things need to happen (which ensures I don’t ramble on too much). Then I write, then plan some more, then write, then plan.

If ever I feel stuck, it’s usually because I’ve lost the plot (literally) and I need to go back to my master plan and connect with what I’m trying to do. But, even then, I don’t really know what I’m doing until the end of the first draft. Then I do a pretty heavy re-draft/rewrite between first and second drafts. After that, it’s as many drafts as it takes, but let’s say less than ten overall from beginning to print.

In summary: twelve years, ten manuscripts, countless rejections, a lot of tears, some good friends, many workshops and courses, some notable shortlistings and competition wins, and adventures into self-publishing.

Then, a very lucky break – Monica McInerney passed my manuscript for the The Tea Chest to her agent, Fiona Inglis of Curtis Brown Australia, who then became my agent and it was a pretty fast move to a contract from there.

Perhaps it’s not a myth, as such, but the most common reaction I get from people is about the drafting process. They might ask me where I’m up to on a book and I might say something like, ‘I have a messy first draft’. And they say, ‘What do you mean?’ They just don’t understand the lengthy process that follows and the number of drafts you need to do. I think many people think you just sit, type and press print and it’s done.

Similarly, people will often say, ‘How many words can you do a day?’ but that’s really such a small part of the whole process. I might take four or five hours of reading, thinking, mulling and actively seeking inspiration before I can get one hour at the keyboard and a thousand words. It’s not a typing test  For me, it’s not about the act of typing but rather the mental effort behind it that’s the hard part, and I can’t always schedule that.

Understanding what you want from your writing is a really big thing.

If you want to bang out a novel during NaNoWriMo and pass it around to your friends, that’s great. You could even publish it online and have a copy on your shelf and be proud that you did it. There’s a lot of joy in seeing that manuscript take physical form on a shelf and that’s something to celebrate. Maybe you want to write a history for your family to have on record. That’s great too and it’s a wonderful time in technology right now for you to be able to do that really easily.

If you want to be a career writer (a professional author), then you’ll need to accept that you’re unlikely to crack a publishing deal on the first manuscript. And that’s normal. Rejection is normal. It doesn’t mean you’re a bad writer. It just means you’re still finding your voice and the right book for the marketplace. But once you’ve written a manuscript, be prepared to let it go. By all means, re-draft it, edit it, submit it to your writing group for critique, and sit with it till you feel you’ve come to the end of your journey with that story. That will teach you how to be a professional writer. Then say goodbye and write another one. Don’t get stuck rewriting the same book over and over for ten years. Write another one. And another one. And another one. And one day, you’ll have the ‘right’ book for you at the right time and you’ll look back and think, ‘Oh! I get it now.’