Judy Astley has come a long way since she was fired from her job as a secretary at Heathrow Airport, aged 19, for putting personal story-writing use of the office typewriter way above the airline's Lost Cargo reports. Eighteen books later and she remains a firm favourite in the women’s fiction community with her much-loved first novel, Just for the Summer, reissued by Transworld Books today. Judy joins us now to talk about all things writing including waiting for characters to 'leave home' between manuscripts. 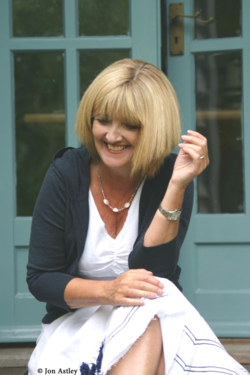 Inspiration can come from anywhere. A whole book can come from something as small as an overheard remark. My next book, It Must Have been The Mistletoe, was loosely (very loosely!) based on a big family bank holiday reunion weekend last summer. In The Summertime is a twenty-years on continuation of my first book, Just For The Summer, which was the result of watching the interaction of visitors to a Cornish village over a very wet three weeks. Book two (Pleasant Vices) started with a comment from my sister-in-law that she’d put a card in a newsagent’s window, offering flute lessons. The replies she got were all from eager gentlemen wanting something completely unconnected with music, which was rather a surprise to her.

I’m a terrible procrastinator but there’s some sense to it. I like to get everything non-writing that needs to be done out of the way first so I can then get properly immersed in work without thinking I still need to buy food/take cat to vet/run out for essential nail varnish etc. But by at least 4pm I can settle at the computer and do a few fast hours. There’s such a buzz when you emerge at the end, if it’s all gone right.

I don’t use famous people. For one thing, often a year or two later they could be way off the fame radar and a reader coming late to the book will be left thinking, “who?”.

When it comes to people I know I really don’t like to use those either because I feel you are sort of stuck with what you know about them. I like my characters newly-made so that anything is possible about them. I did once put a friend’s husband in, just in one quick scene, but she read it and then asked which one he was so I obviously got him all wrong!

It has to be Nancy Mitford’s, The Pursuit of Love. There isn’t a wasted word in it. It is sublimely written, funny, witty and the characters are so brilliantly portrayed, every one of them. And it is so of its time – the pre-war cold, the awful food, the wonderful Uncle Matthew and his eternal grudge against The Hun. I love it and have re-read it many times.

I like humour, I like fun in a book. I was halfway through my first novel, wondering if it was any good, having beginner’s doubts and then I read Sarah Harrison’s Hot Breath, followed by her Cold Feet and thought, yes, this is the sort of way my book is going and I felt somehow validated. So I’d say she was quite an inspiration.

I absolutely loved A Humble Companion by Laurie Graham. It’s so wonderfully written and absorbing, as are all her books. I recently re-read Barbara Comyns Our Spoons Came from Woolworths, which is a spare little book with a writing style that if it were a painting would be described as naïve and is quite perfect. I’ve also just read A Girl is a Half-formed Thing by Eimear MacBride, which took some getting into as it’s written as very much a stream-of-consciousness piece, but once you get into it it’s completely mesmerising and wonderful.

I’m not much of a planner but I do start with some idea of a theme, some people and where it’s likely to end. I put together a very brief synopsis so I don’t forget and I make a lot of notes, putting together bits of overheard conversations, ideas for scenes, characters and so on and then I just dive in, write a first sentence I’m happy with and take it from there. I don’t do drafts, not in the sense of getting to an ‘end’ and then going back to the beginning and re-writing, but each chapter will have been edited and tweaked quite a few times along the way. Events and scenes in the book often surprise me as they’re essentially unplanned – I like it that way as it’s quite exciting at times but at the same time there are days when I think, oh if only I could be one of those who planned each chapter and everything in it in advance. I’m sure that would make life easier.

It was a bit of a roundabout route. I’d written stories when I was a teenager and sent them to magazines but didn’t have any luck. I’d always liked writing and had a go at my first novel when I was about 19 and working as a temp for an airline but I didn’t get past chapter three. After an English degree I worked as a medical temp, had children, became a dressmaker/designer for Liberty and then a painter and illustrator with a cute little children’s counting book published. Then one rainy summer on holiday in Cornwall I realised the village I was staying in would make a fun book and I went home and started.   sent off the manuscript in a Liberty print folder and so stood out from the rest of the slush pile and it seems several at Transworld liked it. So it went from there. I was very lucky – it was about 23 years ago. These days you’d probably need to get an agent first.

That we’re all raking in the cash at near-JK Rowling level! When people at parties etc ask what I do, and I tell them I’m a novelist, I can see it in their eyes: “So how much do you earn?”. They’re usually British so they don’t ask directly.

What advice can you give to readers who want to write a novel of their own?

Not long ago I’d have suggested reading everything in your chosen genre. Now I’m not so sure. If you’ve got a great idea, try writing it without the influence of something you’ve recently read so that you can work with your own voice. And don’t get confused by the millions of Writing Tips that are forever being posted online. Essentially there are no rules – I bet Dickens didn’t think, ooh not sure if that story arc works; they weren’t invented then. Just go for it.

I’ve just finished writing one, called It Must Have been The Mistletoe, which will be published later this year so I’m what you might call Between Books and working on several vague ideas for a new one. I like a bit of space between books just to refuel the brain with some thoughts and to let the last lot of characters ‘leave home’. At the moment this one is still bringing its metaphorical laundry back to me in terms of copy edits and proofs so once that’s all done with I’ll get on with another.