Kendra Smith’s debut novel, Jacaranda Wife, was a runaway Amazon bestseller this summer. Kendra joins us now to talk about what it took to get her book there including eight drafts, two agents and lots of tears and wine. 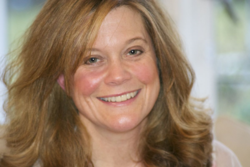 Tell us about Jacaranda Wife.

Jacaranda Wife is about a family who journey to Australia and replant themselves Downunder. Our home-loving heroine, Katie, finds herself tightening her seatbelt on a plane to Sydney – and her grip on the armrest. She doesn’t much like heat, can’t swim properly and finds herself further outside the M25 than she feels is strictly necessary. Who she meets, and how she copes with a move 10,000 miles from home, forms the basis of the book. There are quite a few obstacles in her way, including a Sydney yummy mummy with a competition-level cleavage, eyeing up her husband, then there’s her fear of spiders and bouts of homesickness, and that’s before she tackles her terror of the ocean.

I discovered that Jacaranda Wife had hit the #1 spot in the Australian Kindle charts whilst at the dentist; it was all I could do to not kiss the guy! To say I have been a little excited finding that out, is like saying that Prince George is a bit cute.

From life. For Jacaranda Wife my inspiration came from the fact that I have lived in Australia for almost 10 years in total, if you count all the boomeranging back and forth I’ve done. I wanted to explore the issue of ‘where is home?’ and create a likeable heroine, who is real and has flaws. One of my reviews has said, ‘there is a bit of Katie in everyone,’ so I do hope that many readers will identify with her. Another big inspiration has been my children. They make me laugh and cry! I love them to bits, and wanted to capture the highs and lows of parenting in my book.

Hmmm. There isn’t too much of an ‘average’; it depends what else is going on (hockey matches, swimming galas, football tournaments, people needing fed – sometimes). On my writing days (the days left over from pairing odd socks), I try to work from about 10ish to school pick up, about 2.30pm. Of course, however, some of that time is spent doing ‘research and promotion’ – that’s Facebook and Twitter. The secret is to do that after you’ve done your writing. The other secret? Never tell the family what you plan to make for dinner. Never say,  ‘Oh, I think we’ll have seared chicken fillet fajitas with sour cream teamed with a coriander and tomato relish tonight!’ Don’t do this. Because when you produce beans on toast for the third night running, as you have been writing, their expectations won’t be set too high.

Now that would be telling! Yes of course, I do use mannerisms or traits in people I know, from time to time, but I amalgamate them and add them to my characters, who are very firmly formed in my head. I never use celebrities, however. But what I do do, and Sophie King taught me this, is I will search through papers and magazines for a face that ‘fits’ my character, cut it out and put it in my writing scrapbook. When I look at that person, I feel I am looking directly at my character.

Allison Pearson’s I Don’t Know How She Does It. I just loved it when I read it, as I was in my early parenting days and juggling freelance writing and the book seemed to speak to me.

Quite a few have, can I have more than one, please? Obviously Allison Pearson (see above), and I used to love her columns in The Evening Standard, and now the Telegraph. I enjoyed Helen Fielding’s Bridget Jones when it first came out, and I also read Wife In The North by Judith O’Reilly and much of what she’d gone through chimed with me. When I was in my teens, I used to steal my mum’s Joanna Trollope books and they probably kick started my love of commercial women’s fiction. I also enjoy Nikki Gemmell's writing style style, as well as Kate Atkinson.

For Jacaranda Wife I did about eight drafts. And I also, having taken advice, changed the point of view entirely in the whole book, at a very late stage. This was a painstaking re-write of the novel, but I think it ended up better for it. I wrote scenes and planned a bit as I went.

Once I had a first draft, I moved things around, edited out chapters and wrote new ones. With my second book, I have more of an outline plan and am writing to fit a bit more, however, just recently a plot line I had been following fell through (something I researched meant that I had to change it), so my novel is going in a slightly different direction. 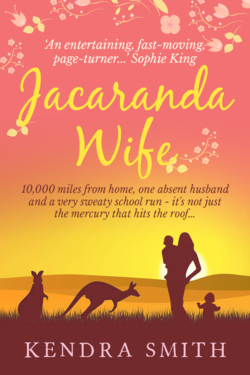 Long and torturous – is there any other way? In total, it has taken eight years to get my novel written and published. I am a journalist and have worked in publishing all my life (women’s magazines), but after I had my first child, I wrote a book (about parenting) which I nearly sold to a publisher directly. At the time, I was told, you’re not a celebrity and although the editor loved my submission, because I wasn’t a name, they didn’t take the book on.

Several years later, I wondered if I could achieve the ultimate writing goal, a novel. To cut a long story short, I’d started typing away as the baby napped and scribbled notes where I could. We were living in Australia at the time, and, funnily enough, as the kids were young, it was one of the busiest times as a mum, but I really needed some creative outlet. Folding tea towels in a new and funky fashion wasn’t cutting it for me. Once I had the semblance of a novel, I was lucky enough to secure an agent (from the UK) the first time round. She loved my writing, loved the book. Finding a publisher, however, proved harder.

By this time, we were planning on returning to the UK, so the book took a backseat. Re-planting a whole family back to the UK after five years abroad takes supreme effort, so my writing brain was engaged elsewhere for a while. But still, the book would tap me on the shoulder at night and demand to know what was going on.

Agent #1 and I had a great relationship, but then there was the tiny problem of an economic crisis. Publishers tightened their belts. Debut authors were too risky.

After a while, my agent and I parted company on very good terms. Both of us decided that I needed another steer. I then used the services of the wonderfully helpful The Writers’ Workshop for a manuscript review, which was – let me remember – 17 pages. But, the one shining light in the report was the comment, ‘You can clearly write.’ Thank goodness for that.

The rollercoaster ride began: I would send out my partial and … WAIT. I had several agents ask for the full manuscript, and each time my heart soared. One agent asked for the full book after three hours. It was a high-adrenalin ride. But there were also crash-landings along the way involving tears and wine.

Ultimately, my agent, the lovely Annette Crossland from A for Authors rang and left a voicemail saying she loved it after I had sent it to her 10 minutes before. Finally, I had someone on my side. She read the full book and wanted to represent me, so I was over the moon. We pitched to quite a few publishers and in the end, went with Endeavour Press who wanted it for their growing e-book fiction list.

The number of people who have said to me, ‘Do you wait to be inspired to write?’ Heck, no! That’s like telling my children to wait to be inspired to load the dishwasher. Let’s face it, inspiration can come when you are reversing the car, but the point is, you need to write without any lightbulb moments. Being a novelist means sheer hard work and determination and getting words on a page.

See above. You have to want to do it. Join writing groups and keep going. So many people have said to me, ‘Oh I’d like to write a novel, but there isn’t any time’. In fact, if you really do want to write a novel, then do it. Stop watching TV, stop going on Facebook, and sit in front of a keyboard! No more excuses.

It’s a book about three women who all have different wants and desires – plus a few secrets. It’s about love, honesty and friendship.