Mrs Sinclair's Suitcase by Louise Walters, a debut novel about family secrets, soul mates and missed opportunities, was published last month. Here, Louise talks juggling her writing career with being a housewife, the enduring qualities of Jane Eyre and borrowing writing techniques from other authors. 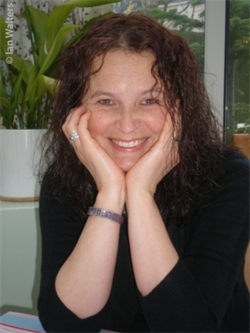 I don’t really have an average writing day. I have five children and I’m a housewife and I fit my writing around those things – although I am learning to let the housewife bit fit around my writing these days! I try to write for a couple of hours on weekday mornings in term time, when I have the house to myself, and I have a few hours at the weekend sometimes. I also write in the evenings if anything is pressing.

I don’t base my characters on living people. I get a lot of inspiration though from listening to people talk, and observing how they dress. Clothes are quite important to me – I like to “see” what my characters wear because I learn quite a lot about them from that.

I’m always inspired by other writers and I like to read a lot while I’m writing my own stuff. Also, music can help.

I’m not sure it’s Women’s Fiction, but it was written by a woman and has a female narrator and protagonist – Jane Eyre by Charlotte Bronté. It’s probably the best novel I’ve read. I love everything about it, and I find it fascinating that it still generates so much debate. I think Charlotte herself would have been amazed, and possibly embarrassed, by the enduring quality of her and her sisters’ writing. I studied Jane Eyre on one of my Open University courses and I really enjoyed reading it again in new ways, from a feminist point of view and so on. It has got everything, from romance and intrigue to horror, betrayal, jealousy, difficult childhood issues, you name it, it’s in there, and I can’t wait to read it again. And Mr. Rochester is my literary crush.

I plan a little, but probably I’m more of a dive in type. I like to think about the characters while I’m doing other things, and some of my best ideas have popped into my head when I’m not at my laptop. Often I get brainwaves in the shower. I do one draft, then go back over it, editing, and I’ll save as a new draft once I’ve made enough changes to warrant it being called a new draft. For Mrs Sinclair’s Suitcase, I got up to draft 22 and the differences between draft one and that final draft are immense. It’s a gradual process, with constant tinkering.

I wrote Mrs Sinclair’s Suitcase over a few years. In Autumn 2011, I was stuck at around 60,000 words and I didn’t know where to go with it, so I decided to submit it to a couple of agents just to see what response it would get, if any. I got a rejection within eight weeks from one agent, and heard nothing at all from the other, so I then decided to get a professional critique. Around about the time I got the critique back, the agency I hadn’t heard from contacted me out of the blue asking to see the whole manuscript. This was five months after my submission. The agent I’d sent my submission to was on maternity leave and another agent in the firm was going through her slushpile. So I explained I was going to be doing a lot of work on the novel in response to the critique, and would the agent like to wait, but she said she’d prefer to see what I’d got. In March 2012 we met up and she sent me away with editorial ideas and, after I’d sent my re-worked novel back to her, she offered to represent me in April 2012. In May 2012, my agent submitted to about eight publishers, all of whom rejected the novel. So we did more editorial work in response to the editors’ comments (there was a lot of useful feedback), and in September 2012 my agent submitted the manuscript to another batch of editors. One of them, Hodder and Stoughton, made an offer in October 2012 to publish my novel, and it was published in February 2014 in hardback, and will be published in August 2014 in paperback.

Oh, that’s quite tricky. An awful lot of people have asked me if I designed the book cover, which I didn’t. I love the cover and I was asked what I thought of it, of course, but I didn’t design it myself. I wouldn’t know where to begin.

Read a lot. If you read a book you love, read it again, but analytically, and discover why it works for you as a reader. Then use those techniques in your own writing. Don’t be afraid to “borrow” techniques or styles. I do it all the time. I agree with the advice that you should write the book you want to read, but I also think it’s important to remember that if you’re successful, many other people will also read it, so you have to write with half an eye on them, especially in later drafts.

I’m tinkering with two projects and I’m not sure which one I’m going to commit to just yet. I’ve got “difficult second novel syndrome", so I may put my second one on the back burner, and work on my third instead. I’m just glad I have ideas for a few stories and I’m not completely stuck.