Polly James joins us today to chat about her debut novel, Diary of an Unsmug Married, authors she finds inspiring, and her insomnia-driven writing schedule. 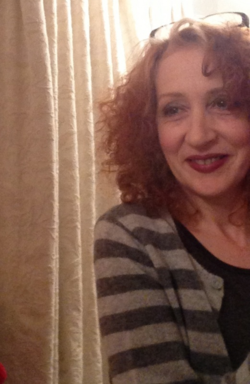 Anywhere and everywhere, though I do tend to follow the advice given to all aspiring novelists to write about what they know, which in my case is mainly being a wife, mother, daughter and employee, I suppose. When I do struggle for inspiration, I tend to find that – as long as I can find something to latch onto as a starting point, however simple – it doesn’t then take much for me to know where I’m going to go with it.

For example, I was once desperate for an idea for a blog post and begged my husband to tell me about his day at work as I hadn’t been anywhere or seen anyone myself for days. He was no help whatsoever to start with, as he just said that it had been deathly boring, and that nothing of any interest had happened at all. To emphasise his point, he then told me that the main reason it had been so tedious was because the only thing his colleagues had talked about all day was a “foodie” Scotch egg that one of them had bought into work in their lunchbox.

I ended up writing four blog posts from that one small incident, just by taking what my husband had said as my starting point and running with it – with the result that Molly became ill after eating a leftover Scotch egg bought by one of Max’s female colleagues. She then developed a high fever during which she became irrationally convinced that the colleague had deliberately poisoned the egg because she was having an affair with Max and wanted Molly out of the way.

This led to all sorts of farcical scenes, as you can probably imagine, and was great fun to write – as well as proving that you can find inspiration anywhere!

To be honest, my average writing day is the most shambolic mess you’ve probably ever heard of, and it’s quite embarrassing to have to confess how ludicrous it has become over the last year in particular! I’ve been a raging insomniac for years, anyway, but that’s getting worse, and I also find it difficult to write creatively until it’s quite late at night. As a result, my “average” writing day goes something like this:

Noon: Wake up, feeling (and looking) like death. Drink vast quantities of tea, while responding to all emails, tweets and messages via social media. (This takes hours as I get so many.)

4:30pm: Sit around fretting about why I haven’t started writing yet. Find lots of other “more important” things to do, like putting suede restorer on all my shoes and boots, reading my entire Twitter timeline and trying to explain how Facebook works to my mother (for the umpteenth time).

6pm: Husband and son both arrive home from work. Sit around telling them how worried I am about how much work I’ve got to do and how I haven’t managed to do any of it yet. Ignore conspicuous raising of their eyebrows.

7-8pm: Eat properly, courtesy of husband who’s an excellent cook, unlike me.

8-9:30pm: Find good excuse to watch three episodes of Frasier by telling myself it helps my comic timing. Watch one more, just to make sure.

10pm: Approach desk as if it’s about to explode, sit down, groan a lot, then – finally – start to write.

5-6am: Finish work. Write in diary, “Am idiot. Tomorrow, will keep normal hours. Am RIDICULOUS excuse for human being.”

Not really, or none that I’m aware of, anyway. I find most people fascinating, whether famous or not – so I tend to pay careful attention to everyone I meet or spend time with, and then store away interesting details or things they’ve said, like a squirrel collecting nuts. Once I start writing, bits and pieces of those conversations or events just seem to come back to me, though I don’t always recall who or where they originated from by then. They end up being totally unrecognisable, anyway, by the time my imagination’s got to work on them.

Oh, gosh, this is an impossible question to answer as, having done two highly literary degrees and also having read compulsively since I was very young, I’ve read far too many wonderful women’s fiction books to be able to choose just one all-time favourite. Also, what I enjoy tends to change according to my mood.

However, I really love Cheri and The Last of Cheri by Colette, both of which I read for the first time decades ago, but have read again several times since then. I was also blown away by Annie Proulx’s The Shipping News and Kate Atkinson’s wonderful Life After Life and I’m now hooked on Donna Tartt’s The Goldfinch, which I can’t put down. I know it’s cheating not to pick one all-time favourite, but I’m sorry – I just can’t! In terms of chick-lit, though, it has to be the original and still the best: Helen Fielding’s Bridget Jones’s Diary.

This is another tricky one, as I love the work of so many female writers across a wide range of genres. In terms of those whose tone is most directly related to my own work, though, I guess it’d be a toss-up between Dorothy Parker and Fran Lebowitz, both of whom I find hilariously funny.

I tried to learn all the great one-liners in Fran Lebowitz’s Metropolitan Life when I was a teenager, so I could pass them off as my own to impress boys I fancied. It didn’t often succeed, but that was probably more my fault than Fran’s.

I’m also inspired by late-blooming novelists such as Mary Wesley (of whom more later), and I admire Sue Townsend a lot, both for her fortitude in the face of illness and disability, and for her unfailing wit.

I’m not sure I have anything as organised as a “process” or a plan, though I wish I did! For me, it all starts with the characters, and I often have only a vague idea of where I might like their individual stories to start and finish. Even when I do have a plan, I’ll still change direction if I decide that a particular character wouldn’t do the thing I’d originally intended him or her to do.

As for drafts, I honestly have no idea how many I produce, as I edit so compulsively – both as I write and afterwards, so even before my manuscript gets anywhere near my editor, each scene could easily have been edited between thirty and fifty times, which is obviously an insane amount. It’s not a very efficient way of working, and I’m hoping to be a lot more organised with the second book, though I rather doubt if I’ll succeed in that. My characters tend to have minds of their own so they make a lot of my decisions for me, and if a sentence doesn’t sound right when I read it aloud, I’ll feel compelled to keep on re-writing it until it does!

Long and tortuous, to put it mildly. I’d wanted to be a writer even as a young child, and eventually studied for a degree in English literature in the hope that it would help me to achieve my ambition, but it had the opposite effect. I felt my writing was so inadequate in comparison to that of the great writers that I was studying that I gave up writing fiction for decades after finishing my course.

It was only when one of the MPs I worked for told me that I should be a novelist rather than ”wasting my talent” writing letters for him, that I decided to go back to college and study for a second degree, this time in Creative Writing.

I worked like mad, and managed to get a First, which was encouraging, and then I began my blog, Mid-Wife Crisis, which went on to be short-listed for the Orwell Prize, which is awarded to work that comes closest to achieving George Orwell’s ambition “to make political writing into an art”. It was really at that point that everything started to happen, and I began to believe I really could become a “proper” writer. The validation that the Orwell Prize shortlisting gave my work helped me to get an agent, and  eventually – after a few false starts – my book proposal found its way to Claire Bord at Avon, who thankfully fell in love with it. The rest, as they say, is history!

That writing is something that you’re driven to do and is something you hate being prevented from doing. I know there genuinely are novelists who feel like that, but many of those I know feel exactly how I do about it: they’d rather do almost anything than write.

It sounds stupid, but I hate the thought of writing, and find it almost impossible to start but, once I finally have, I then tend to get into it gradually, and start to enjoy it a bit more. The thing I really like is having written (something I share with one of my heroines, Dorothy Parker, from whom I stole the phrase). It’s fantastic when someone tells you they love one of your characters or that you made them laugh out loud in a public place, and it’s chasing that feeling that keeps me writing.

It’s never too late to start – which is something I’ve been telling myself for years, mainly thanks to Mary Wesley. Her first adult novel was published when she was 71, and she went on to have ten bestsellers over the following twenty years, so I figured that if she could do it so late in life, then I was still in with a chance myself.

The only downside to following Mary Wesley’s example was that I’m considerably younger than 71, and so it did make me lack any sense of urgency and I wasted a lot of time as a result. On that basis, my advice probably should be to start now, and just get on with it. Writing seems to be like a muscle: it requires regular practice to keep it in shape!

I’m working on the sequel to Diary of an Unsmug Married – or I should be, as my editor’s expecting the manuscript by the end of July. In reality, though, I’ve been so busy in the lead-up to Unsmug’s publication, that I’ve barely had time to work on the sequel at all, so the next few months are going to be a bit frantic, and I’m already waking up in cold sweats at the prospect!