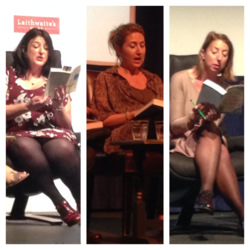 Rowan Coleman, Lisa Jewell and Jenny Colgan doing their readings for the audience.

I've been to some pretty spectacular book events over the years for Novelicious but they tend not last more than a couple of hours. You can imagine my excitement then, when I headed off to Henley for a whole day of bookish delights.

First up was the lunchtime chat with Lisa Jewell, Rowan Coleman and Jenny Colgan, in which they each did a reading and then discussed their experiences both during the writing process and, of course, what comes next once the book is published.

Jenny talked about the use of recipes in her recent book series and how living in France had made her really aware of the different approaches children have to food there and here in the UK. She laughed that there just isn't a word in French for packed lunch, the concept is so alien to them. They are more curious about food, though she joked that her family do get a little sick of her cooking when she has to try out the recipes over and over…

Rowan, who has written some really beautiful, emotional stories explained that she likes adding humour to the stories so they reflect the reality more. "There's always love and there's always humour," she said. When asked about the story behind her covers Rowan went on to say that she is pretty pushy about hers in general – and then mentioned that her editor was in the audience. As Rowan was showing off the beautiful Richard and Judy sticker on the cover for The Memory Book, Lisa jumped in and exclaimed (in surprise!) "I'm on the cover!", getting a big laugh from the audience.

Lisa was asked about the London setting of her novels and she confessed that the city is "absolutely a part of me". She said that her goal was to work her way from the outskirts to central London and she seems to be doing pretty well!

The three were also asked about how they feel the digital age has affected their writing and whether they are fans of social media. They all agreed that the best thing about it is that they have a community they can turn to when the writing process becomes all too solitary. Rowan, of course, said that she absolutely adores Twitter (just check her feed!) and likes to tweet about dogs as well as writing. Jenny added that "all writers are congenitally nosy" – something to which I think many writers would agree. 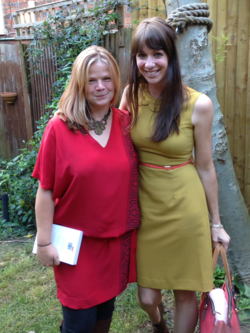 Amanda began the panel with one of the biggest laughs of the night. When asked why she began writing, she said it was essentially to avoid doing laundry. Amanda wasn't all jokes, however, as she did go on to offer some superb advice about writing, talking about the many obstacles that writers face and saying that you just have to keep going and find what works for you.

She also added that you should enjoy the process of writing your first book while it's still only you you're answering to. If you're fortunate enough to reach a second book, you suddenly have a lot more people to answer to – and deadlines!

Cesca left the audience members (and the other panelists!) with their jaws on the floor as she confessed to the sheer amount of words she manages to get written. However, she did explain that writers' block doesn't really bother her largely because she has realised nobody is going to ever love the first draft.

Abbie Ross painted a really vivid picture of her childhood – the subject of her memoir – complete with a neighbour who taped her hair into place (and was apparently only too willing to confess that she was the woman from the book at book events!).

Fortunately, the weather in Henley on Friday was absolutely stunning and with these great speakers out to inspire, entertain and encourage their audiences, it really was a superb day. All the authors I saw over the course of the day clearly lead incredibly busy lives but they somehow manage to fit writing in – and we're so very grateful they do.

Keep up the great work ladies!

Thanks to all those who worked behind the scenes too making sure everything went smoothly.

Roll on next year!