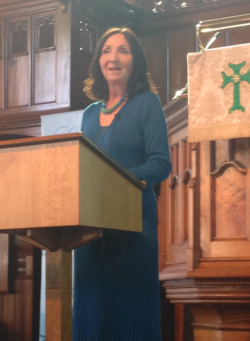 Another year, another opportunity to head to the lovely Henley-on-sea for more literary goodness. Day one of the festival boasted gorgeous weather and some big names to kick things off in style.

First up was the sellout talk by Jane Hawking. Hawking's memoir Travelling to Infinity was what inspired the film The Theory of Everything (which starred Eddie Redmayne and Felicity Jones) and Jane was incredibly honest and open about how it felt to have her life, and that of her family, adapted into a film.

On seeing Redmayne portray her ex-husband, Jane said: 'I went in to … watch the filming and there was Stephen coming towards me. I was astounded … I had travelled backwards in time.' On seeing Jones portray herself on the big screen, Jane said it was an 'out of body experience, unnerving but very moving.'

Making the most of the sunshine, it was next time for River Readings, which involved an hour-long boat trip while four brilliant actors read and performed poetry, book excerpts and other quotes. Offerings included a poem by Maya Angelou, writing by Roald Dahl and an excerpt from Wind in the Willows.

The readings were a great mixture of light humour and sincere emotion and, against the Henley backdrop, made for a beautiful outing. 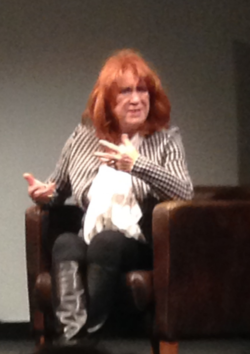 Lynda La Plante rounded off the day with a passionate, fascinating (and often bonkers!) Q&A, in which she discussed her career in both novel and TV writing and the extensive research she has undergone over the years.

Her new book, Tennison, tells the story of Jane Tennison before she became the character we all know and love. Where did Tennison's career begin? What were things like for her back in the 70s?

As if writing the novel is not enough, La Plante is currently adapting it for TV and is determined that an unknown actress should play the lead.

She also, in a rather self-deprecating and hilarious manner, took the time to remind the audience that her new book is one hell of a page-turner, getting big laughs every time (when the jokes are good, they don't get old!).

La Plante is passionate about the importance of telling the story of the victims, not just the criminals. She is firm in her belief that all sides should be told in order to not glamourise a criminal lifestyle.

'To me, the most important part of my research is to be able to give some indication of what a victim goes through. That's where my heart is.'

Whatever motivates you, just keep doing what you're doing!

Thank you Henley for a great day!