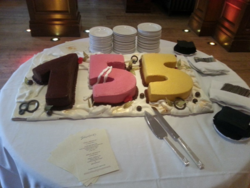 I arrived at the Park Plaza Sherlock Holmes in London at 5.30pm for the exclusive Sherlock Holmes-themed afternoon tea, where I was duly escorted to my comfy leather chair and enjoyed first class care and attention. The dining room was shared only by a pair of well-to-do ladies, one of whom was sporting a magnificent hat (I later learned she was the wife of one of the Sherlockian authors present that evening, no wonder their conversational topics spanned from the Romanov dynasty to Einstein – yes I was eavesdropping).

During my afternoon of sandwich nibbling and gin swigging, Maria, the PR Executive of Europe, Middle East & Africa for Park Plaza Hotels came over and introduced herself before talking me through my sandwiches. The afternoon tea had been designed by the Park Plaza kitchen team, who were keen to bring alive the spirit of the Victorian period. Tier one included cheddar and pickle, roast beef and horseradish, smoked salmon and lemon cream and cucumber and dill sandwiches while tier two consisted of plain and fruit scones (oh glorious scones!) with clotted cream. I saved tier three for last, which boasted Pimms and strawberry cheesecake, lemon and poppy seed sponge, treacle tart and a Victoria sponge. A highly recommended afternoon treat, if you ask me. While I munched, Maria also introduced me to Steve Emecz, the lead man at MX Publishing, who was responsible for much of the evening’s talent.

In Steve’s capable hands, I was taken on a whirlwind tour of Sherlock Holmes and Sir Arthur Conan Doyle. Being the UK’s leading Victorian literature publishers, MX Publishing has provided a lending library of a number of its author catalogue to the Park Plaza spanning Sherlock Holmes inspired graphic novels to the more fantastical outings of Doyle’s fans.

By 6.30pm the evening proper was beginning and the room was filling up fast with fans, authors and members of the Undershaw Preservation Trust – Sir Arthur Conan Doyle’s former home – mingling around one another. After my afternoon tea I wasn’t sure I could cope with canapés, that was until they came out and I realised what they were – mini fish and chips? Yes, please. Croque Monsieur with a quail egg? Why the devil not? All washed down with a Scandal in Bohemia gin martini … or three.

No birthday would have been complete without a rousing rendition of the birthday song attributed to ‘Sir Arthur,’ not Arty as I would like to believe he would have preferred. The cake, a magnificent feat of baking by the Park Plaza Sherlock Holmes kitchen and pictured above, was cut and handed out before we were ushered downstairs to commence the theatrical entertainment. 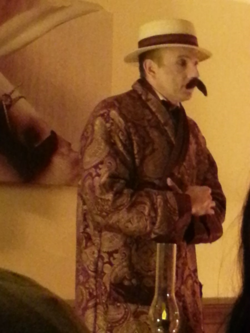 The evening’s performance was brought to the revellers by Don’t Go Into The Cellar, which markets itself as Victorian theatre with bite! The one man show entitled The Singular Exploits of Sherlock Holmes, was acted with tremendous aplomb by the talented Jonathan Goodwin with technical and stage support in the guise of Gary Archer. Throughout the hour-long play, we were treated to the well-known characters of not only Sherlock, but Moriarty, Mycroft and the stealer of scandal Milverton.

The final act of the evening was a Skype link up with a mirror-image party taking place in Florida. This allowed us to get involved with a live Q&A with bestseller and award-winning author Diane about her latest novel The Conan Doyle Notes – The Secret of Jack The Ripper, talking from her world book launch.

Unfortunately, as all best laid plans, when it came to the technology actually working there were a couple of hiccups relating to microphones and videos, however, we did get to hear a little about her latest foray into writing. Although this didn’t contain Sherlock in the novel, his methods and presence within the pages was very much alive and well.

As 9.30pm signalled the end of what was a not so elementary evening (sorry!), it was time to head home. A massive thank you to not only the Park Plaza Sherlock Holmes but also MX Publishing for hosting such a wonderfully entertaining event. Plus with profits going to The National Literacy Trust and The Undershaw Preservation Trust, it was truly a worthwhile evening for all those in attendance.