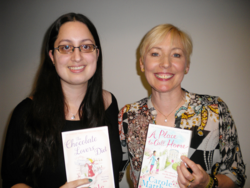 Carole Matthews is probably best known for her Chocolate Lovers' Club books, so what could be more apt than for her to make a special appearance at a festival that is all about the delicious melt-in-the-mouth sweet? As I am addicted to both the cocoa treat and Carole's delightful books, this sounded like a winning combination to me.

Unfortunately, the festival itself was more of a lonely cocoa bean rather than Willy Wonka's chocolate factory and the organisation left a lot to be desired. Thankfully, we soon moved to a private room where we were treated to an intimate reading, a Q&A with the guest of honour and even some fun facts about chocolate. Massive kudos to the incredibly lovely Carole for single handedly making it such a wonderful afternoon despite the odds not being in her favour (oops, wrong franchise).

Carole is an avid reader herself so we easily started talking about all things books. She mentioned that she cannot cope without a book on the go, which is what got her into writing in the first place. Her passion lies with historical novels and she's a particular fan of Philippa Gregory. The reason she doesn't write historical fiction herself, she revealed, is that she is better at the kind of research that involves chocolate, wine and gossip. She also enjoys grisly crime (reading it, that is), though really she'll read anything and everything.

Asked how she decides the topics for her novels, Carole tells a story about a book she wrote which featured opera heavily and for which she ended up seeing three operas a week. Needless to say, by the end of it she never wanted to see an opera ever again. Nowadays, she picks a topic that she won't mind studying for six months. She jokes that she's considered writing a novel titled The Secret Cake Eaters Society, but that the research probably wouldn't be very healthy for her. 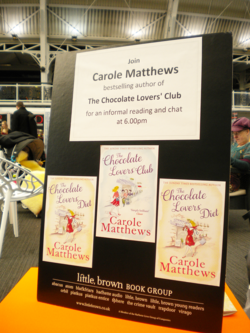 The chocolate idea actually came about when she was having dessert with her editor and talking about a novel she was working on at the time. He said: "Darling, a book about chocolate would sell ten times more". She wanted to feature a group of women in it, like in Sex and the City and Desperate Housewives, and so The Chocolate Lovers' Club was born. She is currently working on the third book in the hugely popular series, titled The Chocolate Lovers' Christmas. Fans will have to be patient though as it's not out until August. Thankfully, she is releasing a Christmas novel this year and another summer title next year to tide us over in the mean time.

Something funny to note is that Carole’s Christmas books get their first release when it's still summer. This is because her novels receive a soft launch as a hardback first – aimed at libraries, export and hardcore fans – followed by a paperback release a few months later, which gets the full publicity campaign. As she has a new seasonal read out each year she is always editing or writing one and glitter starts moving into the house from March onwards! Christmas cannot come early enough for me, so Carole's house doused in glitter and having lots of chocolate dotted around for research sounds pretty amazing to me.

Some of Carole's research for her cocoa-centric books sounded amazing, such as visits to Cadbury World and a tour across America, and had me seriously considering writing a book about chocolate myself. Other anecdotes, meanwhile, made me shudder at the mere thought and wonder why anyone would ruin a good piece of chocolate like that. She has, for instance, eaten chocolate ants and chocolate made from beans that have passed through the digestive system of a weasel. Weasel poop aside, all this research into the sweet treat has turned Carole into a self-confessed chocolate anorak. 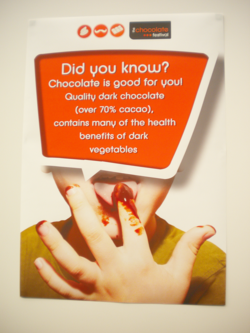 Not only did we listen to Carole's hilarious readings and hear all about her writing process, but she also treated us to some chocolate fun facts throughout the event. Here are a few that are too good not to share:

Did you know the Aztecs considered chocolate such an aphrodisiac that women weren't allowed to touch it? It’s true. Chocolate also stimulates the release of endorphins in your body, making you feel happy. (This is true. We were surrounded by chocolate during this event and giggling like mad. I'm definitely blaming the sweet treat for that and not my mental state.) Oh, and the blood in the famous shower scene in Alfred Hitchcock’s Psycho? It was actually – you guessed it – chocolate. Finally, 50% of women say they prefer chocolate over sex (Carole commented that this couldn't possibly be correct and must be a much higher percentage). Ahem.

Don't say we never teach you anything, book nerds!

Carole Matthews' latest novel, A Place to Call Home, was published on 10 April.