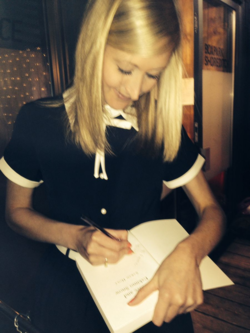 Reading and eating kind of epitomise two of my favourite things in life. So if you combine the two, you pretty much have me hook, line and sinker.

Which is why I (literally) jumped for joy when I found out I was going to attend the (seemly first ever in the UK) edible book launch at the achingly cool Boxpark in Shoreditch.

Sponsored by web hosting company UK2 as part of its ongoing campaign to support emerging talent, the event was in aid of Sarah Holt’s debut novel, Love and Eskimo Snow, an inverted Cinderella story about the nature of love and the possibility of loving more than one person at a time.

Now, the very concept of an edible book launch caused much confusion amongst my circle of friends. Many imagined me taking a trip to London to munch on the paper pages of a novel.

But no, this event had real food. Delicious food. Eye-wateringly beautiful food. Conversation starting food. Food that mirrored the story of Love and Eskimo Snow.

Every course (there were four in total with cocktails) depicted a passage of the book.

To portray the accident at the beginning of the book we were presented with cured salmon on a bed of lemon snow, with a pine sphere and pine hash.

The first meeting of the couples in the book was mimicked with a cocktail – sechuan button infused vodka with tangy grapefruit and lemon, topped with a dissolve sugar pearl.

The passage regaling the couples first use of the ‘L’ world each had its own tartare – beef, carrot or beetroot.

The discovery of a diary, meanwhile, was toasted with an interactive cocktail complete with popping candy.

And finally the close of the book, Eskimo Snow, was presented as a red dessert of roquefort with beetroot, guava and raspberry.

Each extract was read aloud by Sarah Holt herself, with just the right amount of suspense to intrigue and keep us guessing, without sharing any spoilers. 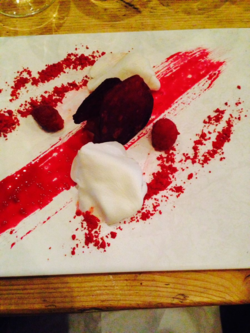 Every course that was put in front of us delighted. Of course, some enjoyed particular courses more than others, but what was particularly great about this concept for a book launch was that each course and the proceeding extracts served as conversation starters around the table – not just amongst the people you came with, but all of those sitting nearby began excitedly talking about how the food in front of us translated to the words we heard coming from the pages.

Not only did I adore the concept of Edible Stories (I am already hatching plans to go to another of their events) but it certainly whet my appetite for Love and Eskimo Snow, too. I can’t wait to get lost in the worlds’ of Missy, Claire, and Elizabeth to learn more about their different experiences of love.

Love and Eskimo Snow by Sarah Holt is out now.