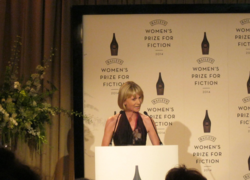 Earlier this week, having changed into a dress that had been gathering dust in the back of my wardrobe in the work toilets, I headed down to Southbank for the Bailey’s Women’s Prize for Fiction – with a few missions already planned for the evening ahead.

With my missions decided, it was time to go. I walked in and was greeted with numerous people, cocktails and books – some even hanging over the bar! I picked up the first Baileys I saw and surveyed the room. It suddenly dawned on me that I recognised absolutely nobody. I was on my own and everyone in the room just seemed to know each other.

As I stood there sipping the rather luscious Baileys, I started to look around the room for just one familiar face. And then one face started walking towards me. Viv Bird, Chief Executive at Booktrust, approached and told me she just thought she’d say hi because she saw me on my own. Turns out, we had one of the most fascinating chats of the night as she told me all about the great work done by Booktrust and our mutual belief that reading from a young age is just so important!

By the time I reached my second glass of Baileys (easy now challenge 4!), I had spotted Hannah Kent – or at least who I thought was perhaps Hannah Kent (see challenge 5!). I stepped closer, listening in as someone praised her writing. I heard ‘Burial Rites’ and thought 'YES! It is her!' Ready to swoop in and say hi, Hannah was then whisked away as the award was about to begin. Oh well, I thought, I’ll get her afterwards. 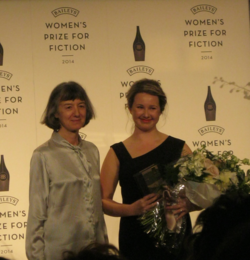 As the awards began, it was a chance for Kate Mosse to begin proceedings and the speakers who followed were all clearly so devoted to their shared cause – the celebration of great writing by women. The award itself was a fun affair, with voiceover provided by the lovely (though I didn’t know that at the time!) Opal Bonfante. After the introductions and the announcement of the winner of the Grazia first chapter competition, each of the six nominees for Bailey’s Women’s Prize for Fiction – Hannah Kent, Eimear McBride, Chimamanda Ngozi Adichie, Jhumpa Lahiri, Donna Tartt (her agent represented her) and Audrey Magee – were invited up on stage and handed a beautiful bunch of flowers. Then it was time for the award itself.

When Helen Fraser, chair of judges, announced that Eimear McBride was the winner, there was a deafening cheer and applause – though I soon discovered that was largely because I happened to be standing behind her rather vocal cheerleading squad. In her speech, McBride said: "It's a really wonderful thing to have my book recognised in this way and I hope that it will serve as an incentive to publishers everywhere to take a look at difficult books and to think again". She concluded by saying: "To win the Women's Prize is particularly wonderful because to be a woman is a very fearless thing these days". 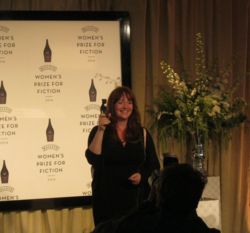 Eimear McBride with her trophy

After the award part of the night was concluded, it was Annie Nightingale MBE’s turn to take centre stage as the music began and the drinks flowed. I met Opal quite soon afterwards and we set about trying to meet as many fabulous authors and book types as we could, perfecting the art of 'swooping'. I managed to nab a quick photo with the shortlisted Chimamanda before she was whisked away, but struggled to track down Hannah Kent who had potentially already left! I didn’t see her again for the rest of the night (challenge fail!).

For those who don’t know me very well, I love both books and films (hence my Twitter handle @filmvsbook), so when I finally spotted author Jojo Moyes talking to agent Felicity Blunt and actress Hayley Atwell, alarm bells started ringing in my head. Had they found their Lou for the book’s adaptation? Turns out – no. But I can totally see Atwell rocking those bumble-bee tights! Jojo was an absolute pleasure to talk to. She told me that she couldn’t quite believe the difference to her life Me Before You has caused. People queue up to talk to her – something she says she is unlikely to ever get used to. 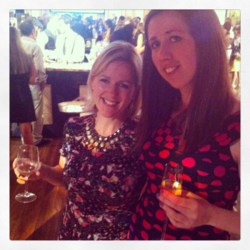 Having finally allowed Jojo to speak to somebody other than me (challenge 1 success!), I spotted Novelicious favourite Jenny Colgan wandering by and quite literally grabbed her to say hello! Jenny was gracious enough to thank the Novelicious team for our support and was happy to take a quick snap, but then dashed off to track down Lisa Jewell who I’m told was also around somewhere…

Next up was the incredible pairing of Kathy Lette and Joanna Trollope, both an absolute delight to meet. Kathy especially was very excited to tell me about her new book Courting Trouble, out in August. "What I've concocted is London's first mother-daughter, barrister-solicitor, two-person, boutique feminist law firm – where they only do women's cases and women's causes," she told me, adding that "they're funny but also pack a punch." Sounds great!

I then managed to very briefly say hello to Helen Fielding, almost wishing I’d worn my Bridget Jones pants after all – though that might perhaps have been just a smidgen awkward! We were also terrible at tracking down Sophie Kinsella. At one point, Opal and I just kept pointing out women who were wearing the same orange she had on – even if they were half her height and blonde. 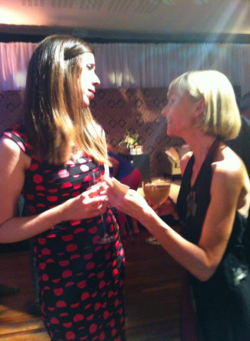 Trying to get a quick hello with Kate Mosse (hello challenge 3!) proved incredibly difficult! It seemed that every time I got near her, she fled in the opposite direction. I tried not to take it personally, but after the third time I thought perhaps it wasn’t going to happen. I had visions of me running after her calling out "Kate! Kate! Come back!" As it happens, I did manage to grab her for all of about ten seconds before a young gentleman came and whisked her away. Oh well, it was long enough at least to tell her thanks for the invite. She told me that the work Novelicious does is so in sync with that of the award that it was only right we join in the fun. Novelicious certainly has a fan there!

Ultimately, everyone there was so just so pleased to be celebrating such a talented group of writers, old and new, to be celebrating the very best of female authors. It didn’t matter if you were a journalist, an author, a publisher, agent or just a relative or friend. It really all just came back to great books by great women – and that’s the important thing!

Thank you Baileys and all those involved with the award. It really was a spectacular night. Now please tell us how you created that incredible book light over the bar. I want one!

For the full photo album check out the Novelicious Facebook page.