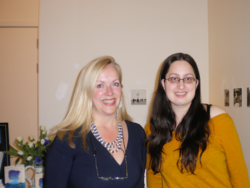 One of the most exciting perks to being a book reviewer, besides reading lots and lots of amazing new novels, is being invited to all sorts of inspiring literary events. Often this means getting the chance to meet the author and publishing team, and sometimes even rubbing shoulders with a celebrity who looks oh so familiar – even if you can't quite figure out who they are.

Last week I attended the launch for Isabel Wolff's mesmerising new novel Ghostwritten, which delves into the harrowing story of a Dutch woman who lived in Java during the Japanese Empire's occupation in the 1940s. The launch was at the Free Word Centre in London and despite having worked around the corner for years and the building having a colour-popping Kermit the Frog green exterior, I never even realised it was there. As a centre for literature, literacy and free expression it was a very fitting venue for the event though and one I'll now certainly be keeping a closer eye on.

Some people are fashionably late; I'm usually unfashionably early. Being one of the first ones to arrive did mean we bagged some comfy seats on the couch and had the chance to chat to the guest of honour before she was swept away by other invitees congratulating her on the publication of her novel. Isabel was absolutely lovely and a delight to talk to as we asked her about the story behind Ghostwritten. And, the proper book geeks that we are, we even got our photo taken with her. 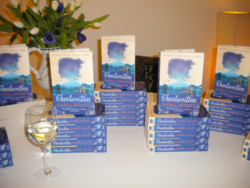 While enjoying a nice glass of red wine (okay, two glasses) we met Jaime Frost, a publicist at HarperCollins who we may have slightly interrogated about her fab job. She was lovely about it though and happily answered our many questions. Jaime also spoke about some of the exciting novels she's currently working on and from the sound of it there are some great things in the works for HarperCollins.

Midway through the evening Isabel held a speech thanking some of the people who had been of great help during the process of writing her latest novel. She also read an intriguing passage from the story and even though I was already interested in the book before I attended the launch, her gripping reading ensured it went straight to the top of my to-read list.

During the reading I was standing behind a glamorous woman who looked incredibly familiar, but even though friend and I racked our brains to figure out who the mysterious blonde was, we both clearly failed at celeb spotting. Thankfully Jaime messaged the next day, preventing many sleepless nights I'm sure, and revealed it was none other than Helen Lederer of Absolutely Fabulous fame – very befitting for what was a fabulous evening!

We had an absolutely lovely time at the launch. Many thanks to Isabel Wolff for the kind invite. Ghostwritten, her tenth novel, is out now.