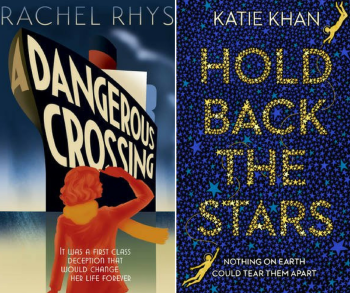 One of the most exciting things about reviewing books, is getting the chance to discover new voices long before they go mainstream. Can you imagine reading award-winning novels such as The Miniaturist by Jessie Burton and The Unlikely Pilgrimage of Harold Fry by Rachel Joyce before these authors are widely known to the public? It's a real privilege.

This is why I love reading debuts, especially discovering a gem that I know will become one of the most-talked about books of the year. And one publisher that has done exceptionally well in that regard is Transworld (part of Penguin Random House). With award-winning novels such as Disclaimer, Before I Go to Sleep and I am Pilgrim, they ensure that their debut authors go straight to the top of my most-anticipated books list.

So I was thrilled to join the Transworld team at the Charlotte Street Hotel in central London this month for a showcase of some of their 2017 debut authors. They described the evening as 'introducing new voices destined for major success', and after listening to the authors reading from their debut novels, and answering questions about their work and writing process, I couldn't agree more.

The titles from the Showcase I'm most excited for are Hold Back the Stars by Katie Khan (26 January 2017), A Dangerous Crossing by Rachel Rhys (6 April 2017) and The Things We Thought We Knew by Mahsuda Snaith (15 June 2017).

Hold Back the Stars is a high concept love story that sounds really, really cool. Set in a post-Brexit, post-US election world it was intended as fiction, though Katie joked during the Q&A that with recent happenings in the world it's now non-fiction. The book is being described as One Day meets The Versions of Us meets Gravity.

A Dangerous Crossing is a historical thriller set on the journey from the UK to Australia back in 1939. While it sounds like a classic Agatha Christie (two passengers turn up dead, everyone's a suspect), it's actually based on a true story. Also, fun fact, 'Rachel Rhys' might be a debut author, but it's a pseudonym for well-known writer Tamar Cohen. She shared a great writing tip during the Q&A too: "Every writer has self-doubt, you have to grit your teeth and power through it."

The Things We Thought We Knew is a set on a council estate with a main character plagued by chronic pain syndrome. It sounds heavy, but Mahsuda's reading was funny and she told us that she wanted to show what living on a council estate was really like, drawing from her own experience. While Mahsuda is already an award-winning short story writer, this is her first full-length novel. She originally wrote it when she was 16 and she loved it so much that she went back to it to rewrite it.

These are three very different debut novels, but each with fresh female voices at the helm. We're certain these are authors we'll hear a lot more of in the new year, and we can't wait!

What are your most anticipated debuts for 2017?