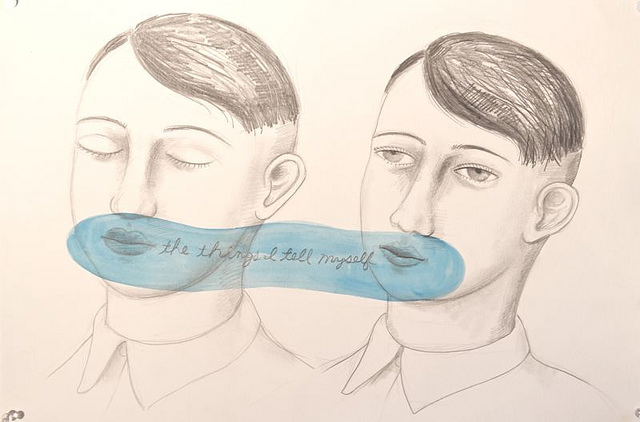 In fiction, internal dialogue represents what the character is thinking. However, it shouldn’t be confused with narration. The writer narrates the story through first, third, or omniscient point of view, but the internal dialogue shows the character’s inner thoughts. Formatting the character’s inner thoughts can be tricky, and many writers do it differently. You can use quotation marks, though they are also used to represent active dialogue between two or more characters. You can also use dialogue tags, italics, or neither.

As stated above, quotation marks are used to show dialogue, and can confuse the reader if they are also used to show a character’s inner dialogue. However, if your character is alone, but thinking out loud, it’s perfectly okay to use them, because the character actually says those words out loud, instead of just thinking them.

2. A combination of italics and dialogue tags

This method is highly useful when writing in third person point of view. By writing the inner dialogue in italics and then punctuating them with dialogue tags, the reader won’t get confused and will be certain that what they are reading is not spoken dialogue between two characters:

Regina looked at Mauro and Mel. I should have known she’s not his cousin, she thought. They look nothing alike.

It’s important to note that there is no need to write she thought to herself in the example above, because the reader already knows that these are the character’s own thoughts. The only exception would be if you’re writing science fiction, where people can communicate telepathically.

This formatting method is highly useful once you’ve made clear which character you are using as a viewpoint. Once the reader knows whose thoughts they are following, the use of dialogue tags becomes redundant:

Regina looked at Mauro and Mel. I should have known she’s not his cousin. She took in Mauro’s brown hair and eyes and compared them to Mel’s blonde hair and blue eyes. They look nothing alike.

Here, the reader knows that what’s written in italics is the character’s inner dialogue, as if she is speaking to herself, even though there are no dialogue tags. The tense changes from past to present, and she transforms to I, since inner dialogue should be treated the same as normal, spoken dialogue.

4. Don’t use italics at all

When you are using a first person narration or deep point of view in third person narration, you can write inner dialogue and internal thoughts without using italics or dialogue tags. The reader is already deep inside the point of view’s mind, and knows the character’s thoughts and feels their emotions as his/her own. That’s why you don’t have to use italics to highlight the character’s inner dialogue and thoughts:

Regina looked at Mauro and Mel, standing there, holding hands. She should have known Mel wasn’t his cousin. She took in Mauro’s brown hair and eyes and compared them to Mel’s blonde hair and blue eyes. They looked nothing alike.

In the example above, there is no doubt that Regina is the one thinking those words to herself. We can also use the same method when writing in first-person narration:

I looked at Mauro and Mel, standing there, holding hands. I should have known Mel wasn’t his cousin. I took in Mauro’s brown hair and eyes and compared them to Mel’s blonde hair and blue eyes. They looked nothing alike.

While it’s not a rule, it is still preferable to use only one method of formatting inner dialogue. This helps the readers get more into the story, while constantly changing the formatting method can confuse and distract them.

Image credit: Rick&Brenda Beerhorst on flickr and reproduced under Creative Commons 2.0[author] [author_image timthumb=’on’]https://writingtipsoasis.com/wp-content/uploads/2014/12/photo.jpg[/author_image] [author_info]Georgina Roy wants to live in a world filled with magic.
As a 22-year-old art student, she’s moonlighting as a writer and is content to fill notebooks and sketchbooks with magical creatures and amazing new worlds. When she is not at school, or scribbling away in a notebook, you can usually find her curled up, reading a good urban fantasy novel, or writing on her laptop, trying to create her own.
[/author_info] [/author]