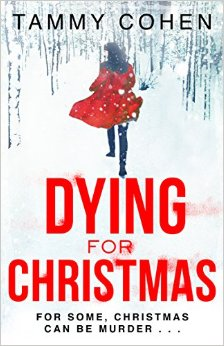 I know we're only in October but I'm aware that many people – myself included – like to read festive novels in the run up to Christmas whilst the weather is getting colder and you're as snug as anything inside. And some Christmas novels have already been published with more set to be published over the coming weeks. Here are five books that are on my must-read list.

We'll bring you more over the coming weeks.

1. Dying for Christmas by Tammy Cohen – I love the sound of this one. A psychological suspense novel, described as a 'yuletide chiller', this is about a young woman being held captive over the twelve days of Christmas. But there is a secret. All is not what it seems. Published 20 November.

2. The Great Christmas Knit Off by Alexandra Brown – I am really looking forward to snuggling up by the fire with this one. Sybil has been jilted at the altar and is heartbroken. Knitting has been her saviour and she has filled her home with tea cosies, bobble hats and jumpers. But, after trouble at work, Sybil decides to flee, so she runs away to Tindledale where Christmas miracles happen…Published 6 November.

3. Christmas in the Snow by Karen Swan – Allegra Fisher is pitching for the biggest deal of her career. Failure is not an option. She meets Sam, a very attractive man, who turns out to be competing against her in the bid. Then a mountain hut is discovered after 60 years. But what does this have to do with Allegra?

4. It Must Have Been the Mistletoe by Judy Astley – Thea's parents are about to split up. Even so, they've decided to host a family Christmas by the sea. Thea herself is newly single. Food, drink and bracing walks with parents on the verge of splitting up – what could go wrong? Oh yes, the new partners might just turn up …

5. The Christmas Party by Carole Matthews – Carole Matthews has recently celebrated the publication of her 25th book (congratulations on writing 25 whole books, Carole!), which is this, The Christmas Party. Louise, a single mum, works for a huge international firm. She doesn't have time for romance until she meets Josh, the rising star at the same firm. Louise decides to attend the Christmas party for one and let her hair down. The only thing is, others are using the party for their own dangerous games.

What Christmas books are you looking forward to this year?