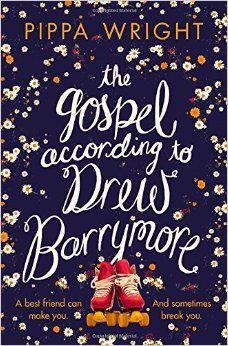 Books with a film star mentioned in the title are immediately eye-catching and memorable. So when I saw The Gospel According to Drew Barrymore (you know, kick-ass Drew Barrymore from Charlie's Angels or the girl-power, tough roller-skater of Whip It?), I knew I had to read it. Even though I know it is not really about her, it gives you a sense of what the book is going to be like … which got me wondering about other books with Hollywood stars in the title. This is what we came up with.

1. The Gospel According to Drew Barrymore by Pippa Wright – A novel about friendship, specifically Esther and Laura's friendship, who have been best friends since they were seven and are still close. Then Esther learns that Laura has gone missing. She drops everything to fly to San Francisco to try and find her. All she has is an email saying: "I'm channeling Drew Barrymore, as ever. The Gospel, right?"

2. The Meryl Streep Movie Club by Mia March – The Three Captains is a bijou guesthouse owned by Lolly. It is where her daughter, Kat, and nieces, Isabel and June, were brought up. The women spend their first summer together in years and attend Lolly's movie night, where they discover things that shake them to their core.

3. A Night in With Audrey Hepburn by Lucy Holliday – Libby is unlucky in love and a failed actress. After a terrible day on set she settles down once more to watch Breakfast at Tiffany's. She's a little shocked when, this time, she finds Audrey Hepburn sitting right next to her. Audrey gives Libby advice and she sets about turning her life around. Out in May this year.

4. Looking for Andrew McCarthy by Jenny Colgan – Ellie's life has not turned out like Pretty in Pink or St Elmo's Fire. Life isn't glamorous at all. Instead she has a horrible flat and horrible relationships. What happened to Andrew McCarthy? Surely he can help Ellie with her turning-30-angst? So Ellie sets out to find him…

5. The Doris Day Vintage Film Club by Fiona Harper – Claire has been watching Doris Day films since she was a child and it has influenced her entire life. She was desperate for a life like the one she saw on the screen. After all, it was sunny, colourful and the male interest was always chiselled. Sadly, Claire's life isn't anything like Doris's. Then she meets Nic…

Other books with a Hollywood star in the title include I Will Marry George Clooney (by Christmas) by Tracy Bloom and Finding Colin Firth by Mia March. Can you think of any more?