As huge Agatha Christie fans, we sent Helen off on a literary tour of the author’s Torquay recently. Today, Helen takes us on a part one of her journey through the landmarks (and even the crime writer’s own home), which were used as creepy, murderous backdrops in her numerous books and tv adaptations. 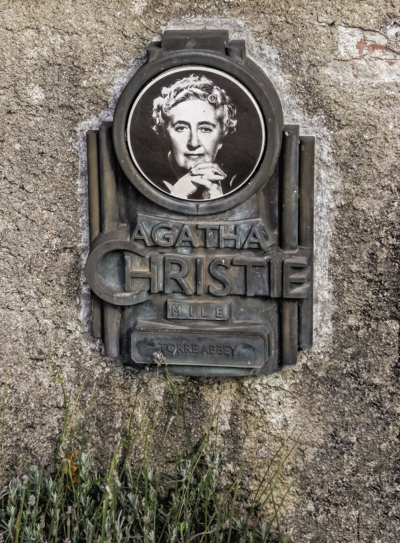 "Poirot was directed to a winding path that led along the wood with glimpses of the river below. The path descended gradually until it came out at last on an open space, round in shape, with a low battlemented parapet. On the parapet Mrs.Oliver was sitting."

Agatha Christie has written over 80 novels and plays and more than 20 of these books were inspired by the South Devon landscape and landmarks. So, it is little wonder that South Devon, specifically the English Riviera, is so geared up to allow you to follow in this famous writer's footsteps.

Agatha has a long history with the area. Born Agatha Miller in Torquay in 1890, she grew up in a house called Ashfield, sadly no longer there, and as a child and young woman would rollerskate down Princess Pier, go bathing in the sea and listen to concerts at The Pavillion amongst many other things. She would work, during the First World War, in a hospital – the building is still there – then later in the pharmacy, where she gained a good knowledge of drugs and poisons and the idea for her first novel about a certain Belgian detective. Later in her life she bought a holiday home called Greenway, a white Georgian house with woods sweeping down to the River Dart below.

Our trip to Agatha's English Riviera started in Torquay with The Grand Hotel. Part of the Agatha Christie Mile, a gentle walk which takes in the landmarks associated with the author, The Grand Hotel is the very hotel in which Agatha and first husband, Archie Christie, spent their honeymoon. The view of the bay and Torquay from the Compass Bar in the hotel was wonderful and you could see why Agatha enjoyed the locale and was inspired to use Torquay in her books. 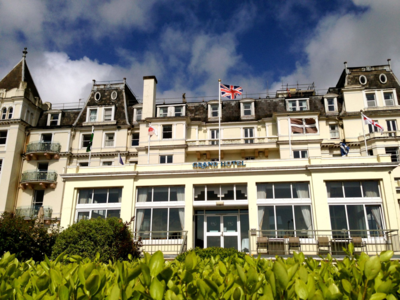 We travelled over to Paignton where we caught the 12.15 steam train to Kingswear – run by The Dartmouth Steam Railway and River Boat Company. This is a stunning 30 minute journey along the coast then inland towards Agatha's holiday home – a journey no doubt taken by the author herself. But as we chugged along, instead of thinking of her, I was thinking of Poirot. We decided to pay a £1.50 supplement to travel in the observation car, called The Devon Belle. It had a wonderful view, with cosy armchair type seats and I'd like to think Poirot himself would have chosen to travel this way had he had the option when he visited Churston, location for the third murder in the A.B.C Murders. Churston is the stop just before Greenway. We didn't get out at Greenway, however, as we were taking a circular route, going on towards Kingswear.

Once in Kingswear we took the passenger ferry over to Dartmouth, stopped for wonderful fish and chips, then caught the Christie Belle – a ferry taking us back up the river towards Greenway, now owned by the National Trust. After passing the Royal Navy College on the left, Agatha's house, high up on the right, came into view. As did the boathouse below, the scene of a murder in Dead Man's Folly, which they also used in the ITV adaptation last year. It was a wonderful sight. 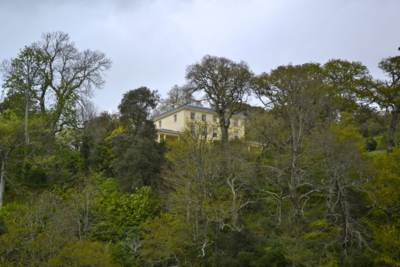 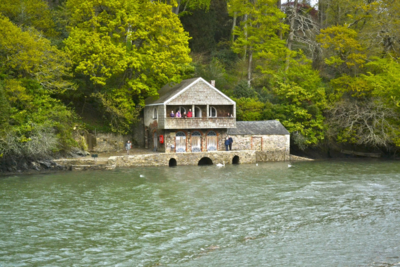 We alighted at a pier, travelled up the steep hill, through big gates "and along a drive, winding up finally in front of a big white Georgian House looking out over the river." Just as Poirot did, when he was summoned there by Ariadne Oliver in Dead Man's Folly.

It was strange, walking through the stable area, which now houses a cafe, toilets and a National Trust shop, to think of this as the home, albeit the holiday home, of the great crime writer herself. Apparently she didn't actually write here, but would come once her current book was complete for a break.

Her house was beautiful. A hallway (apparently the trunk housed there is the one from the novel The Body In The Library), a rather perfect place to overhear private telephone conversations, I thought. Then there is a lounge, cosy despite the high ceilings. In here were the property details from when Agatha and her second husband, Max Mallowan, bought the small estate. After looking at those, we were led on up the stairs and into Agatha's bedroom. Fascinating as it was, I got the sense the writer would not have wanted us in there; the clothes on display in the wardrobe felt rather too intimate. I didn't stay in her bedroom long, but I could not get enough of the grounds; the bluebells, wild garlic and magnolias were all out in force. It was a stunning spring display.

We followed in Poirot's footsteps, again, and went down the winding path towards the river (I wish I'd had his cane!), where we came to the boathouse and the highlight of our visit. It is in this boathouse, in Dead Man's Folly, that a body was found. It is also in this boathouse that a chair specially made for Agatha resides. Of course, I sat in it and pretended to be the great writer and my husband got to play the dead body on the floor. There were pictures of David Suchet as Poirot on the walls, too, which made for a fascinating insight into the TV film, as well as the book and the writer.

We also walked a little further along towards the Battery – mentioned in both the book and used in the film – and I sat on the low battlement just as Zoe Wanamaker did as Ariadne. This is also where the Ariadne of the book sat, standing up quickly as Poirot approached, apples tumbling from her lap. 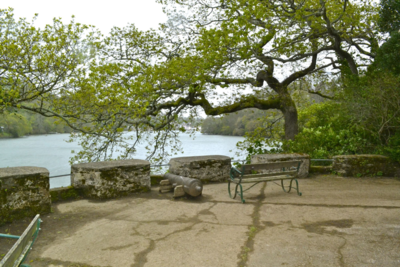 The grounds were very atmospheric. I could absolutely see why Agatha based one of her books there. The way the river lapped at the banks, you almost expected a body to be floating amongst the debris and dead leaves – thank goodness we didn't. I prefer that sort of thing to stay in the books.

Want more? You can actually stay in a National Trust cottage in the grounds of Greenway (just be sure to lock your door at night!).

Next week, Helen will continue her Agatha Christie travels in the English Riviera with a vintage bus tour and explorations around various covert coves and caverns. Join us!