Editor Kerry spends much of her free time travelling to literary locations that have inspired or appeared in beloved books. Here, she takes us (and her poor husband) on a tour of the locations that appeared in the film adaptation of The Notebook by Nicholas Sparks. 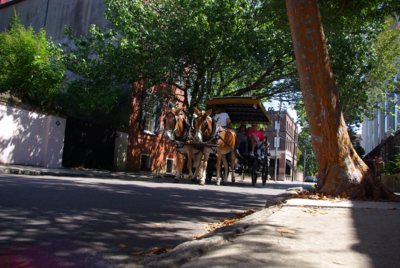 Walking around the historic southern city of Charleston in South Carolina, you’d swear you were on a film set. Horse-drawn carriages passing centuries-old mansions with their magnolia-filled gardens and flickering gas lamps – nowhere can be that magical in real life, right?

I’m a big fan of cultural travel (architecture, museums, food – I love it all), but I had a very particular reason for visiting Charleston earlier this year. You see, while Charleston really is pretty as a picture in real life, it was also the film set for the movie adaptation of one my favourite romantic books of all time. Yes, I’m talking about The Notebook by Nicholas Sparks.

Starring Rachel McAdams and object of my affection Ryan ‘Hey Girl’ Gosling, there’s barely a woman alive who hasn’t dreamt of starring in her own version of this modern classic. It's the quintessential weepy chick flick – a young couple with differing circumstances fall in love in the 1940s only to be separated by well-meaning parents …

Wait, your eyes have glazed over. You're thinking about the kissing the rain scene right now, aren’t you? It’s okay, I’ll wait. Back? Excellent timing. I was just about to explain that, with so many of the film’s iconic locations open to the public, you really can recreate Allie and Noah’s love story. As my poor husband recently discovered.

With the film set to celebrate its 10th anniversary in just a couple of months, join me on a little Tuesday morning tour of The Notebook in the heart of the USA’s lowcountry. 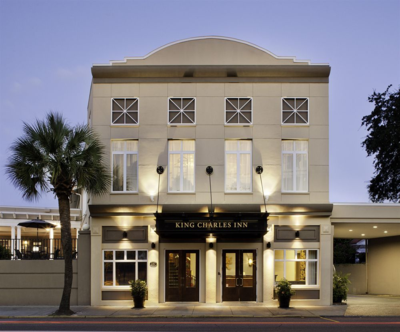 Start your Notebook pilgrimage by checking in to The King Charles Inn at the beating heart of the city’s downtown area. Luxurious and sophisticated while retaining the cozy feel of a traditional inn, the hotel offers a Lights, Camera, Action package, which is the perfect way to start your stay, especially if you're arriving late. With this offer, I slipped into one of the plush bathrobes and lounged around watching the hotel-provided copy of The Notebook over popcorn and candy in my room, before taking a pre-arranged guided walking tour of the city centre’s filming locations bright and early the following morning. Just as a refresher, you know. It had been so long since I'd seen the film. Ahem.

First stop is the old American movie theatre on King’s Street, just behind my hotel. This was the location of Allie and Noah’s first date in the film. A double outing with friends, the young couple soon split off on their own for an evening of getting to know one another. The theatre isn’t in operation anymore, but the owners are very obliging when it comes to lovebirds reenacting scenes from the film out front (speaking from experience). They will also put marriage proposals up in cinematic lights if you call ahead. Hint, hint, boys. 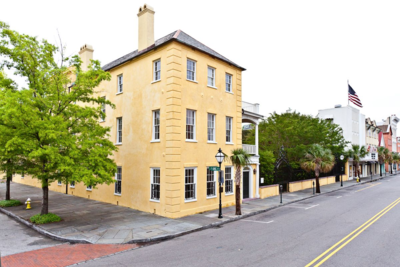 Just up the street, you’ll come to the old traffic lights, which also play a pivotal part in the first date scenes. Noah tells Allie he used to watch the traffic lights change with his father, while lying in the middle of the road. Allie joins him and tells him about her passions before making a mad dash to the sidewalk to avoid a passing car. While I don’t recommend lying in the middle of bustling King Street (my husband very wisely refused) you can recreate the couple’s moonlit first dance, which also took place here, instead. (This one I did coerce him into.) 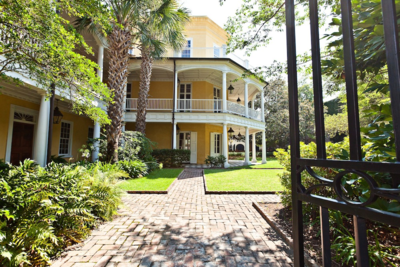 Also on King Street, you’ll find the elegant William Aiken mansion – instantly recognisable thanks to its yellow brick exterior and white-washed verandas. Remember the wedding dress fitting during which Allie spots Noah and his blue-shuttered house in the newspaper? That was filmed here. Her subsequent meltdown in the bathtub also took place at William Aiken House. Girl, get out of that wedding dress and Go To Him. You wouldn’t have to tell me twice. 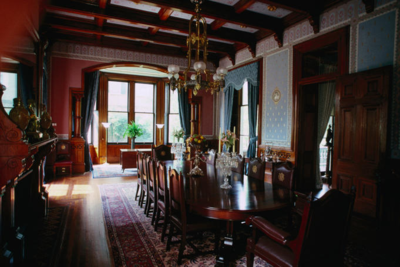 In the film, we know that Allie and her family are only renting a home in Seabrook for the summer. For this, filming was actually split between two properties. The beautiful wood-panelled, antique-laden interior shots were captured at Calhoun Manor at the very bottom of Meeting Street. This is where Ryan Gosling sat* – head in hands and tearful in the parlour – as Allie (aka Rachel McAdams) battled her parents for the right to see him in the adjoining room. The dining room is where Allie learns she and her family will be leaving Seabrook the following morning. It’s okay, Noah. Come to us, we’ll comfort you…

*Caressing the actual chair Ryan Gosling used is strongly discouraged. Not that I tried or anything. Moving on. 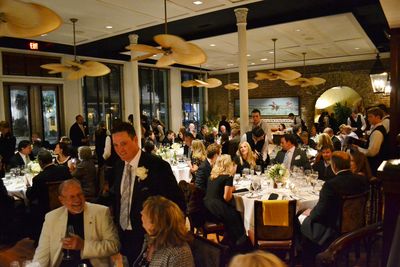 Years later, Noah has built the blue-shuttered house he promised to Allie when they were teenagers (oh, how we wept), and heads to Charleston to find her. While riding a bus through the city, he spots Allie crossing a street and scrambles after her. Alas, he is left watching through a window as she dines with her new fiancé in one of Charleston’s fashionable eateries. The restaurant used here was High Cotton on East Bay Street near the waterfront. Warm, gracious and simply oozing with lowcountry charm, you can stare through the window like Gosling, but with food this phenomenal and reasonably priced, you’ll probably be wanting to eat here every night.

Earlier we visited the interior of the Hamilton’s summer home, now it’s time for the exterior. The antebellum plantation Boone Hall is a short drive outside of the city centre in the small suburb of Mount Pleasant. You’ll probably recognise the property before you’ve even reached the house itself though. In the film, Noah races through the driveway's canopy of live oaks in his pickup truck when he hears Allie’s family is leaving town, and smashes into the main gates. This wasn’t scripted; Ryan Gosling is said to have become a little caught up in the scene and crashed by mistake, but the director thought it was so dramatic, he left it in. I absolutely made my husband stand and stare in a longing fashion through the closed dates while I rocked on the veranda. It would have been rude not to. At the back of the plantation, you’ll see where Noah met Allie’s family for the first time during a lunch party, and the river in which the young couple and their friends played throughout the summer. 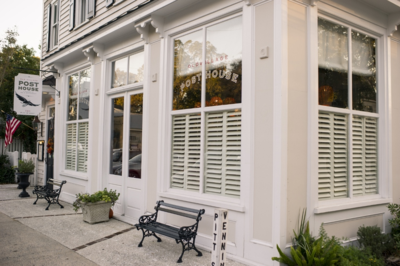 Before leaving Mount Pleasant, you should make a stop in the gorgeous little town of Old Village Mount Pleasant, which starred as Seabrook in the movie. You’ll doubtless recognise the old-fashioned shopfronts from the quintessential summer scenes montage and can make a stop at the Pitt Street Pharmacy, with its original soda fountain and diner counter, where you can grab an ice cream just like Allie and Noah. 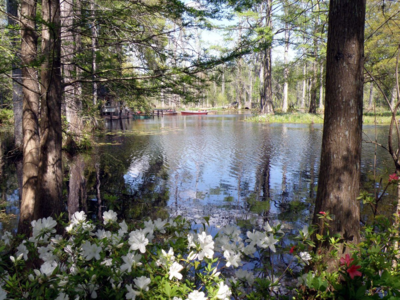 Leaving the best until last, Cypress Gardens was the setting for one of the most iconic (and romantic) scenes in the film. You can take your very own rowboat out through the cypress-lined backwaters used in the boat scene, where Allie tells Noah he’s different, but somehow the same after their years of being apart. While there won’t be a mass of swans during your excursion (they were brought in especially for the movie), the scenery is beautiful and the heavy, humid atmosphere out on the water is weighted with dramatic tension. If you’re lucky, it might start to rain and you can have your own ‘I wrote you 365 letters. I wrote you every day for a year!’ kissing sequence in the rain. While not essential, having your companion grow a Noah beard for this part of the excursion is encouraged.