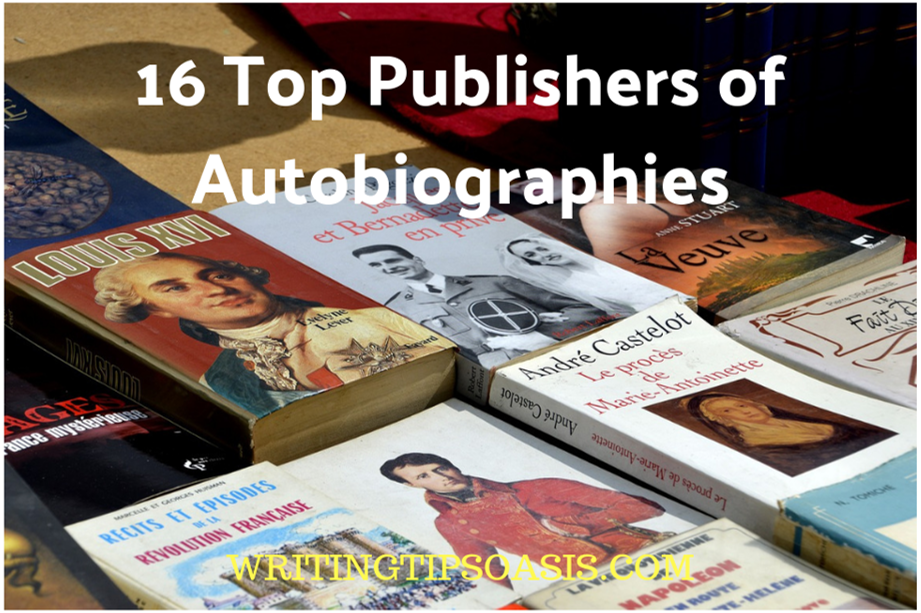 Are you an author who has written an autobiography about your life and you want to get it published?

Below we’ve featured 16 top publishers of autobiographies and have described those that are currently open to receiving submissions and those which are not.

The Crown Publishing Group is an imprint of Penguin Random House that specializes primarily in publishing nonfiction titles, including autobiographies. Some of their bestselling autobiographies and memoirs include “Becoming” by Michelle Obama, “Everything All At Once” by Bill Nye, “Tomorrow Will Be Different” by Sarah McBride, and Nobel Peace Prize winning “The Last Girl” by Nadia Murad.

Due to the high volume of submissions that they receive, they unfortunately do not accept unsolicited submissions or book proposals. If you’re an author with literary representation, you’ll have a better chance at being considered if you have your agent submit a query or book proposal on your behalf.

Aurora House is an independent publishing company based out of Bowral, Australia that specializes in both print and ebook formats. Aurora House also offers a wide variety of writing and editing services to help their authors achieve high-quality manuscripts prior to publication. They have an ever-expanding autobiography category and have published titles like “New Balloons” by Leanne Demers, “So Big the Land” by Sue Grocke, and “Rainbow People” by Barbara Woodward.

They are currently accepting unsolicited manuscripts for autobiography projects, which can be submitted either via email or through regular mail. Be sure to review their submission guidelines to determine exactly what you’ll need prior to submission. For general inquiries or more information, you can also contact the team at Aurora House through their website’s online contact form. 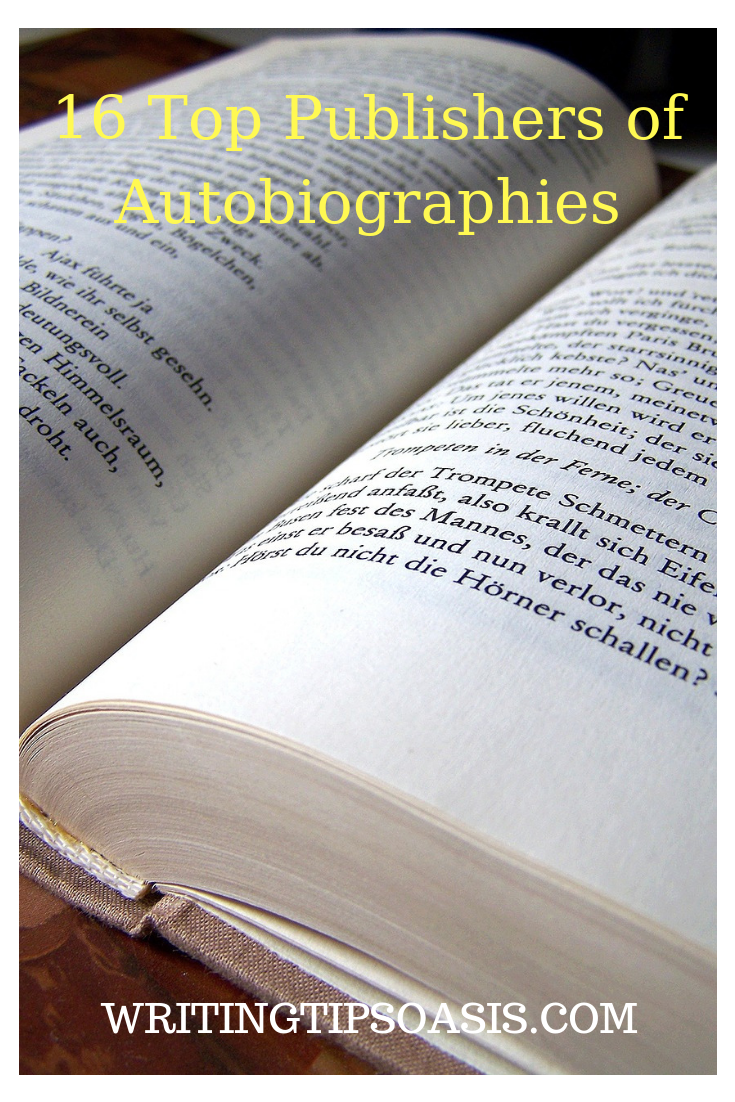 39 West Press is an independent publishing company that specializes in producing works of literary fiction, creative nonfiction, and poetry that promotes the voices and perspectives of minorities. They’ve published titles like “Meet the Deplorables” by Harmon Leon and Ted Rall, “Where Water Meets the Rock” by Lindsey Martin-Bowen, and “Tiny Chasm” by Jeanette Powers.

They have an open submission period between January 1st to March 30th, and are currently accepting manuscripts for autobiographies via email. They note that they do not accept projects of genre fiction, cookbooks, how-to books, or religious inspirational books. Be sure to review their submission guidelines before proceeding.

Ronsdale Press is an independent Canadian publishing house that was established in 1988 in Vancouver, British Columbia. They publish works of fiction, poetry, regional history, biographies, and autobiographies. Some of their autobiography titles include “A Brush with Life” by John Koerner, “Out of the Interior” by Harold Rhenisch, and “John Muir” by Daryl Ashby.

They are currently accepting unsolicited manuscripts for autobiography projects from Canadian authors only. For more information, be sure to review Ronsdale Press’ submission guidelines. Submissions must be sent via regular mail in hard-copy in order to be considered by the editorial team. For general inquiries or more information, you can contact the team at Ronsdale Press via email.

Weidenfeld & Nicolson is a UK-based publishing house that was founded in 1949, as is a part of the Orion Publishing Group. Primarily specializing in nonfiction, including history books, narrative nonfiction, sports books, biographies, and memoirs, Weidenfeld & Nicolson also publishes a handful of fiction titles. Some of their most recent releases include “Heal Me” by Julia Buckley, “Night Runners” by Richard Crompton, and “The Man in My Basement” by Waiter Mosley.

They are currently closed to submissions and do not accept unsolicited manuscripts. If you’re an author with literary representation, you can have your agent submit a book proposal or query letter on your behalf.

Established in 1991, Fernwood Publishing is a Canadian publishing company based out of Black Point, Nova Scotia. They publish books with the express purpose of educating their readers, but have expanded to include a wide range of well-written nonfiction books about social sciences, politics, and social work. They have a growing memoir and biography category which includes titles like “Ghosts Within” by Garry Leech, “Northern Wildflower’ by Catherine Lafferty, and “ Ohpikiihaakan-ohpihmeh (Raised somewhere else)” by Colleen Cardinal.

They are currently accepting book proposals from both agented and independent authors. They have a preference for projects that touch upon issues of activism, social change, economics, indigenous resistance and decolonization, international development, politics, social work, and women and feminism. Be sure to review their submission guidelines before proceeding. All book proposals can be submitted via email.

C&R Press is an independent publishing company that was founded in 2006. They publish a wide range of genres, including fiction, nonfiction, and poetry. Some of their most recent titles include “The Internet is for real” by Chris Campanioni, “Immigration Essays” by Sybil Baker, and “Credo” by Rita Banerjee and Diana Norma Szokolyai.

They are currently hosting a contest in search of highly-engaging and entertaining poetry, shorty story collections, creative nonfiction, and memoirs/autobiography projects. If you’re interested in submitting your manuscript for consideration, you can do so through their website’s online submission form. You can also find more information about their writing contest here.

Ara Pacis Publishers in an independent publishing company that is able to produce works in both traditional print and ebook formats to help their authors reach a world-wide audience, regardless of their preference in reading medium. Through their imprint, Bigio Morato, they also happen to publish memoirs and biographies.

They are currently accepting manuscript submissions and queries via email. They note that due to the high volume of submissions that they receive, it can take between three to four months to hear back from their editorial team concerning your project. Be sure to send a query letter, along with a short description of your book, an annotated table of contents, and three sample chapters for consideration.

Autonomous Press is an independent publishing company that loves to work with authors with unique perspectives and stories that challenge cultural norms and incite vigorous discussion and debate. They publish both fiction and nonfiction books, including memoirs. They’ve published books like “Nantais” by Verity Reynolds, “Monsters in my Mind” by Ada Hoffmann, and “Defiant” by Michael Scott Monje, Jr.

They are currently open to book proposals and query letters from both agented and independent authors. The best way to reach the team at Autonomous Press is via email.

Dream of Things is an independent publishing company that specializes in producing high-quality and engaging memoirs. Some of their autobiographical titles include “Betty’s Child” by Donald H. Dempsey, “Everything I Never Wanted to Be” by Dina Kucera, and “Leaving the Hall Light On” by Madeline Sharples. They are unfortunately not accepting unsolicited submissions at this time. They strongly encourage you to check back at a later date to see when they’ll reopen.

DreaMerchant is an independent publishing company that is currently looking for new authors to work and publish with. Founded by Beverly Richardson, they publish a wide range of genres about varying topics, including fiction and nonfiction, the latter of which includes autobiographies. Some of their recently released titles include “The Horror of Herring Hill” by Federick Louis Richardson.

They are currently accepting book proposals from both independent authors and agented authors. If you’re interested in working with DreaMerchant, you can submit a proposal through their website’s online contact form. Be sure to review their submission guidelines, as they ask that proposals should be limited to a maximum of 500 words.

Founded in 2009, Eunoia Publishing is an independent publishing company based out of New Zealand. They publish works of both fiction and nonfiction, and are especially interested in projects that touch on topics about culture, time, world philosophies, and interesting places. They’ve published works by Nicholas Sheppard, Ann Glamuzina, and Karen Breen.

The team at Eunoia Publishing are unfortunately not accepting unsolicited manuscripts at this time due to a high volume of submissions that they’re currently working through. You’re strongly encouraged to check back at a later date to see when they reopen. For general inquiries or more information, you can contact the team through their website’s online contact form.

Founded in 1974, Graywolf Press is an independent nonprofit book publisher whose aim is to discover new authors with exciting new stories to tell. Based in Port Townsend, Washington, they publish works of poetry, fiction, works in translation, and nonfiction titles. Some of their recent autobiographical titles include “The Red Parts” by Maggie Nelson, “After Confession” by Kate Sontag and David Graham, and “The Year of What Now’ by Brian Russell.

They are currently accepting submissions from literary agents on behalf of their authors. They unfortunately do not accept unsolicited submissions or queries from independent authors. If you’re an author with literary representation, you can have your agent submit a book proposal on your behalf. Be sure to review their submission guidelines before proceeding. For general information or inquiries, you can contact the team at Graywolf Press via email.

Open Books is an independent publishing company that was founded in 2007 with the express purpose of publishing high-quality fiction, nonfiction, and narrative poetry. Open Books boasts an impressive catalogue of autobiographies and memoirs, including titles like “Heartbeats” by James E. Tatooles, “The Sun King” by Allison Lee Palmer, and “Fresh Cut” by E.J. Bouinatchova.

They are currently accepting unsolicited manuscripts via email. For autobiographical projects, they ask that you include a cover letter with your contact information, a detailed outline about your manuscript, information about your marketing strategy (if applicable), and the first three chapters of your project for consideration. If they’re interested in your project, a member of their editorial team will reach out to your promptly to request your full manuscript for further review.

Other Press is an independent publishing company that specializes in publishing novels, short stories, poetries, and essays. They have an impressive catalogue of memoirs/autobiographies and are always looking to expand their list of titles. Some of their titles include “Hurry Down Sunshine” by Michael Greenberg, “My Brother Moochie” by Issac J. Bailey, and “Stranger in a Strange Land” by George Prochnik.

They unfortunately do not accept unsolicited manuscript, queries, or book proposals. However, if you’re an author with literary representation, you can have your agent reach out on your behalf via email. If interested, they will reach out to you promptly to discuss your project in more detail.

Rare Bird Books is an independent publishing company that was founded by Tyson Cornell in 2010, originally under the name Book Soup. Their main goal is to discover and develop new writing talent and to promote their work. They have an impressive catalogue of autobiography titles, including “Burn My Shadow: A Selective Memory of an X-Rated Life” by Tyler Knight, “Cocaine + Surfing” by Chas Smith, and “Doing Time Like a Spy” by John Kiriakou.

They unfortunately do not accept unsolicited submissions. However, if you’re an author with literary representation, you can have your literary agent submit a query letter or book proposal on your behalf. If interested, a member of Rare Bird Books’ editorial team will reach out to you promptly. For general inquiries or more information, you can contact the team at Rare Bird Books via email.

Are you aware of any other publishers of autobiographies? Please tell us about them in the comments box below!

K. Z. Kwan is a freelance writer based out of Halifax, Canada.