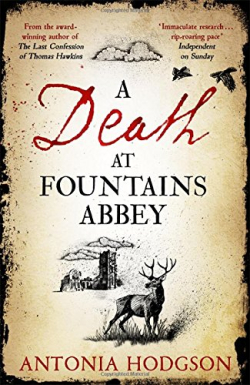 It's late spring in 1728 and Thomas (Tom) Hawkins has no choice but to leave his beloved life in the chaotic streets of London and take the arduous journey to Yorkshire to stay with John Aislabie, one of the wealthiest and notorious men in England. Loathed by most of the country after his involvement with a financial disaster that saw many wealthy and other less financially lucky people losing everything, John Aislabie’s life has been threatened. Now, Tom must discover who is behind the threats and shocking incidents occurring at John Aislabie’s home.

The book begins with a shocking incident that happens twenty-seven years before Tom travels to Yorkshire. The event mars the Aislabie household in more ways than anyone could have expected and the pain and anguish of that time still resounds with those on the estate. When Tom arrives, he discovers it’s not simply a threat to his host’s life that he must deal with or the hatred for the man increasing each day, but also the loyalties between members of the household and their suspicion of him.

The story is inspired by real characters and I loved the relationships between Tom, his ‘ward’ Sam, who might only be fourteen but is years older when it comes to reading people’s characters; Tom’s relationship with his ‘wife’ Kitty. John Aislabie’s family is a complicated one, from his bold, confident wife, to his reserved daughter, strange cousin and his close relationship with his male secretary, who I found completely fascinating. The research, setting, history of the characters and the connection to real events was enthralling.

This book is the third in the Thomas Hawkins series and I must say it’s the one I’ve enjoyed the most. I read it in two sittings and thoroughly enjoyed getting to know the array of intriguing characters as well as trying to figure out – and failing – who was/were responsible for the shocking deeds being carried out at the hall. Although this book is the third one in the series, it’s also a standalone story so you don’t need to read the first and second books before enjoying this one.

A page turner full of suspense and intrigue, I loved it!

FIND OUT MORE ABOUT A DEATH AT FOUNTAINS ABBEY