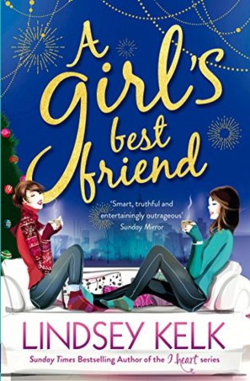 I bloody love Lindsey Kelk, you guys! She is an absolute hoot and her books are so fresh and funny, and adding a festive touch to her latest one makes it all the more perfect. A Girl's Best Friend is the third part in the About a Girl series and follows on from Tess' adventures in Milan in What a Girl Wants. While this could potentially be read as a stand-alone, I recommend reading the books in the right order. Not only to fully understand the backstory of all the characters involved, but also because these are Lindsey's best novels yet and you don't want to be missing out on any of them.

Despite all the crazy situations Tess ended up in, the first two stories were kind of breeze for her as she found herself in her dream job as a photographer in stunning locations such as Hawaii and Milan and with two hot men to pick from. But Tess' luck seems to have run out and now she's back in miserable London, crashing in her best friend's Amy's room while her friend is making a life and career for herself in glamorous New York City. And Tess hasn't spoken to either of the potential love interests from the previous novels, Charlie and Nick, in months either. She is lonely, and with no well-paying gigs coming up her agent is ready to drop her if she doesn't book a job – fast.

It sounds like a pretty miserable starting point for a story and it certainly isn't fun to see this lovely character down in the dumps, but when Tess decides to book a last-minute trip to New York to visit Amy and spend Christmas in one of the most magical city in the world, everything turns around. Not only is she determined to enter an important photography competition there that might help her get her career back on track, but some quality time with her friends really does her good. Oh, and then there is the fact that Nick lives in New York and this wouldn't be a Lindsey Kelk novel if the lovers don't hilariously run into each other…

There is little I can say about Lindsey's latest novel that I haven't already said about her before; her characters are incredibly realistic and relatable, they end up in the most ridiculously laugh-out-loud funny situations, and her writing is such fun. She always makes me snort out loud on my commute and that is no mean feat when I'm in travelling home in an over-packed and delayed tube after yet another stressful day of work. Lindsey’s novels are the perfect remedy for the current miserable London weather and the miserable Londoners that result from that.

And while her books normally already make me wish I was a fictional character, just so I can hang out with Tess, Amy, Kekipi and the rest of the gang, oh my god A Girl's Best Friend made me want to crawl into the pages and party with them even more than before. Because not only are all the great characters from the previous books back, with the action having moved to New York there is the most insane collision of awesomeness when Tess meets Angela, Jenny Lopez and even Delia and Cici Spencer. My mind would have exploded if I wasn't so desperately focused on whether Tess would get back with Nick, or Charlie, as I needed a fully functional brain for when she would make that long-awaited decision.

I am on the verge of embarrassingly gushing all over this book, so I'll leave you with this: If there is one novel you want to be gifting yourself, your sister or your best friend for the upcoming holidays then let it be this one. A Girl's Best Friend is filled to the brim with crazy happenstances and the colourful language that makes this a telltale hilarious Lindsey Kelk novel. It's basically a gigglefest from start to finish, with hot boys thrown in for good measure. And what more could you possibly want for Christmas?