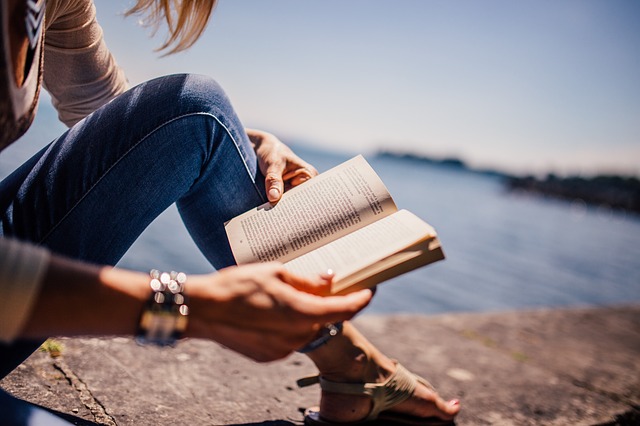 At times it seems like celebrities have it all. But as most famous people will tell you, the path to success is not always paved with diamonds and gold.

Movie stars, comedians, musicians and even models have turned to the written word to tell their stories, which are not always filled with the glitz and glamour we so often associate them with.

You may be surprised to find that some celebrities have not written memoirs but have authored works of fiction worthy of print, even without the famous name attached to them.

Written with honesty, wit and charm, the 21 works below are celebrity books with reading. They will inspire you and you may find you have more in common with these famous faces than you once thought!

Born in Pennsylvania, Tina Fey has become a household name for her wit, charm and uncanny impersonation of former presidential candidate Sarah Palin on Saturday Night Live. Recognition for her work can be found through Fey’s receiving of eight Emmy Awards, two Golden Globe Awards, five Screen Actors Guild Awards and four Writers Guild of America Awards. She was even nominated for a Grammy Award for her memoir Bossypants (published in 2011), which topped The New York Times bestseller list for five weeks. If you’re a fan of Liz Lemon, Fey’s character on 30 Rock, and enjoy a good laugh, Bossypants is a must read.

One can’t think of Tina Fey without soon thinking of Amy Poehler as well. Poehler is another Saturday Night Live alumna who published her memoir, Yes Please, in 2014. From 2009 to 2015, Poehler starred as Leslie Knope in the sitcom Parks and Recreation, for which she won a Golden Globe Award for Best Actress in a Comedy Series. Yes Please is an honest and hilarious collection of stories, photographs and advice that everyone should read.

3. Stories I Only Tell My Friends by Rob Lowe

Known for his dashing looks and on-screen roles like Sodapop Curtis in The Outsiders, Rob Lowe published his first memoir in 2011. This book delivers an insightful look at what it’s like to grow up in the spotlight and how Lowe landed a career-defining role in The West Wing. He has since published another memoir titled Love Life, which details various stories including the time a major movie star stole his girlfriend. It is definitely a celebrity book worth reading.

4. Is Everyone Hanging Out Without Me? by Mindy Kaling

Published in 2011, Kaling’s first memoir is filled with hilarious stories of an awkward youth and rise to fame. Born in Cambridge, MA, Kaling is known for her role as Kelly Kapoor on the hit comedy, The Office. At just 36-years-old, Kaling is also the creator and star of the Fox and Hulu sitcom The Mindy Project, and also serves as executive producer and writer for the show. Her second book, Why Not Me?, covers events that have happened in her life since 2011, and was published on September 15, 2015.

This Texas-born, award-winning comedian and actor is known for his quick wit and hilarious sketches on SNL, but did you know Steve Martin is also the author of a NYT bestselling novella? Published in 2000 and later turned into a movie, Shopgirl is a sweet, yet sad romantic tale of a 28-year-old girl in California struggling to get her life together. At just 130 pages, there’s no reason not to discover Martin’s incredible talents as a fiction writer.

6. Down Came the Rain by Brooke Shields

A New York native, Brook Shields began her career as a model when she was just 11 months old. She won the People’s Choice Award in the category of Favorite Young Performer in four consecutive years from 1981 to 1984. Her memoir, published in 2005, details her harrowing journey through postpartum depression after the birth of her daughter. Even the rich and famous have real struggles and this brave memoir is an inspirational work.

7. Notes from My Travels by Angelina Jolie

Famous actress, filmmaker and humanitarian Angelina Jolie is also an author. Published in 2003, Notes from My Travels offers compelling snapshots of Jolie’s visits to refugees in Sierra Leone, Tanzania, Pakistan, Cambodia, and Ecuador. She may be a Golden Globe award-winning actress, but Jolie’s most prized work is done off camera as a Special Envoy for the United Nations High Commissioner for Refugees (UNHCR). You can learn a lot from this mother of six through her inspiring and courageous travel notes.

Perhaps the most famous twins in the world, Mary-Kate and Ashley are now 29-years-old and authors of Influence, published in 2008. Everyone loved them as infants playing Michelle Tanner on the well-known television series Full House. Their book is about their influences in fashion and style, and includes interviews with Diane Von Furstenberg and Christian Louboutin. If you have an interest in fashion, or are just a fan of this duo, pick up this book today.

Is there anything that James Franco hasn’t done? Actor, filmmaker, artist, professor, philanthropist and author, Franco is a man of many, many talents. His book of short stories, Palo Alto, was published in 2010 and traces the lives of a group of teenagers who struggle with the intricacies of growing up. Vogue critics called the stories “compelling and gutsy.” You’re missing out if you don’t read the writings of this Golden Globe winning actor.

Born and raised in New York City, Stallone may be best known for his role as boxer Rocky Balboa in the Rocky series’ seven films. He’s also the author of Paradise Alley, a fictional novel published back in 1978 that was later turned into a film in which Stallone starred and directed. Stallone has since said that writing this novel, which is about three brothers in 1940s NYC who become involved in professional wrestling, is what inspired him further to write the story of Mr. Balboa.

Barrymore is a mother of two, actress, director, model, producer and author — and she’s only 40! Published in October 2015 and written with humor and honesty, Wildflower, is a collection of this award-winning actress’s challenges, triumphs and adventures. She also authored an autobiography in 1990, Little Girl Lost. In 1997, Barrymore formed the production company, Flower Films, which produced Never Been Kissed, Charlie’s Angels, 50 First Dates and Donnie Darko. If you’re a fan of her work on screen, chances are you’ll enjoy her book as well so pick it up today!

With nearly 2 million followers on Twitter, Jane Lynch is much loved actress, singer and comedian. Happy Accidents was released in 2011; Lynch was inspired to write the book after contemplating on the successes she had experienced over the previous year and wishing she could have told her younger self who was anxious, to not worry as much as she did. Lynch writes honestly about her years as an alcoholic and overcoming her addiction to alcohol. This line from her book will surely have you wanting to read the rest: “If I could go back in time and talk to my twenty-year-old self, the first thing I would say is: “Lose the perm.” Secondly I would say: “Relax. Really. Just relax. Don’t sweat it.” If you’ve ever felt overwhelmed, anxious and/or completely and utterly lost, pick up this book…now!

13. What Falls Away by Mia Farrow

This 70-year-old mother of 15 (yes, 15!) is an actress, activist and former fashion model. Her memoir, What Falls Away, was published in 1997 and details her life from the earliest of memories in heartbreak, success, pain and humor. Farrow, who was briefly married to Frank Sinatra in the 1960s, is also a UNICEF Goodwill Ambassador and co-founder of the Olympic Dream for Darfur campaign. If you’re looking for an inspirational read written by a woman of many talents, you won’t be disappointed by What Falls Away.

Born in Boston in 1929, Barbara Walters is an award-winning author, journalist and television personality. She published her memoir Audition in 2008, a year after receiving her star on the Hollywood Walk of Fame. Walters was a pioneer for all women in broadcast news, becoming the first female co-anchor of any network evening news broadcast. This best-selling biography details her journey through life both personally and professionally, including behind the scenes accounts from recent interviews.

Former fashion model, fitness guru, actress, author and native New Yorker, Jane Fonda is a force to be reckoned with. In her candid memoir published in 2005, My Life So Far, this two-time Academy Award winner reveals intimate details with unflinching wit and candor. The NYT called her memoir “achingly poignant.” Fonda is also an outspoken political and environmental activist.

Former Governor of California, this Austrian-American actor, model, philanthropist and businessman has led quite an interesting life. The “terminator” Arnold Schwarzenegger is a Golden Globe winner who was crowned “Mr. Universe” at the age of 21. Total Recall is a memoir in the voice of the same man who made the line “I’ll be back” so famous. From his descriptions of his early business efforts selling ice cream in the summer and ditching school to panhandle, Schwarzenegger admits to his mistakes and inspires readers through his triumphs.

This Canadian-American actor is also an author, producer and advocate. You may know him as Marty McFly from the Back to the Future trilogy or perhaps from his guest roles in Boston Legal, Scrubs and Curb Your Enthusiasm. In 2002 he published his first book, Lucky Man, in which he candidly talks about the struggle of being diagnosed with Parkinson’s disease, how he stopped drinking and embraced the opportunities he’d been given as a result of his diagnosis. His foundation, The Michael J. Fox Foundation, helps to advance every promising research path to curing Parkinson’s disease.

18. Then Again by Diane Keaton

Born and raised in LA, Keaton is famous film actress, director, producer and screenwriter. Her memoir, published in 2011, was named one of the best books of the year by The Financial Times and the Chicago Sun-Times. One of her most famous roles was in Annie Hall where she starred opposite Woody Allen. Then Again is a memoir about her mother and herself; a tale of living the American dream that anyone could relate to, regardless of whether or not you’ve won an Academy Award.

One of the funniest women alive today, DeGeneres has won 14 People’s Choice Awards and somehow has managed to find time to author four books. This Louisiana-born comedian starred in the popular sitcom Ellen in the early 1990s and now hosts her daytime talk show, The Ellen Degeneres Show, which has won 36 Emmys. Her most recent book, Seriously…I’m Kidding, was published in 2011 and is a hilarious collection of Ellen’s musings that will have you doubled over in fits of laughter. Ellen earned her star on the Hollywood Walk of Fame in 2012.

With over 600,000 followers on Twitter, this rock and roll star is a founding member of the Rolling Stones and has also starred in the movie Pirates of the Caribbean: At World’s End.  Richards is notorious for his past drug use, admitting to using heroin among other substances. His memoir, Life, details his struggles, triumphs and unique lifestyle from relationships with various women to his relationship with Mick Jagger and his discovery of blues music. Whether you’re a fan of rock and roll or music in general, or you’re just looking for an interesting memoir to read, Richards’ is not to be missed. The memoir was written with the assistance of journalist, James Fox.

What did you think of our list of celebrity books worth reading? Which other ones do you know of and/or have read? Please share in the comments box below!