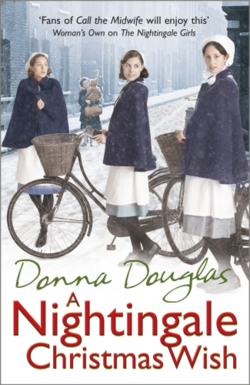 It is November 1938 and there are murmurs of another war on the horizon. Frannie, a ward sister at the Nightingale Hospital, wants nothing more than for peace to remain. She’s lived through one war and the last thing she wants is for her country to join another that will wreak devastation.

Nurse Helen has just been promoted at the hospital but she is feeling out of her depth, especially when she feels bullied by one of the doctors. A young widow, Helen doesn’t think she will ever find love again, nor does she want to until she meets a handsome young man who injects a bit of life into her again.

Kathleen, a Matron at the hospital, is hard working and caring and always puts the hospital, its patients and its staff first, even when her own health begins to suffer.

A Nightingale Christmas Wish is the fifth in the Nightingale series and although I have haven’t read the previous books, I didn’t feel like I was missing anything from the story. I immediately felt for Frannie as the story opens at the beginning of the First World War, as Frannie says goodbye to her fiancé at the station as he leaves to fight for his country. I felt a real sense of foreboding and worried that Frannie would be left heartbroken along the way. When the next chapter starts, we are in 1938 and my fears were confirmed. Frannie was left devastated by that war, so is passionately against the idea of entering into a second war.

I also felt for Helen, who was still grieving over the death of her husband two years before. She is still young but doesn’t want to even think about loving anybody who isn’t her husband, Charlie. I thought the relationship she had with Charlie’s mother was lovely and went some way to making up for her own formidable mother, Mrs Tremayne, who has quite a reputation at the hospital that is in no way positive and sometimes hinders Helen.

I was little disappointed by the lack of festivity within the book, given the title. Although part of the book does take place over Christmas, it was only a very small portion and not enough for me to consider it a ‘Christmas read’ as I assumed it would be. There were also a lot of characters to get my head around, which I found confusing at times, especially at the beginning.