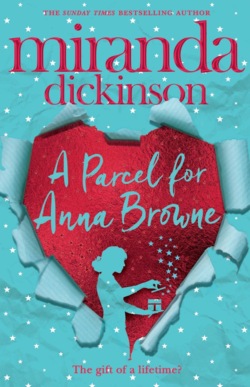 I love receiving post, and I am sure I'm not the only one! Of course I am not talking about bills or the endless flyers for takeaway food, but rather packages of the bookish variety, birthday gifts from overseas and quirky postcards from my family; these are the proverbial rays of sunshine that make coming home from a stressful day at work to a covered doormat such an utter joy. Receiving mail is lovely when you expect it, but there is an even more special feeling of happiness reserved for surprise packages to brighten your day, and it is this flutter of excitement that the aptly titled A Parcel for Anna Browne takes its inspiration from.

Anna Browne is an ordinary woman working as a receptionist at one of the biggest newspapers in the country. Her job isn't glamorous and she lives a quiet, unassuming life, usually going straight home after work for some cosy time with herself or one of her friendly neighbours. For most people living in the bustling city that is London, the fact that Anna is content doing so little is incomprehensible, but after a tumultuous childhood Anna finds the peaceful life she has cut out for herself rather perfect.

All of this changes however, when she starts receiving packages at her office. Despite the security guard's insistence that something sinister is going on, Anna takes delight in the surprises from the anonymous sender. The gifts are incredibly thoughtful and remind her of the rare happy moments in her childhood, and as she stars wearing the first items, which include a scarf and beautiful brooch, Anna finds her confidence blooming as a result of the compliments she gets on her new accessories. But curiosity slowly takes a hold of her and starts wondering who is sending the packages. Could it be the handsome reporter she's had an eye on for ages, or is it someone else entirely that has made it their mission to tempt Anna out of her shell?

In commercial women's fiction, to me one of the most important parts of a novel is the protagonist and how likeable they are – and Anna Browne, despite her ordinary name and initially perhaps ordinary life, embodies everything I look for in a main character; a gentle kindness, a mysterious background and, most of all, an interesting journey as the story progresses. If there is anyone who deserves to receive surprise mail to brighten up their day it is Anna and so with each new package that arrived for her, I felt the same flutter of excitement as the character and I willed her to open it up as soon as possible as I was curious what delight was hidden within this time around.

Just like me, Anna opened her packages incredibly carefully, relishing the thoughtfulness that had gone into the meticulously folded corners and the sheets of crisp tissue paper protecting the gifts within. Author Miranda Dickinson's descriptions of these scenes were incredibly detailed and vivid and I felt like I was right there with Anna, witnessing the slow revelation of each of the prized gifts. I maybe wasn't the one receiving an unexpected package in the post that time, but I felt the same  shimmer of excitement from when I do, through the incredibly realistic representation within the novel.

Of course the book didn't just consist of Anna unwrapping gifts (although I'd totally read that), there were some very 'interesting' characters too, such as crime-obsessed security guard Ted, and I loved the storylines involving reporter Ben and neighbour Jonah as well. I also thought that the mystery surrounding both the packages and Anna's childhood were set up exceptionally well. Miranda Dickinson revealed just enough throughout the chapters to keep the story going, without spoiling everything straight away. I do admit that from very early on in the novel I had a pretty solid suspicion about who was sending the packages – and I was right – however, two or three times I doubted myself when another likely candidate made an appearance, there were some very convincing red herrings thrown in.

I think I may use the word 'lovely' too much sometimes, but I do believe that is the perfect description for this sweet novel. A Parcel for Anna Browne is a heartwarming charmer and a great read to cosy up with while, perhaps, keeping one eager ear on the hallway in case that exciting thump of a package falling on the doormat makes a surprise appearance.